In the final 4 months of 2018 there were over 40 central banks interest rate hikes from around the world despite clear global slowing throughout 2018. In the past 4 months over 40 central bank rate cuts have occurred. More rate cuts are coming, as investment markets are leading the fed and demanding it with near 100% consensus. In the 1930’s, when most currencies were fixed to precious metals, countries aggressively engaged in competitive currency devaluations to stimulate by  restricting imports and elevating exports. The panic had already begun by 1930 and the beggar thy neighbor policy of currency devaluations, as it was labeled, exacerbated a global recession that became The Great Depression. Only World War II could restart the engines for a complete global recovery. Today we have almost 50 years of free floating currencies backed by blind faith in Government to prevent all economic forest fires from burning out of control. When the fires from the global mortgage debt crisis brought the world system to the brink in 2008, we couldn’t devalue free market currencies, so the world cut rates and printed about $13 Trillion of money out of thin air to backstop the banks. When we say printing money we are referring to money created and sold by the Government and bought by the same Government creating currency to add reserves to banks for easy money lending policies. As it was the only play in a weak poker hand, the markets were all in for the 10 year Quantitative Easing recovery phase that has ensued. Now that the longest and perhaps slowest recovery in history has been reached, we are at another extreme of high anxiety and weak growth. Instead of currency devaluations, this time we have beggar thy neighbor rate cuts occurring in order to keep the economic engines running. With so many Trillions in fake money and an economic cycle slowdown ending later in 2019 ideally, Central Bank rate cuts will continue.

The economic tea leaves foretold by natural business cycles have been warning of choppy waters ahead. While many economists have assumed the 4 year business or Presidential cycle would generate a Recession ending in 2020, we continue to feel the consumer is too strong and the labor shortage too dire to allow an economic (GDP) contraction to manifest. The unknown caveat emptor is how far China and Trump escalate the trade war and how scared consumers become. So far consumers feel strong. The service sector and consumer data have been resilient this past decade and have smoothed the overall GDP data, but the manufacturing side can reveal more clarity to the economic cycles. Examining Midwest Manufacturing changes we see a couple well defined industrial contractions that indicate a slowdown ending in the 2nd half of 2019 or early 2020.

Using the Global Manufacturing and Service Purchasing Managers Index (PMI) we again see a cycle of roughly 3.5 years. Allowing for Trade War uncertainty extending cycle lengths, we estimate these proxies point to a 3.5 to 4 year low by late 2019 to mid 2020. This low may see an outright contraction or recession in the manufacturing sector globally, but the larger non-manufacturing and service sectors are still in expansion mode with a an optimistic consumer blowing into our economic sails. 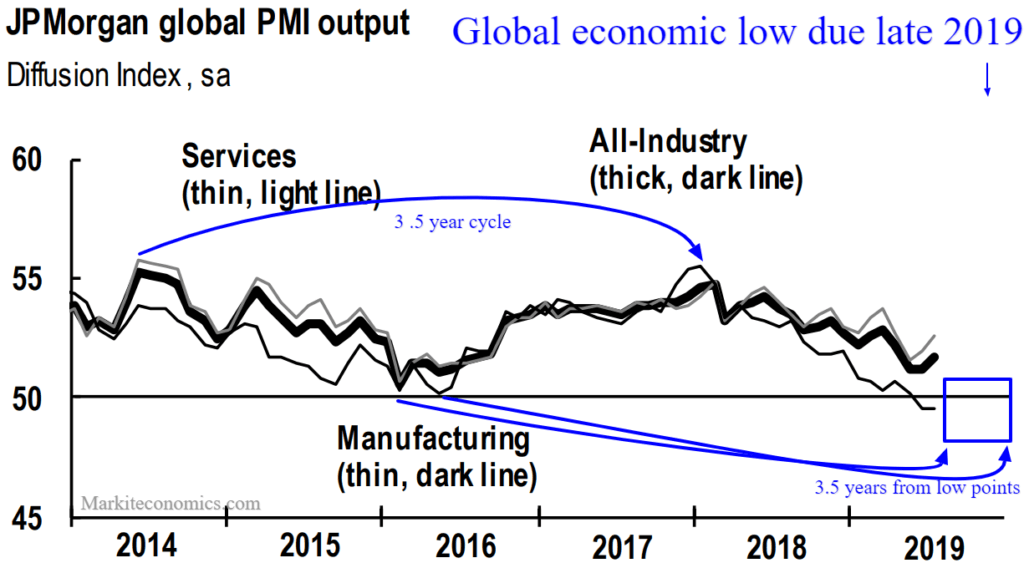 Most of our major trading partners and particularly the US, are consumer based economies. Near full employment, ever cheaper borrowing costs and persistently strong consumption trends make a Recession difficult to achieve. Redbook same store sales remain excellent near 5 percent growth, at the high end of previous expansion cycles. Today’s Unemployment Claims were very low once again with no hint that unemployment is going to rise anytime soon. Job openings continue to surprise economists with near record unfilled jobs as businesses still lament an inability to find workers. Recessions should be preceded by new Hires (supply) above Job Offers (demand) and currently we have a major surplus of demand above the supply of labor. 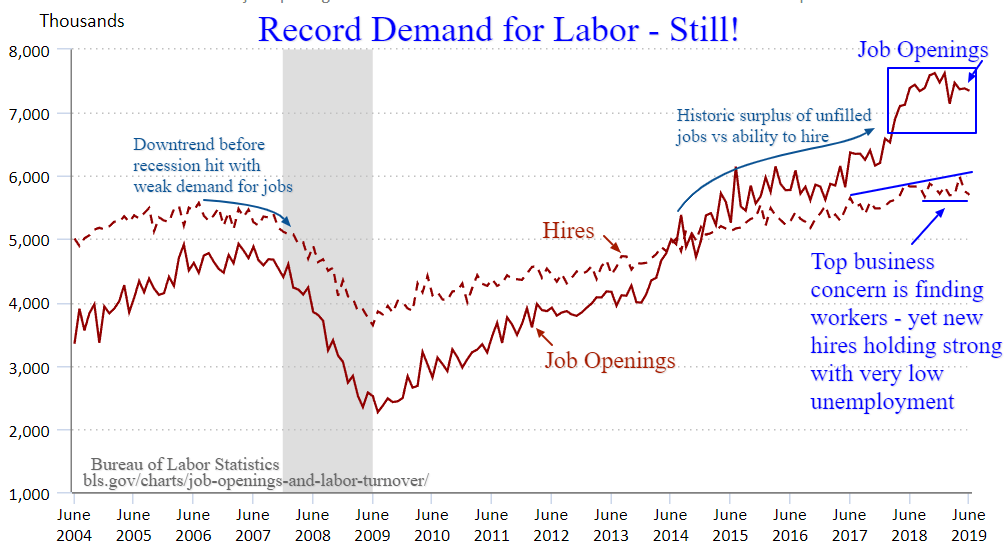 Finally, we can see that not only are consumer balance sheets very strong, but workers are optimistic near 20 year highs in sentiment. Should Michigan consumer surveys fall under 90 we would expect to see a GDP approaching 1% and lower stock prices, but its premature to assume the worst when 70% of the consumer based economy has shown no sign of an impending contraction yet. For now its a slowdown into late 2019 without recession which will spur even lower interest rates in an effort to stimulate and a flight to safety as economic uncertainty levels rise. 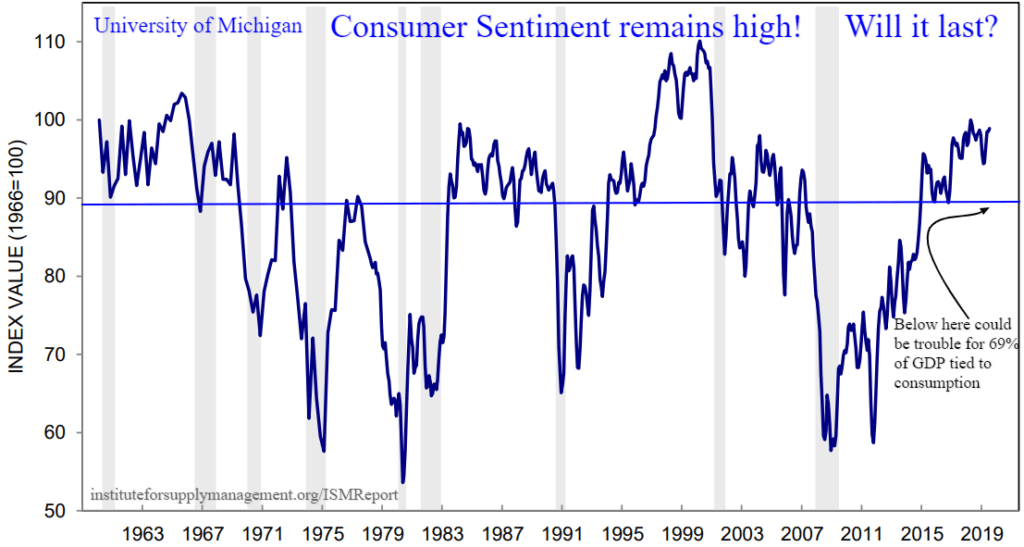