Scary headlines have been dominating the news for over 2 years. One wonders if the old normal will ever return with unbridled optimism and unrestricted travel. Just when an elusive post Covid reopening was upon us, inflation surged to 40-year highs, Putin invaded Ukraine and consumers are being told to prepare for an economic Recession.  Recent surveys show 75% of the public say the economy is bad and 68% of CEO’s say we are in recession now or will be by year end. This seems a bit surprising with a record labor shortage and continued expansion in the Service and Manufacturing sectors. The strong Chicago Purchasing Managers Index is a good barometer of our economy and shows a modest slowdown from extreme overheating to just mildly overheating. No sign of recession here!

Some of the regional Federal Reserve Districts show weakness or modest contraction, but remember that a contracting economy does not equal a recession. The Red Flag for a Recession would be if the current high level of labor demand shifted to net firing of workers. The trend is negative, as would be expected, but unfilled job openings remain very elevated and companies are aggressively “trying” to hire.

The US is far from a recession according to the Composite of Leading Indicators (LEI). While Consumer Confidence is severely depressed due to the constant barrage of inflation, war and Covid headlines, businesses are still trying to grow to meet demand. The US LEI has rolled over, but remains far from the danger zone of a severe slowdown. This chart echoes what we see in our G7 major trading partners. We definitely expect further slowing, but this cycle is unique in that the current weakness in the economy is due to an inability to increase production instead of the normal excess of supply. An example would be pilots and air traffic controllers. Americans would spend more to travel if we had enough workers to service this demand. Thus airlines are canceling hundreds of flights daily. Can there be a travel recession if the industry is still hiring, not firing, workers? Again, an industry or general contraction is not a recession if unemployment is low and job openings are high, according to the official arbiter of recessions. 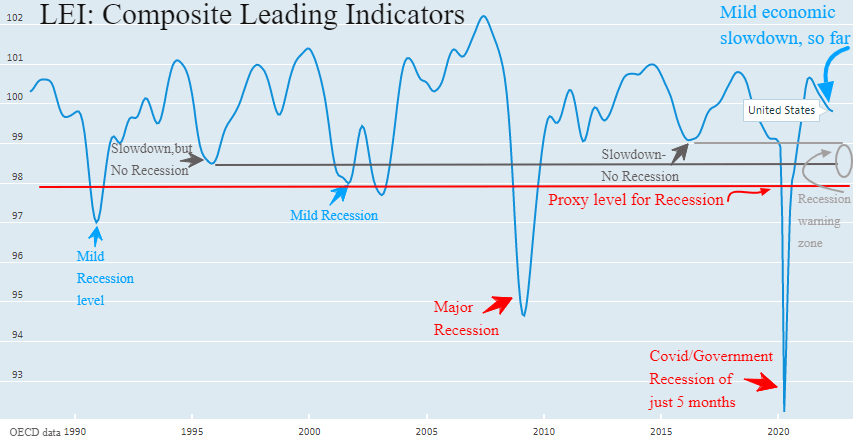 The very low ISM Customer Inventory chart below is another example of how we can witness a slowdown because demand is too strong, not too weak, leading to shortages. New Orders are currently falling, but companies lack enough stock for their customers which will keep production levels and employment at healthy levels. 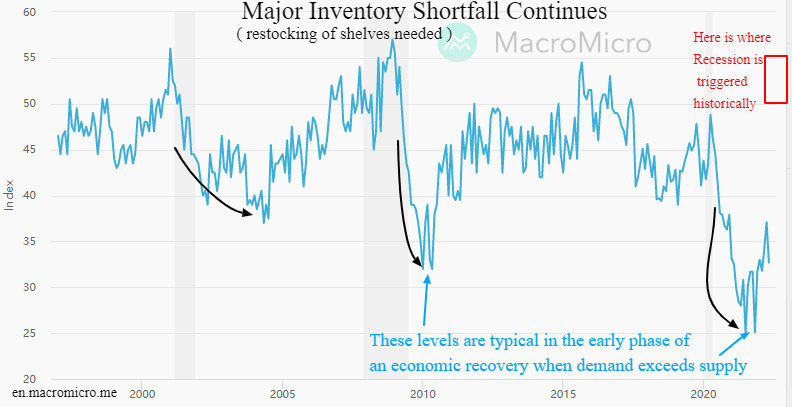 Shortages of Baby Formula, feminine hygiene products, insulin, pilots… are examples of extreme demand over current supply, which of course equals supply chain inflation. Our own experience is another example of the widespread shortages in the world. For the past two years there have been no mountain bikes to rent in Oregon due to Covid. Today it was confirmed that there will not be enough inventory to rent bikes until 2024, according to the manufacturers. This is exactly the opposite of what one would expect with a pending recession. As a final example of excess demand in the system, a global manufacturing partnership we are involved with is still experiencing record order backlogs and a desperate need for more workers. Eventually the economy will weaken enough by the middle of 2023 to risk a “possible” economic recession where unemployment rises sharply, but the hysteria seems a bit premature. Are we currently in a recession, even if GDP contracts during the first half of 2022? No! However, commodity markets are rolling over and supply chains are easing as the Fed cools excess demand to conquer untenable levels of inflation. Today’s inflation report for May reveals a 3rd month of decline to 4.7%. A couple more months of falling inflation may cause the Fed to pause its tightening cycle and trigger rumors of future easing to fight a recession that is nowhere in sight currently. Once Oil falls under $80 to $90 a barrel, it’s likely the stock market will begin anticipating an end to the current Bear market. We still have significant energy price concerns for this winter due to Russia, but for the short term we are due for a summer relief rally in stocks assuming China continues to reopen.

Does Exxon Have More Money Than God?