Low Wage Workers Get No Respect

Every election cycle we hear a crescendo of complaints that the poorest workers, the average Joe, are being left behind while the rich get richer. While historically the income gap between rich and poor rises when the economy grows and narrows when the economy contracts, equality seekers should feel some satisfaction that low wage workers are actually increasing their take home pay at a faster rate than high earners this cycle. The bottom quartile of laborers have been growing incomes at a relatively high 4.5% rate while the top quartile is increasing their earnings at only a 3% clip. The bottom 25% or workers are mostly comprised of entry level workers in their 20’s, which is where the greatest shortage of labor resides. Such rare out performance over the past 5 years of low wage workers above high wage is a good sign that unemployment is unlikely to surge anytime soon without some exogenous geopolitical event. It also supports the consistent consumption trends that have kept the economy growing at a healthy pace for almost 11 years straight, even when the manufacturing sector is periodically flat-lining as it is currently. 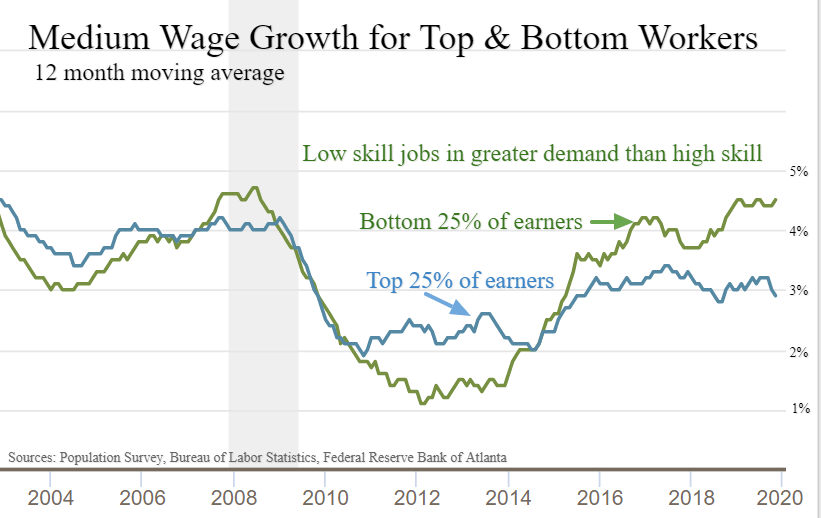 The industrial segment of the US economy has been decelerating for over year and now contracting compared to a year ago, yet Job Openings remain near a record gap above the rate of Hiring. Most of this unusual relationship is due to the strong demand and short supply of young entry level labor at the lower end of the wage scale that began surging in 2014. Until Job Openings shrink closer to the Hiring rate we would expect continued healthy wage gains and optimistic consumer spending.

While the low wage entry level jobs are elevating the overall number, at least the total hourly earnings are increasing at similar rates of past expansion cycle peaks. What’s more satisfying about the current condition is that, like the 1990’s, we are seeing strong wage gains by production workers during a period of very low inflation. Full employment, rapid rise in earnings with low inflation is a healthy brew for the consumption pot.

A Recession is the normal way that income gaps shrink, so we should be pleased that our record uninterrupted 10+ year GDP  growth phase continues to have traction in large part due to demographics and secular labor shortages. Given that consumption by our labor force is roughly 70% of our economy, the extremely low unemployment rate with record job openings should spur continued rapid wage gains and consumer spending at the low end to prevent a Recession.

‘It’s a Wonderful Life’ for Stocks Ignoring Christmas Past