Fed Admits It Has No Clue

September 22, 2016 Newsletter, Speculator, US Economy, US Jobs No Comments
0

Hold the presses: Bond Bear Market has been averted!

Today’s Non-Decision on the Federal Funds Rate was a surprise only to the intractable 12% of myopic analysts who want the Fed to get out of the business of printing dollars regardless of economic risk. The most interesting comment by Fed Chair Janet Yellen was her admission that she and her  prestigious voting members don’t have a clue why inflation and capital investment spending have not returned to loftier levels.

Wow! Really? One may ask how theses elite economists can expect a significant 250 basis point credit tightening over the next couple of years in an economy muddling along just above “stall” speed with no clue why inflation and capital expenditures have failed to rise as expected from their massive monetary stimulus.

One explanation is: In a western world of aging consumers creating a long term environment of excess capacity we also have a global energy bubble that exploded.  It was a tech bubble peak in 2000, a mortgage bubble top in 2007 and ironically an Oil bubble in 2014 that burst. Ironic in that the pinnacle of each mania was approximately 7 years apart with ensuing liquidations halted in less than 2 years. The Fed myopia sees a low Fed Funds interest rate at zero which has failed to stimulate rising inflation and capital investment. They assumed cheap credit would gift a massive tax cut proxy upon businesses and consumers encouraging faster economic growth rates, expanding factories and surging inventories. As we can see here, inflation has remained well below expectations and capacity utilization rates went from OK during the shale boom to dismal during the shale induced energy bust. Monetary buffers have prolonged normal liquidation rates to normalize supply and demand.

Looking at non-durable goods inventories, led by oil and coal, we have witnessed a 2 year inventory liquidation that is more typical of a recession. The retail inventory to sales ratio rose however, which belies the robust consumer services sector that has sustained our economy. Prices of the hardest hit sectors in agriculture, mining and energy all bottomed – so far – in 2016. Once we get a year past these lows, comparable earnings and restocking should create growing tail winds for the general economy into 2018. 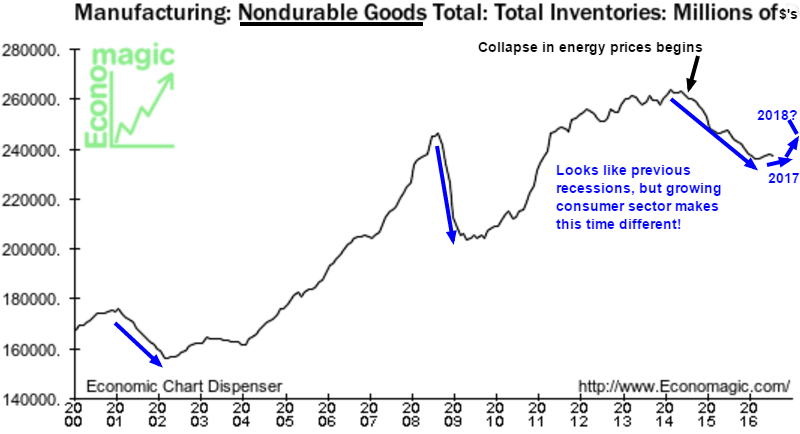 With Central Banks, led by our Fed, adding almost $13 Trillion of assets to their balance sheets with money that doesn’t exist, we have avoided an actual recession. The Quantitative Easing (QE) safety net may have been what has kept the global trade system from the “normal” panic recession that might have become manifest after world Oil prices fell almost 80%. Earnings and exports – global trade – have been falling for over 5 quarters and should turn higher in 2017  as consumption finally begins to absorb capacity and supply and demand achieve a sense of parity allowing capital spending to rise again.

Global over capacity is the reason there is no growth in capital investments and is why GDP is supported only by the service sector to date. The Fed and all authorities are essentially stuck in a waiting game. They can’t tighten credit until inflation and capacity utilization rates rise or risk recession. Thus they have clearly signaled they have no more monetary tools left and desire the Fiscal pocketbooks of Governments to start borrowing and spending more to accelerate the process. Why not?  With Central Banks access to their printing presses there is no limit to the machinations of special interest programs that can be created for the good of humanity. Political will is the obstacle in divided governments and angry electorates around the world to enact massive fiscal stimulus, but don’t be surprised to see new ways of spending our great grand kids money arise over the next couple of years.