January 13, 2021 Newsletter, Speculator, US Economy, US Jobs No Comments
3

Senate Majority leader Schumer, House majority leader Pelosi and President Biden will officially control the decision making for the next couple of years and send shivers down the backs of most Republican’s who have been fed a steady diet of extreme proposals during the election: packing the Supreme Court, Green New Deal and eliminating the Filibuster among the most shocking. With a razor thin control of the Senate, the true check on one party rule relies on cajoling majority party moderates such as Democrat Senator Joe Manchin. One party rule that sidesteps GOP wishes and ushers in profligate spending and possibly $4 Trillion in new taxes are likely overblown fear factors under Biden’s Blue Wave sweep of the political levers. Democrats will control committees, legislation, but Senator ‘Gridlock’ Manchin and other moderates have already telegraphed they will NOT support extreme change in spending, a Green New Deal, court packing or the nuclear option that terminates the super majority Filibuster rule. The Senate is split 50 – 50 which means party line votes go to the Democrats through VP Harris’ constitutional tie breaking role, but getting to a tie vote must appease conservative leaning Liberals. 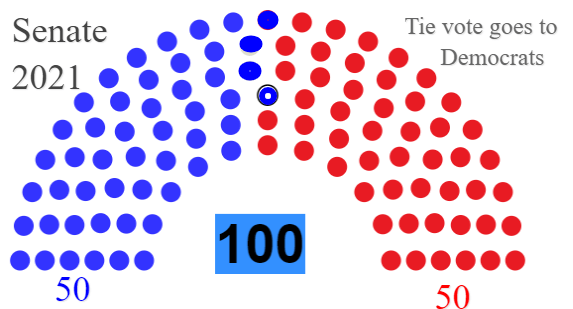 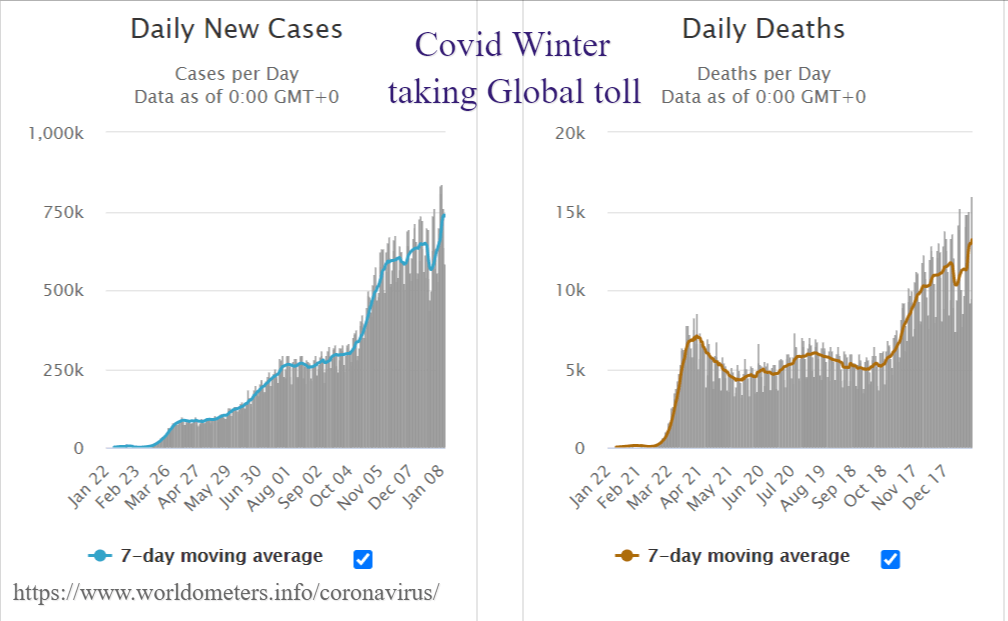 Employment trends are good overall, but payroll data from small business dominated by restaurant and leisure show that job trends are still searching for the nadir of this pandemics abyss. With lockdowns spreading, it will take a few months before small business growth awakens. 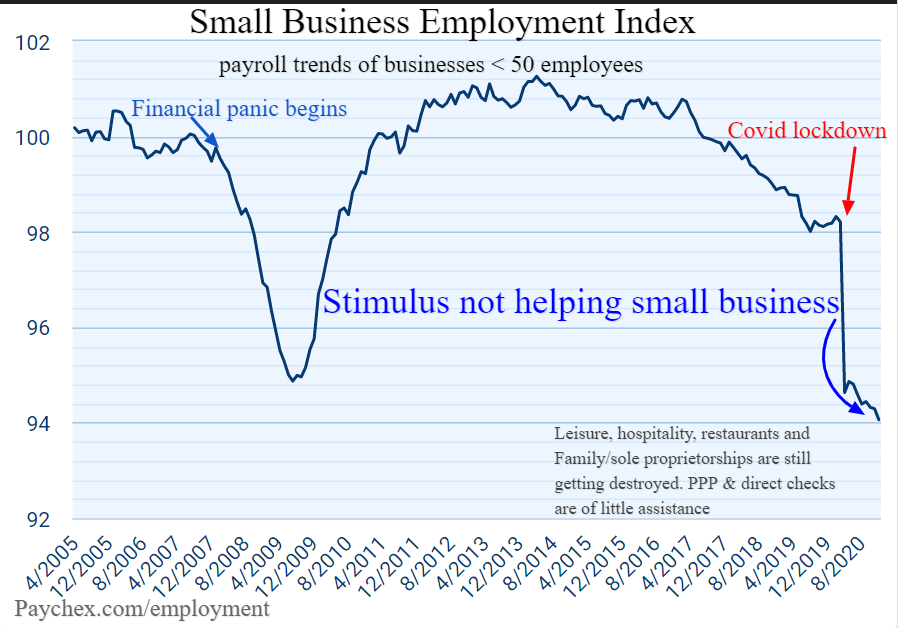 Small business growth and employment will explode higher later in 2021 regardless of Government stimulus as the virus finally succumbs to big pharma. For now the world is bleak enough to garner votes and secure Senator Manchin’s conditional approval of some “emergency” measures. Small business was aligned with Trump and their growing optimism suffered a sharp setback since his defeat. It will rebound with the economy as 2021 progresses with growing concerns about a labor shortage. 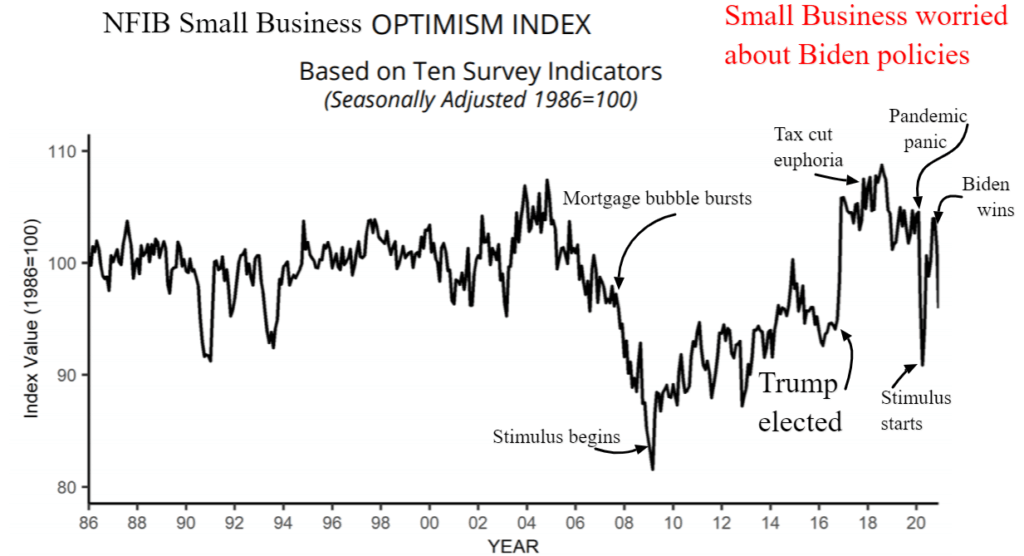 Stimulus is already in the pipeline, effective vaccines are within a few months of securing an end to lockdowns and economists are unanimous that 2021 will witness near record GDP growth. Thus Democrat’s will need to strike quickly to take advantage of the pandemic and get their socioeconomic priorities passed before the world is no longer driven by fear. Increasing the recently passed $600 stimulus checks to $2,000 will be step one. Additional trillions are likely to be proposed accompanied by a wagon load of unrelated pork in coming weeks that will pretend to assuage pocketbook pain of voters while stealthily buying political votes. The US and it allies will have significant tailwinds when the stimulus dust settles and the economy finally opens completely. 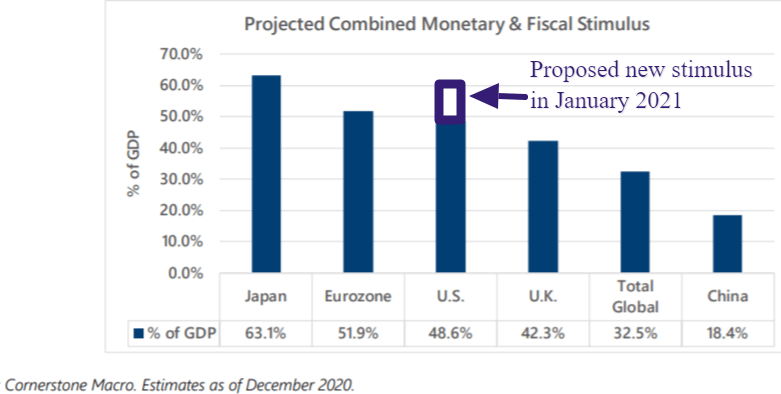 There is no doubt that once Covid is conquered and the economy is fully open for a few quarters, legislative efforts for major tax hikes will begin. Some higher taxes will arrive in 2022, but not to the extent proposed by the most vocal Democrats or President Biden.  Capital Gains for example was lowered to an “effective” maximum rate of 23.8% under Trump. Biden desires an effective rate of 43.8%. A 50-50 Senate may need to lower their sights to garner moderate votes for passage. If we want to read the tea leaves for impactful legislation, we should start with the twitter feed for Senator Manchin.  Expectations among voters on both sides of the isle are as stark as ever. For half the country concerned about radical one party rule, we suspect it will not be as bad as feared. For the other half celebrating the demise of Trump and a non-stop spending party, life will not be as happy as hoped as major action will be restrained by political moderates.