Our theme for 2018 is for an even stronger economy accompanied by slowing stock market growth as compared to 2017. Much of the slow recovery since 2009 has been on the backs of the consumer without the normal contribution of Investment Spending and Exports. The new expansion cycle we entered in 2016 appears to have sparked a return of more normal growth in the Investment and Export components of GDP. Other than temporary inventory declines due to a strong economy, we expect 2017 will hit an 11 year high GDP growth rate and 2018 will witness our first annual growth rate above 2.7% since 2005. 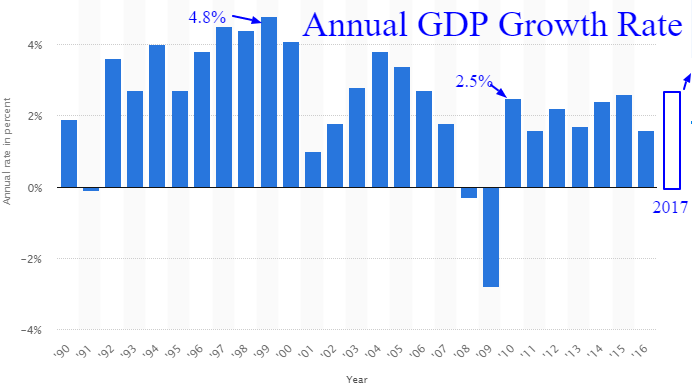 US and European manufacturing are expanding at a pace unseen for 10 to 20 years. New Orders and New Employees Needed are extremely strong. Supplier Delivery Times and Backlogs are extremely weak – which is a strong positive showing the need for future inventory build and expanded transportation activity. ISM New Order expectations are at 13 year highs while demand for adding new employees is near 10 year highs.

Manufacturing strength can be seen in proxies hitting new all time records such as Heavy Duty Truck Orders and Truck Tonnage. This has assisted the Transportation stock index to rocket higher to new all time records – up 14% in the past 2 months, double the gains of the SP or Dow Industrials. 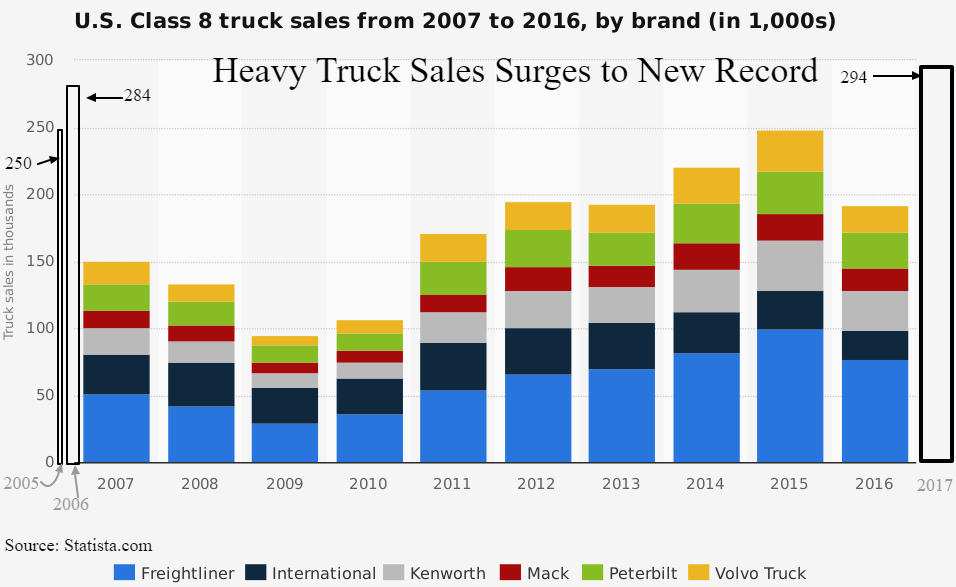 The long dormant Goods Producing sector of the world as measured by Manufacturing is near the most robust expansion rate levels ever recorded in many European countries.  Global manufacturing is the strongest in almost 7 years and even lowly Greece joined the party with job creation, exports and better business activity that hasn’t been seen in over “9 years”. This is not a “long in the tooth” economy. The engines on this economic train are still shaking off the rust of cold storage with plenty of pent up demand potential ahead before credit tightening can slow its progress. What’s amazing about these manufacturing surges around the globe is that they are exploding higher after years of slow but steady growth, unlike the easy comparison rubber-band rallies that occur after deep recessions. 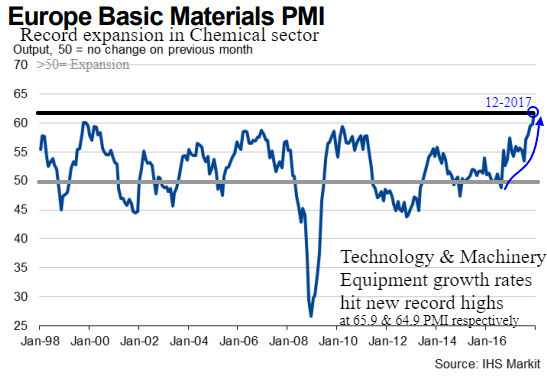 The “great again” global economy that is emerged in 2017 with exceptional tail winds into 2018 may not be as great news for stocks. Our 2018 S&P 500 Index targets are over 2900 in 2018 and over 3000 in 2019. While we expect higher earnings and further stock market gains here and around the world, tax cut premiums and earnings growth may soon become partially priced into stocks compared to 2017’s persistently surprising earnings beats. A shorter term trigger to watch is an initial jolt from superficial tax cut induced wage hikes in early 2018 followed by the growing consensus of European hikes later in the year should slow this unrelenting global surge in stocks. Watch for first signs of elevated wages on February 14th from the BLS. Longer term for 2018 as a whole there remain Walls of Worry (excessive pessimism) that stock Bull Markets love to climb, revolving around (1) fear of over valuation and (2) fear of higher interest rates.

(1) This stock market is overbought short and long term by almost every “popular” measure and is about to set a new endurance record run higher without a 5% correction. In fact it has now been 14 months since there was greater than a 3% price drop. The higher prices run, the more anxious buyers become to buy ever smaller dips. Eventually parabolic price action will generate some  air pockets, but it my take a few 1 to 4% drops before this market is ready for a real correction beyond 5 to 10%. This flies in the face of near record overbought Bullish sentiment surveys by AAII and Investors Intelligence, which may reflect the fact that while too many are expecting higher prices, they are also frozen on the sidelines waiting for that 5 to 10% drop. History warns that at some point there will be a correction that is larger and last longer than anyone expects. In other words don’t be in a hurry to buy the first dip of 5%. 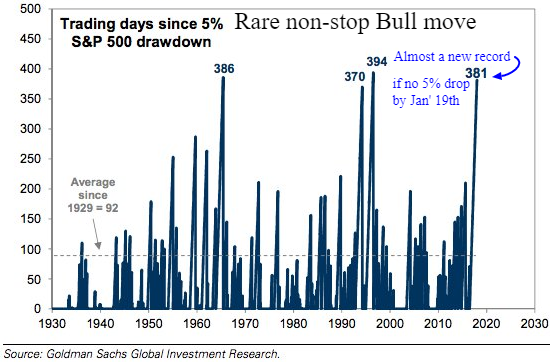 (2) We know that tightening credit ends most economic expansions and Bull markets in stocks. While rising interest rates can coincide with tighter credit and high yields will eventually hurt stocks, these fears may be overblown.  The fact is while interest rates and stocks move up and down essentially in unison. The big surprise is the big move up in stocks the past 6 years while long term yields remained low. Since Trump was elected stocks have been increasingly parabolic while 10 and 30 year interest rates have been flat. The 2.5% Wage inflation in an extremely tight labor market continues to defy economist forecasts using the Phillips Curve (2.5% is actually a normal rate). Short term we expect a surprise one time jump in wages due to Trump’s tax cuts. Hundreds of thousands of workers in over 90 companies “so far” have announced bonuses and permanent wages hikes along with extra retirement contributions which should engender an accelerated boost to labor inflation by the end of the 1st quarter and send a scare to investors. Coastal areas show signs of faster earnings growth.

Unlike long rates, the short term Treasury rates (2 Year), boosted by the Central Bank controlled Fed Funds rate hikes, have risen more sharply the past 4 months in perfect sync with an accelerating stock market. This Federal Reserve Bank urgency to hike rates is not for fear of inflation or an overheating economy. It’s a desperate effort to regain anti-recession tools to lower rates should their be a hint of recession. The rising Fed Funds Rate is also part of the unspecified desire to reduce a portion of the $3.5 Trillion in excess reserves they are holding. These reserve draining efforts may increase the stock market volatility and even put a cap on the Bull market eventually, but there are no signs yet of a top. For now, rates and stock prices move in harmony. We suspect that once 1st quarter earnings reports climax in February, that future stock market gains will become more labored to match very high expectations.

In the later stages of an expansion we expect to see Emerging Markets and commodity prices surging higher as wealthy Western countries strain global production capacity. The Emerging Market led by Brazil began climbing out of their deep recession in 2016 as evidenced by their stock market appreciation of over 136% from 2016 low, easily surpassing Western market Indices. Commodity prices (DBC) always mirror activity in Brazil and while the DBC lagged business optimism this past year, there are renewed signs of commodity prices heating up. Once food prices join the base metals industrial rally, we should see commodities as a whole accelerate upwards. DBC should benefit.

Europe (VGK) may offer modestly more upside potential than the US (SPY/QQQ/IWM) – an already popular trade – but the more untapped stock market potential resides with Emerging countries like Brazil (EWZ) and Russia (RSX) or Emerging markets in general (EEM), despite their political uncertainty.

The US and Global economy should have an even broader acceleration in 2018. Stock prices will continue with strong gains, but a deceleration from 2017. While US and European stocks will continue higher with strong tech index leadership, we expect better performance from industrial and material sectors as well as commodity heavy Emerging markets. Short term Bullish sentiment is high and concern over wages may begin to escalate in mid- February when January labor costs arrive and corporate earnings near peak reporting that may allow a dip for traders to rebuy. Long term remains positive.