This week surprised most forecasters when core consumer price (CPI) and producer price inflation rates returned to 40-year peak levels. Instead of confirming several months of falling inflation rates and an end to Fed rate hikes, we now await a new downtrend in the CPI to start. Investors may have hoped a lower inflation rate this week would mean the poorly named Inflation Reduction Act” was already working before it began and would herald the coming of the Dovish Fed pivot. Instead, the market saw Fed Chair Powell’s shadow and burrowed deeper into its hole. On top of this Bearish inflation news that sent the SP 500 benchmark down 5% in two days, Quantitative Tightening (QT) doubled this month. Our Fed will now sell $30 billion in MBS (mortgages) and $60 billion in Treasuries monthly, draining bank reserves from the system and tightening credit. Many money managers and CEO’s are clamoring that the economy is “flat on its back” and urge the Fed to stop and wait to see how well the current rate hikes work. A crystal ball would be nice, but such advice will rightly be ignored by Central Bankers with over 8% headline inflation when it could take years to know what effect a Fed rate hike will have. The rate hikes of 2004 to 2006 were far greater than the hikes this year and yet it was 4 years later before inflation and consumption finally slowed and triggered the mortgage debacle of 2008. The 3 years of rate hikes beginning in 2016 did not reveal any impediment to consumption or inflation rates for 4 years. With inflation rates more than double these comparisons for four months, there is no way the Fed is going to indicate a pause until inflation falls precipitously. As can be seen by the personal consumption expenditure line (PCE), spending jumped more than a trillion dollars above normal due to Government handouts and monetary stimulus the past 2 years. Quite simply, consumption needs to fall, the economy needs to slow further, and record job openings must switch to “modest” job losses before the inflation tiger can be tamed.

The good news is that we see the September inflation report as more of an anomaly on the path toward a slowly falling inflation rate. While core Producer Price inflation (PPI) remains at peak levels just under 9%, the month-over-month numbers are now at one-year lows. As the high monthly numbers of the past 8 months or so fall off, the year over year data will become easier for the Fed to achieve its inflation target. With over half of our extreme inflation supply chain (labor) oriented, it’s a good sign that both manufacturing and service sector inflation at the producer level are clearly showing a cooldown in pricing pressures. A few month over month contractions in PPI with <50 PMI Price Index level may be required for the Fed to shift to a more Dovish monetary policy. 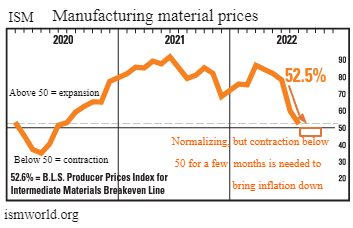 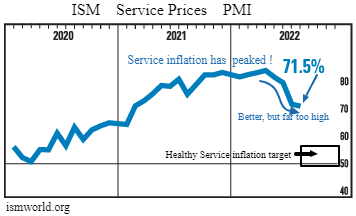 However, the throngs shouting that our economy has tanked, and housing has collapsed seem unaware that industrial production and home construction are extremely high and not yet contracting. Home prices are still soaring by 18% and the demand for workers remains historic with record inflation. It seems a bit premature to say the Fed should declare victory and stop pumping the brakes, especially when this Administration just passed another $1 to $2 trillion in new get out their vote mid-term stimulus bills. This consumer is still far too strong to assume inflation will fall significantly in the near term. Housing and owner equivalent rent comprise over 40% of the CPI. This key inflation measure is considered quite sticky, operating with a lag, and it shows no hint of rolling over. We can’t wait a year to see if inflation stays high without risking an entrenched wage spiral and long-term damage to our small business innovators. 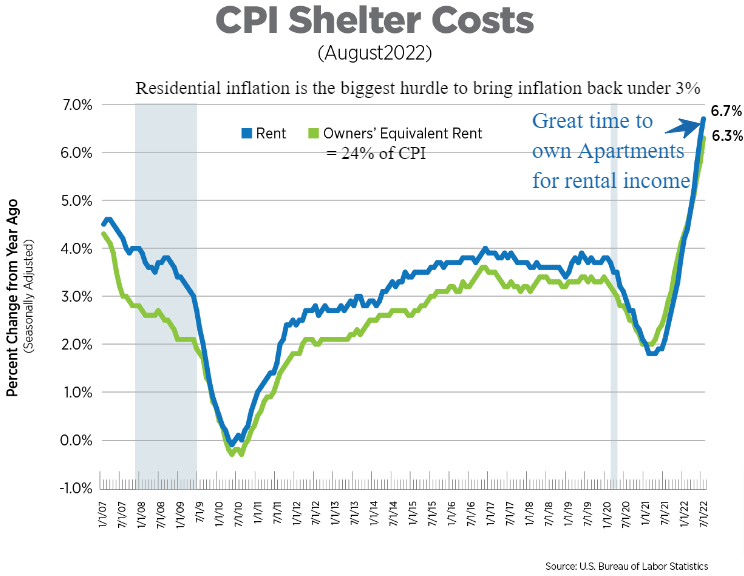 The employment cost shock and strength of the labor market are already causing a dangerous deterioration among small businesses with weak reserves that are unable to compete with major corporations for scare labor resources. Unfortunately, we need to see Gross Domestic Income (GDI) and Job Openings falter, commensurate with falling inflation rates, before the Fed can terminate its credit tightening effort. When the September CPI report comes out in October, we believe it will show a clear drop in core CPI and the Fed’s PCE metric. With labor being such an important part of inflationary supply chains, then by definition, labor will have to loosen and unemployment will need to rise at least modestly (>5) before consumption pricing can normalize. That is when we can anticipate a new downtrend in official inflation data and expect equity markets to rebound in the short to medium term.

With stubbornly strong consumer spending, labor shortages and continued upside surprises in corporate earnings to date, the extreme investor pessimism should afford an undervalued buying opportunity by October 13th when the next CPI report is released. On the bigger picture, we continue to see downside risk into Q1 2023 before an all-clear Buy for the next Bull market can begin. Our current 60% cash position may be partially invested in the 2nd half of September or 1st half of October near the June stock market price lows or lower.