Hospitably has been quite inhospitable to investors in March. Unemployment claims are about 10 times greater in recent weeks than in the depths of the last Recession. National unemployment is nearly 14% and appears destined to breach 20%. RavnAir Group, the largest regional carrier in Alaska, filed for bankruptcy this past week.  Delta, American, Spirit, Southwest, United and JetBlue are among the airlines that confirmed they seek bailouts, without which they would quickly crash into bankruptcy court. Restaurants were employing 15.6 Million until COVID-19 shutdowns and social distancing began in March and are mostly shutdown. Almost 80% of hotel rooms are empty with over 4 Million workers at risk of losing jobs. Of the nearly 17 Million jobless claims over the past 3 weeks, lower wage employees of Bars, restaurants and leisure comprise 60% of all jobs losses in the US due to the virus. The Bureau of Labor Statistics chart below from last week (below) understates the job losses, but highlights the sectors of the economy bleeding the most. As we hinted above, leisure and hospitality have fallen most quickly into the Intensive care Unit of the hospitals Government emergency spending wing. Unfortunately, many hospitals and doctors offices have also shut down with massive furloughs as mostly just Coronavirus patients are deemed essential. It may come as no surprise that the Government is hiring, as somebody has to sign those staying alive checks and knock on doors for the 2020 Census. 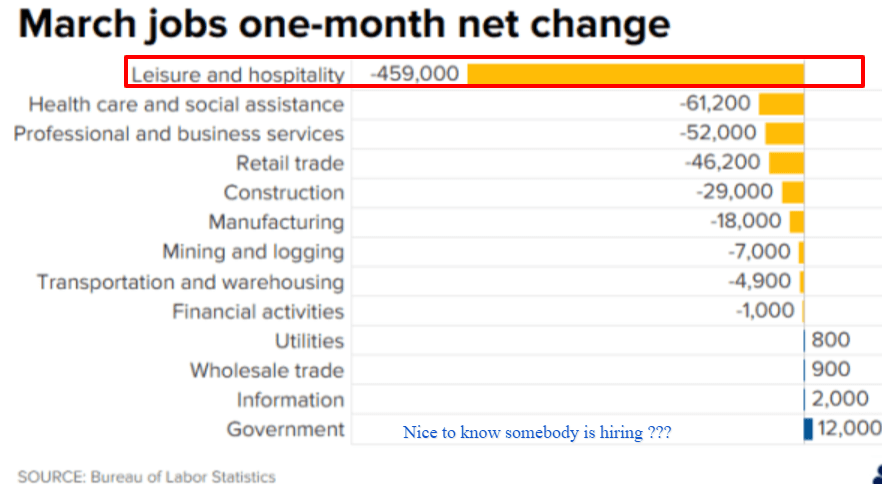 Everyone knows there will be a massive Government mandated Recession in the first half of 2020, followed by a statistically sharp rebound in the 2nd half. The big single digit GDP contraction forecast for the 1st quarter (Q1) of 2020 will be dwarfed by an expected 25 to 40% contraction in Q2. Goldman Sachs forecasts a 25% drop, PIMCO is currently expecting 30% lower and JP Morgan is now estimating a whopping 40% economic collapse in Q2. While it’s comforting that all forecasters expect double digit recoveries as high as 20 to 25% in Q3 and Q4 as the economy opens up in phases, those outcomes would still represent a full year contraction of 10 to 15%. For context, during the worst years of the 1930’s Great Depression, GDP contracted 12 to 22% several years in a row (although never 40% down in one quarter). Thankfully we have safety nets today, however artificial they may be. In Dollar terms, the US economy (GDP) pre-COVID was on trend to grow from $19.22 Trillion to $19.6 Trillion in 2020. The current top forecasting firms estimate a year end number, after a massive 2nd half rebound, will be at least $2 to $3 Trillion lower than previous trend-line estimates. These forecasts include the $2.3 Trillion the Government has already earmarked to replace a modest portion of accruing losses this quarter. Government spending packages may need to flood the emergency pipeline with an additional $2 to $3 Trillion just to keep the economy afloat and bring the lower half of US workers back above longer term subsistence levels. These forecasts are not meant to be precise, given the massive uncertainties in estimates regarding the COVID battle and the unknown behavioral response of Governments (Federal and State) and individuals. The point is, even with an enormous 2nd half of 2020 rebound, it will still be a very difficult year without widely available and effective COVID treatments that are required before there is a full economic recovery. Until then, uncertainty and continued investment market volatility will remain above normal, impeding the markets path back to record highs.

It takes quite a while to summarize the negatives. On a more positive note, we still feel that the one month 36% crash in the stock market ending in March represents the worst of times for investor portfolios as the Federal Fiscal and Monetary leaders will not allow medium to large businesses to fail and will keep escalating handouts to the small firms and lower income earners until they are employed. Normal market forces were already slowing the economy down in 2019, but this exogenous pandemic caused an abnormal Government reaction to dim the economic lights. While US authorities can’t flip the light-switch on until the Corona cure is found, they can raise the dimmer setting  for most businesses once virus related fatalities fall significantly over the next 6 weeks as forecast while waiting on the cure. Stocks have already responded forcefully to the unlimited Quantitative easing (QE)  and virtually unlimited Fiscal spending actions that have both occurred in record time. This biologic crash resulted in the quickest >30% stock market crash in history from record highs and the quickest 50% retracement from those deep Bear market lows.  This 50% level and the 61.8% in the SP 2900’s represent common professional money manger resistance level targets to watch for, inspired by Robert Prechter’s  institutionalization of RN Elliott’s “Elliott Wave Theory” and its use of Fibonacci math.  Until a COVID treatment prevents the need for hospitalizations we would expect the SP 2800 to 3000 range to provide major resistance to rallies. However, as long as we remain in the Buy the Rumor mode awaiting the downside of the virus curve to trigger a first step in opening back up the economy, then the downside risk is limited to a level well above the March lows.

This 50% of the correction bounce back to SP 2800 this past week has already created excessive trader optimism, exemplified by strong Call option buying ratios. The current peak or a few percent higher in April stock market indexes should then lead to a cycle low in May for buying that we often expect 6 to 8 weeks after a major correction low.

As previously stated, the current lows should hold due to the monetary and fiscal kitchen sink already being utilized to stem the carnage. Given the fiscal and monetary leverage building in the background, we suspect record stock market highs will ensue within a few quarters of  widely available COVID treatments and vaccines being provided. Any decisive new low in stock indices in 2020 would be a concern given the “all in” backstops already in place. What could threaten this ray of sunshine in the eye of the storm? (1) If SP 500 Index earnings fall beyond the already devastating and partially discounted 45 to 55% lower estimates (2) If Oil falls to single digits  (3) A surprising resurgence creating record COVID hospitalizations around Europe and the US. These and other surprises could test the markets resolve to hold the line if a new panic wave begins, but given the current Corona calculus we would favor a wide trading range inside of which we expect and April top and an investable May low. The bad news on the economy will continue to flood the airwaves and maintain the “wall of worry”, but the primary indicator to watch continues to be mostly COVID-19 related for now.