The Inverted Yield Curve with short term rates above long rates has been one of the most anticipated over hyped harbingers of doom and gloom in history. For over a year Bearish forecasters sounded the alarm bells of a coming contraction as the Yield inversion approached, even though histrionically this is one of the best periods for stocks and the economy. Then prognosticators incessantly advertised that any and every maturity spread inversion this year was a guarantee of a recession clock countdown. When improving economies coincide with a couple years of a narrowing yield curves and the economy can remain strong for a year or two after the inversion, then the correlation is specious. It’s inevitable that economic expansions eventually lead to a recession and as economic momentum wanes, long rates fall faster than the Fed influenced short term rates and this triggers a bond spread inversion. An inversion doesn’t cause the economy to contract, but it can be a symptom as the economy slows. The fact is, the US economy slowed over the past year and the Fed has been behind the curve, causing the inversion by artificially elevating short term yields. A recession within two years isn’t inevitable or useful and while yield curve inversions are interesting to analyse, there are many other signs that are more predictive than this alleged indicator. Below we will take another angle analyzing our bifurcated economy of consumers and producers for a better diagnosis.

While the summer of escalating trade wars, gloomy bond yield implications and weak industrial data has been our wall of worry for stocks to climb, recent hard data points to a small rebound in US production trends and more gains in the more important consumer segment of the economy, both in the US and China. The global export markets and industrial sectors may be looking dire, but US and Chinese consumers are still ringing the register over and over. Politicians can claim that China is hurting, but recent reports from behemoth consumer stocks Alibaba and JD.Com support the argument that Chinese consumers still have ample Yuan in their wallets to increase spending. Alibaba is the Chinese version of EBay and has just reported year over year revenue growth of 40% in its core business. 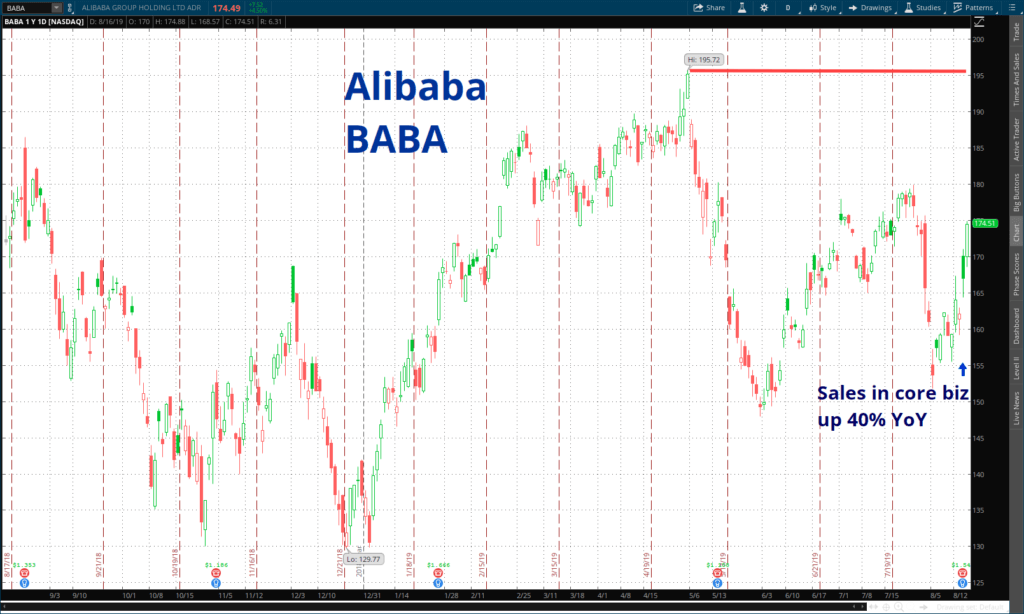 JD.Com is the Chinese alternative to Amazon and is supported by major investors such as Walmart and Google. The quarter over quarter growth of 21% in sales reported this week is another example of an optimistic Chinese consumer. This is a much growth faster pace than our amazing Amazon’s single digit expansion this past year. Before believing the hype of our US Bull breaking their China shop, we should understand that Chinese consumers are at record levels of optimism with robust expansion in spending. If Trump gets what we assume is a low odds trade deal, it will not be signed due to economic pain in China at this time. 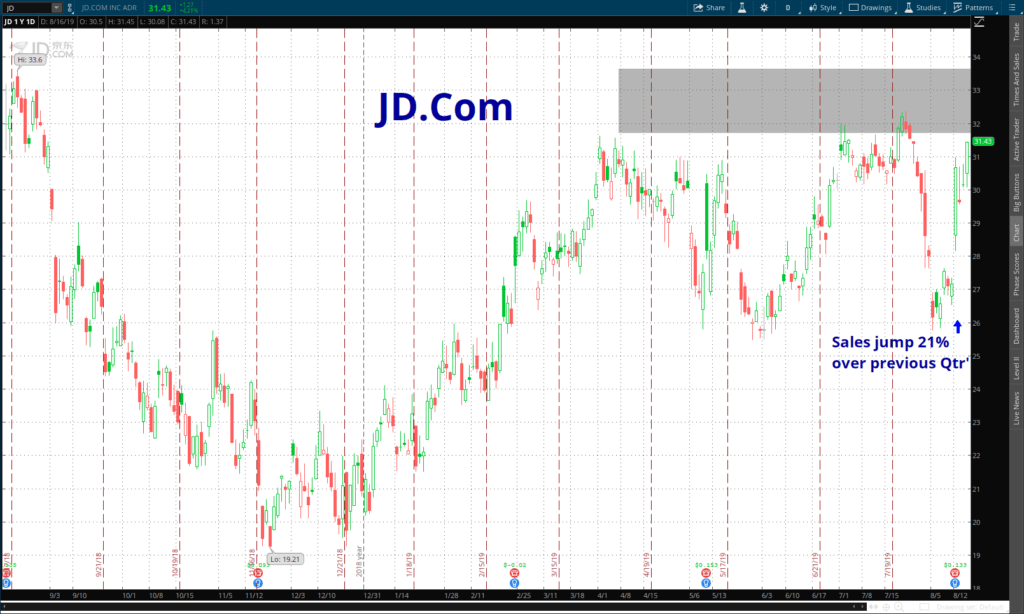 There are plenty of signs that the US consumer is as ebullient as the Chinese in spite of the rising cost of tariffs. Consumer staples in the US are one of the top performing stock market sectors with strong growth in Walmart, Procter, Coke and others. Coke is hitting record highs today, Walmart and Proctor are within an easy one day run for the records currently and the SP Index of of Consumer Staples (XLP) measuring the 33 largest consumer companies in the country is also very close to a new milestone. 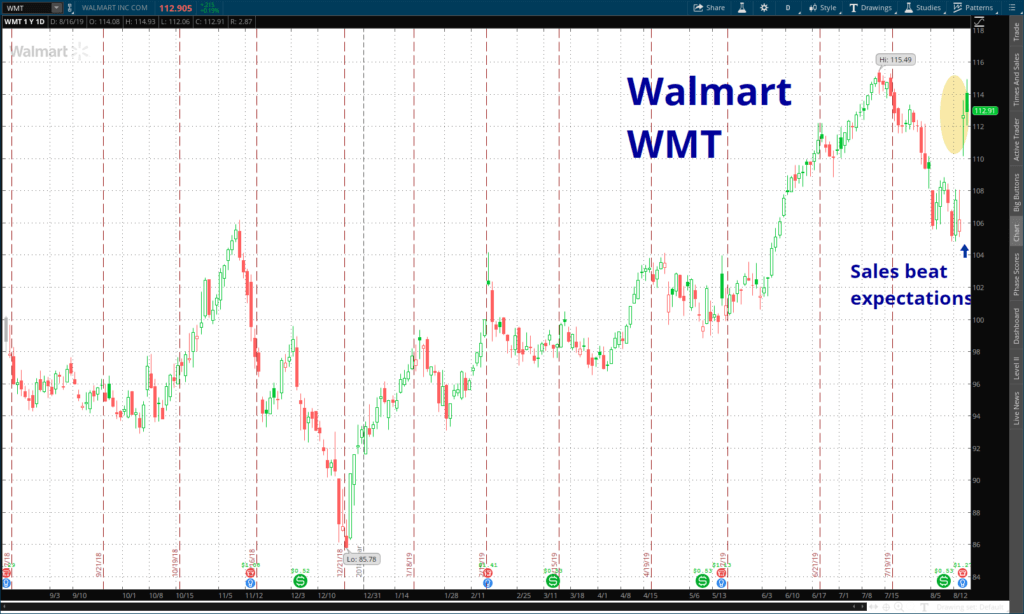 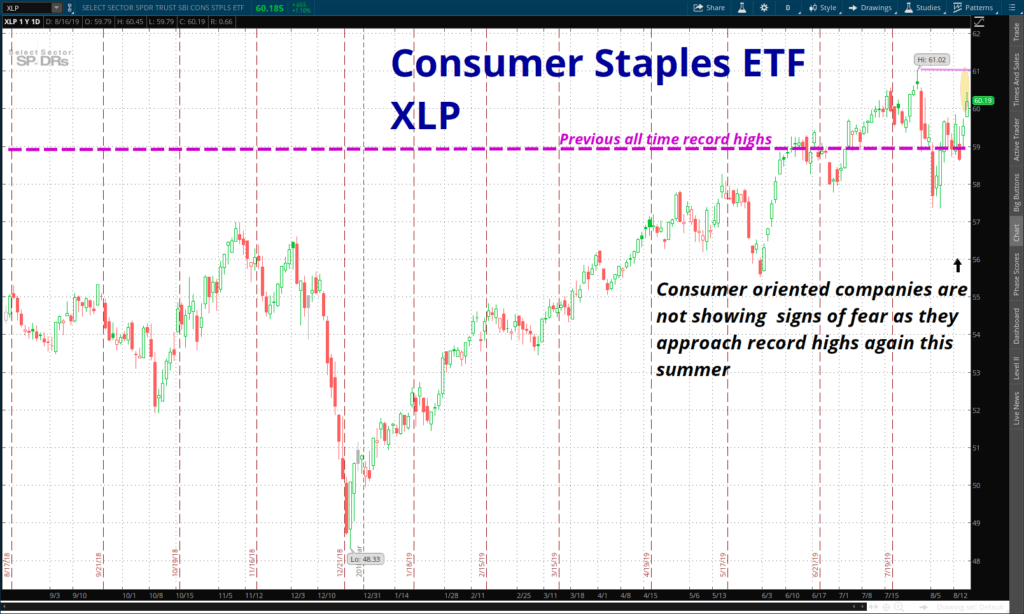 The upside revenue surprises of so many monster consumer staple companies around the world is impressive and the broader macro data reinforces this message. US Retail Sales typically roll over to flat or declining sales data long before a GDP contraction. The 20% stock market correction and modest economic slowing led to a minor sales pause in early 2019, but this has proven to be a false alarm as consumers reaccelerated their spending habits sharply in recent months.

Digging deeper we see same store sales continue to record amazing 4 to 5% growth rates, which is remarkable after a 10 year expansion. While alarm bells would be deafening should this fall below zero, the audible ringing sound will be faintly heard if we see same store sales move down to just 2 to 3% growth rates. However, the zero to 2% sales growth for most of 2015 and 2016 failed to trigger a contracting GDP and today the labor conditions are far better with persistently significant labor shortages.

One final look at consumer health proxies can be viewed through sentiment surveys. While a more pessimistic perspective can be seen in the July Michigan survey, the current read above 90 is still in the upper end of the past 18 year range. We would like to see this number stay above the upper 80’s and as long as stocks and the economy can stay near current levels, the consumer may stay positive enough to sustain spending, albeit at lower growth rates than last year. 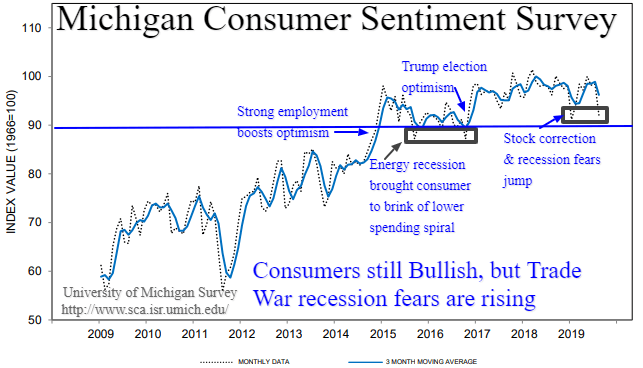 Perhaps more surprising to us is the lack of pessimism in the small business community. The manufacturing sector has clearly slowed from last year, but most business only began to work off excess backlogs a few months ago and have stabilized at profitable, but slower production levels. The July data reported this week actually reflected a sharp upturn in positive expectations as manufacturers saw increasing new orders and a need to elevate production. The biggest concern in the polling data remains the ability to find labor. It’s hard to be too skeptical of business conditions when the demand for labor is stuck at record levels relative to supply.

The two most recent Federal District reports from New York and Philadelphia support the uptick in small business sentiment. In 2016, Orders had contracted  for a long time without much of a backlog buffer leading to a moribund 2016 economy. The minor Orders contraction in May – June 2019 did not last long enough to cause shipments to shrink, thus the July upturn seen here provides some near term buffer to third quarter shipping volumes. 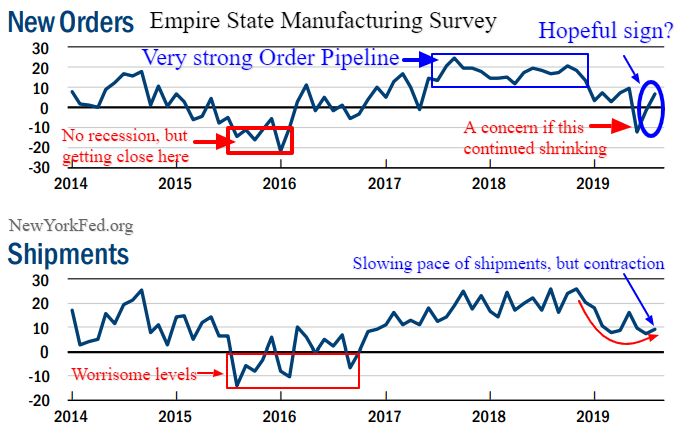 The Philly Fed district is reporting even strong numbers than the New York Fed with activity, new orders and inventory expansion moving back to the upper end. Reports of long delays in the supply chain imply a level of demand greater than available supply, a strong signal of underlying activity. 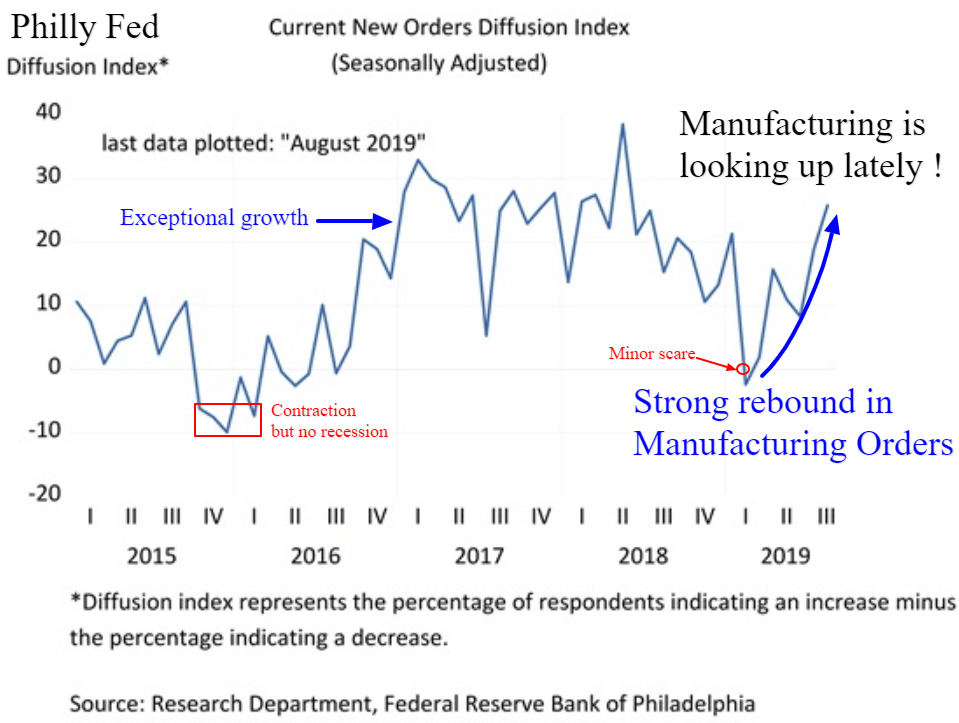 The strong consumer and service sector along with optimistic, but a slowly expanding industrial sector reduces the odds of a recession. Our conclusion is we are in an unusual business cycle influenced by deflationary aging demographics and supported by excess liquidity, cheap credit and a secular labor shortage. This condition makes it difficult to achieve an overheating economy and equally challenging to experience high unemployment as boomers keep retiring too rapidly for business to acquire workers. Surplus labor capacity has always preceded or coincided with economic contractions. Exogenous events and geopolitics can exert unpredictable recessionary pressures on the our economy, but in an age of quantitative easing and employment deficits it may be that politics is our biggest risk.