US Treasury debt instruments are deemed the safest in the world with the 10 Year Treasury Note being the most popular. While safety, foreign bond rate competition and inflation expectations are among the most important factors affecting the yields of US Treasuries, Quantitative Easing (QE) is also an influence in this unique era of printing money out of thin air. Our quasi Government Central Bank, the 106 year old Federal Reserve, still holds $3 Trillion of a debt rescue scheme for its Government, even after uncreating $600 Billion of assets since 2018. Helping support the Dollar and strong demand for US Treasuries (lower yields) has been the continued QE expansion in Europe while US reserves shrink. The Eurozone has thus far failed, but wants to emulate the US and cure its addiction to printing money and suppressing interest rates to zero in order to stimulate inflationary economic growth. With manufacturing  contracting in Europe we expect to hear the clamor for a shift from monetary to fiscal stimulus. The trend of lower US Treasury yields should continue and would signal a further erosion in US economic fundamentals and inflation expectations. Falling interest rates are a positive tailwind much further down the road, but near term accelerating year over year contractions in yield are a headwind that should keep investors wary until the bond rates reverse.

The strong Dollar since April 2018 has depressed inflation and should have been a clue for the Fed that the sudden US inflation of the supply chain and materials in the summer of 2018 was an aberration of tariff preorders. The Fed raised short term rates aggressively in 2018 and had planned on a similar series of hikes in 2019 to combat their erroneous forecast of rising inflation. The 20 percent collapse in the stock market in the fourth quarter and a sluggish realization that global growth was slowing rapidly, triggered Fed Chair Powell to pivot 90 degrees, declaring no more rate hikes were on the horizon. Even the escalator ride back to new record stock market highs by April 2019 has not deterred the Fed from its recent accommodative policy as they distance themselves from reliance upon the specious Phillips Curve. Powell would like to see China Trade deal clarity and a return of  global growth with signs of commodity inflation before transforming back to his curmudgeonly rate hike persona of 2018.

The Fed’s tardiness in realizing the abating price inflation measures inadvertently accelerated the trend toward an inverted yield curve where short term rates exceed longer term maturities. While the historically contractionary forecast accompanying an inverted yield curve is overly hyped as a prescient indicator, the Fed should have been more sensitive to this perception and the falling bond yields last November. In December, Powell made one mistake by raising the Fed Funds rate to 2.5 percent despite the sharp drop in long term market rates already underway. Prior to the modest inversion using the Fed controlled 3 month T-Bill relative to the 10 Year, the Fed made another mistake and should have actually cut rates back to 2.25 percent or lower to prevent this inflection point. Not that it should be surprising, but the Fed is consistently behind the curve in its monetary policy. Unfortunately, monetary stimulus is the only pro growth tool available given the impasse on trade and the long term paralysis in Government and Fiscal policy levers such as infrastructure spending.

Falling interest rates often indicate reduced inflationary and economic expectations. The 10 Year Treasury yield peaked at 3.2 percent last October and has now fallen to a 18 month low of just 2.3 percent today. This is a sign that US growth is slowing and to expect durable goods orders to begin contracting in year over year data. While a trade deal with China could turn the tide sharply higher, don’t hold your breath waiting for better waves as the signs of a protracted trade war continue to grow this month.

Falling Bond yields are a headwind short term even though it provides a tailwind longer term in derisking credit quality and borrowing intentions. One of the headwinds can be illustrated by Copper. Here we display the identical chart from last month with updated prices showing the continued fallout from the trade impasse with China and lowered demand expectations for Copper. Hedge Funds are nearing oversold levels now, but a further move into the 240’s to 250’s is potential before managed money funds reduce there near record net short positions. Should the US Dollar move back above 98, Copper will likely fall back to 2 year lows under 255. A short term move in the Dollar below 96.75 on trade hopes will allow for a nice short term bounce in Copper. Such a rebound would be a Selling opportunity until signs of trade negotiations with China are back on the calendar

Exhibit 2 of the falling yield headwinds forecast are falling Oil prices. We have recently talked about the potential for higher energy prices, entirely dependent upon both a successful trade deal with China and actual military strikes by the US upon Iran and its proxies in the Middle East. A US bombing campaign against Iran’s proxies could send Oil up to the mid $60’s in a heartbeat, while an actual strike against Iran directly should cause a rebound well into the $70’s initially. However, without an outbreak of attacks by either side, the focus is on the global slowing and stagnant consumption exacerbated by growing pessimism that the US and China can avoid  further retaliatory measures. This trade pessimism and lack of actual Mideast fighting recently is compounded by the strong deflationary rise of the Dollar and counter seasonal rise in Oil and gasoline inventories. Like 2018, the inventory building season has moved beyond its normal late April peak and may not start falling again until June or July. Thus, despite the current downtrend in Oil on expectations of ongoing supply and demand fundamentals, this is a market easily influenced by geopolitical events beyond most crystal balls. US military strikes in the in the Middle East will send Oil up $5 to $20 a barrel depending upon the epicenter, while a lack of hostility and an impasse on trade could send Oil to the $53 to 56 area this summer. The given in this soup of potential exogenous events is that US oil production will continue growing, averaging well over 12 million barrels a day (mbd) in 2019 and over 13 mbd in 2020 unless Oil falls under $40. 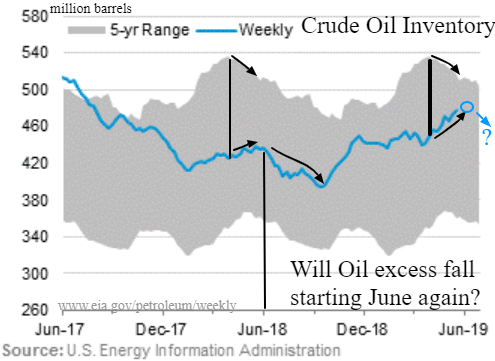 The economic headwind in coming months from falling interest rates will reduce earnings expectations and risk lower stock prices the longer the US and China battle lines harden. In the first quarter (Q1) we forecasted record highs in stock indices by summer and throughout Q2 we have warned of a 7 to 10 percent correction phase to ensue. Our earlier charts have illustrated the potential for a top in the SP 500 stock index in the 2960’s with risk down to the 2600’s without a trade deal in Q2 2019. For now, the odds of further stock market erosion have increased, although support over the next few weeks should arrive near 2700 basis the June SP 500 Index. One more leg down below 2800 on the SP with new 2019 highs in volatility should bring sentiment to extreme levels providing a temporary floor for stocks.

Much of the short to medium term price action in stocks and all commodities rely upon unknowable geopolitical developments this year. We all know that both the US and China want and need a deal, but such clarity is clouded by the prerequisite of saving political face, requiring a deal that can be sold as win for both countries. Trump can’t allow a weaker economy or major drop in the stock market to occur and linger into 2020, so he has to hasten furthering the trade battle to bring this conflict to a boil before the election season or find a radically new strategy. Our thought would be for Trump to split the trade battle into two pieces, pushing quickly for China to Buy more US products and open its markets to competition, while continuing the battle for the all important and far higher hurdle of intellectual property and enforcement. Watching Treasury yield trends will be one indicator to track for clues to underlying trends and expectations. Currently the long term benefits of lower interest rates and cheaper credit are overwhelmed by the near term headwinds of a slower economy and earnings expectations.

The U.S. and Israel Are Itching for a Fight

The U.S. and Israel Are Itching for a Fight
Ready to start creating financial success? START YOUR FREE TRIAL