The current prime age (25-54 years old) unemployment level hovers around multi-decade lows of 3% – essentially full employment – while the prime age labor force participation rate is far from its peak – implying less than full employment. Since the female workforce rose to maximum participation rates in the 1990’s on the gender equality wave, we have never seen total prime age unemployment fall beneath 2.9%, which means there are extremely few able or willing to seize the record number of job openings today. The 2.6 Million prime age workers needed to match the record saturation levels of the 1990’s is still far from the 7.1 Million unfilled job openings today. To attain a record prime worker participation rate over 84% would be a Sisyphean feat as it would require virtually zero unemployment, which structural and frictional impediments prevent.

Job Polarization: Why do these post college to pre-retirement age people remain on the sidelines? Studies have shown that only a small fraction of this modern era slack in labor participation abstains from working due to drugs, mental health or obesity. We have posited previously that the high tech gig economy of Uber and Air B&B have led to many college grads exploring freelance contracting after failing to find a job commensurate with their education. More broadly, studies hint that these prime age workers are both over qualified and under qualified for the vocational openings that remain. Personally we see this as owners in the manufacturing space. The low skilled jobs are our the most difficult hire as college grads that are most trainable would rather sit idle or drive cars temporarily rather than accept a position beneath their pay grade. The shrinking pool of non college educated workers to fill our entry jobs lack the discipline or ability to be trained. While lower skilled workers are historically the least employable, in recent years its the college grads that increasingly struggle to match their skill level with jobs available. Most students who spend $70,000 to $150,000 for 4 year Public or Private school college degrees will not be settling for $13 to $20 an hour paychecks in high demand when they need middle income paychecks of $30 to $50/hour. These middle class jobs are the most easily automated and declining in demand relative to lower skill or advanced skill vocations. This has led to increasing job polarization of college graduates, under qualified for high skilled upper income jobs and over qualified for lower paying entry level work. More Bachelor degrees and psychology majors are not the answer. The less educated need Trade Schools and the growing college segment needs more advanced degrees. 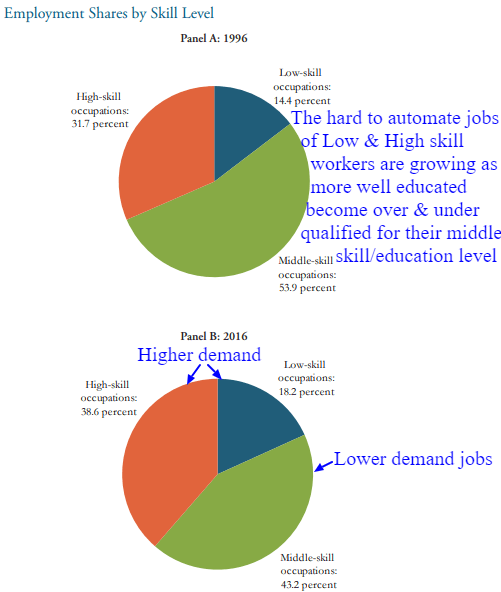 The President can trumpet the success of accelerating the demand for made in America jobs, with more employers desiring to increase their US presence. However, manufacturing imports from abroad continue strong and the skill level polarization continues to push low income labor across the border to Mexico.

Job polarization helps explain why college educated people are choosing to be self employed under the radar with periodic freelance work rather than work in the burgeoning low pay Amazon fulfillment centers or machine assembly departments. The extreme worker shortage and polarized skills mismatch encourages offshoring to satisfy the vacancy of labor in our paltry lower skilled labor pool. Markets such as Mexico and Brazil contain decades of abundant low skilled labor supply eager for our work, while the US market experiences near record low unemployment. Other than offshoring, a combination of solutions is needed to automate low skilled jobs: import workers from abroad, more targeted educational curriculum in sync with private sector demand and trade school training of poorly educated prime age workers. The tight labor market trend as Baby Boomers retire will remain for a long time and acts as a deflationary governor on inflation and the growth rate of this economy. Monumental efforts to reshore companies to the US , fiscal stimulus and incentives can elevate our baseline economic growth rates, but sustained GDP rates above 3 to 4% will require a more rapid expansion of the labor pool matching the skill levels our new economy demands.