Like a balloon under water, the stock market zoomed higher on unmanned algorithmic trading by 20% this past week on a trifecta of Monetary, Fiscal and Executive actions indicating our economy will not be allowed to fail. The first salvo was fired by the Federal  Reserve Bank on March 22nd promising unlimited quantitative easing (QE infinity) to lend credit wherever it’s needed. The fiscal fire began burning the next day on the certainty of a massive $2.2 Trillion spending bill (expandable to >$6 Trillion) to rescue the entire economy while it remains in a mandated stall. The final and perhaps deceptively the most important rescue plan occurred March 24th when the President hammered a nail in the Bear market coffin, stating he would begin opening the economy back up in April. Finally investors could focus on an end date, even if fraught with risk. For the past month investors and businesses had been staring into an abyss with no sight of a bottom or light of optimism for an end to the COVID-19 pandemic. Even if the Corona contagion were still rising exponentially in mid-April, causing Trump to prolong extreme shelter in place directives, the sentiment has now shifted to expect an economic restart that will no longer be delayed indefinitely. Investors had already sold the stock market down to valuations reflecting a deep Recession and an evolving concern that a potential Depression could manifest. Consensus continues to expect a very deep economic (GDP) contraction beyond levels seen in the 1930’s Depression during this March through June time-frame. However, stocks have rebounded this week on the perspective that the economy will be backstopped and move toward a recovery in the summer and sharply higher during the 2nd half of the year. Trump may have mandated a Bear market with his lock-down of the US economy, but now he’s putting the country on notice that it’s time for the Bear market to end and the economy to open back up for business.  With a GDP collapsing over 10% currently and unemployment rising faster than any time in history, Trump is worried about a desert of profits and popularity that may be difficult to recoup.

Monthly Purchasing Manager Indices (PMI) of the Manufacturing and Service Sectors measure the outlook for the economy. After several years of healthy growth indications, March witnessed the sharpest plunge in business sentiment ever recorded in these surveys in the US and around the world. What is particularity troubling about the current lightening contraction in the global economy is the forced shutdown of the Service sector. While manufacturing has always been deeply cyclical, the ever dominant consumer and technology led service sector has been amazingly resilient to Recession until COVID-19 arrived. 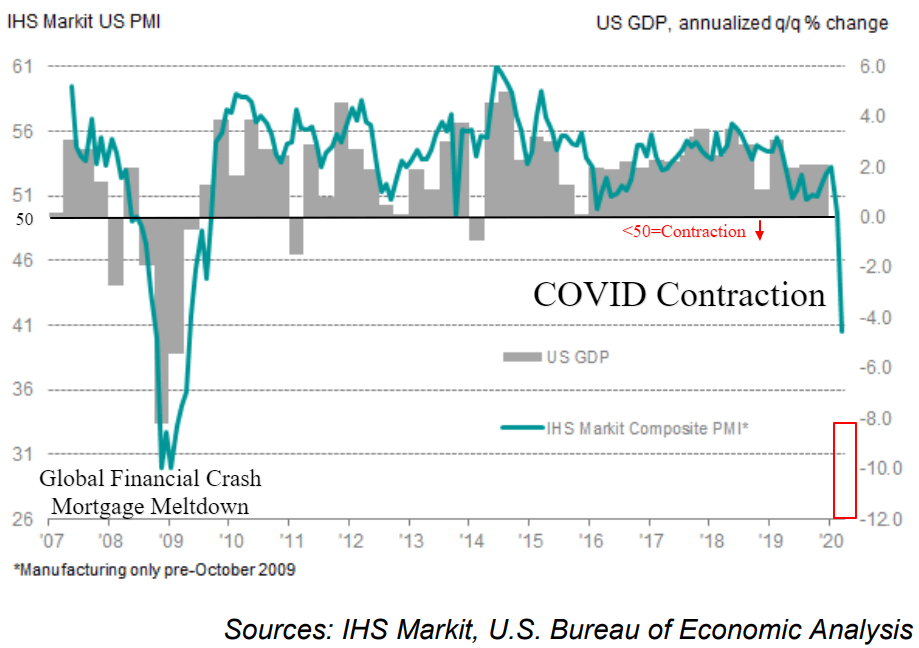 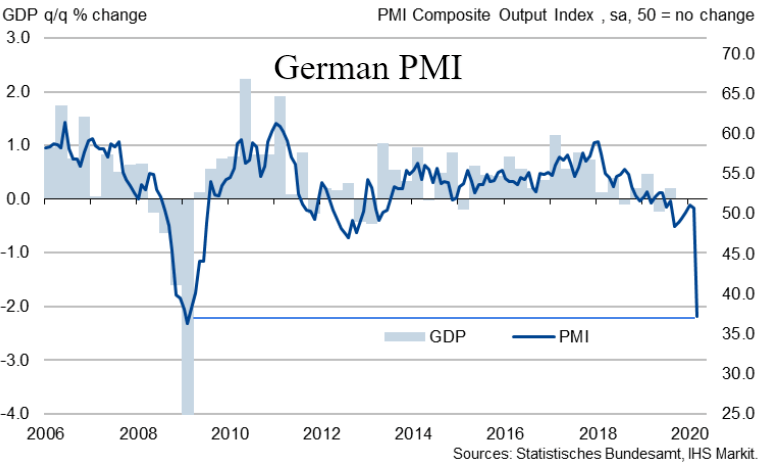 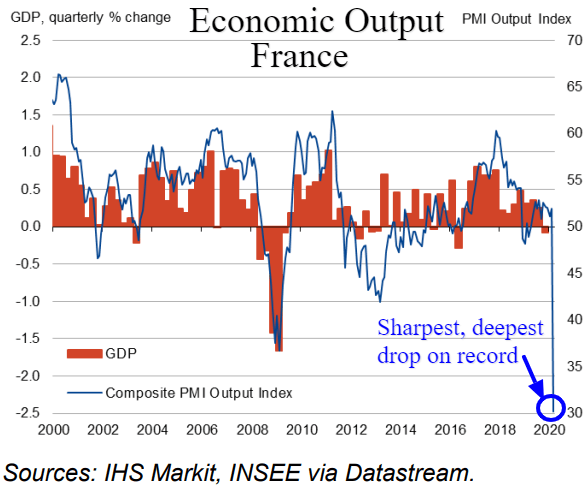 This week, benchmark stock indices in the US rebounded faster than any move since the depths of the Depression in 1932. In just the month of March, so far, we have now experienced the fastest Bear Market move (>20% down) and now the quickest Bull Market (20% higher). The overused 20% metric should have been retired from our financial lexicon decades ago, but it speaks to the amazing price volatility and anxiety out there. Some of this downside volatility was reduced by the President’s confidence boosting statement to terminate the Government mandated economic Recession along with other stimulus measures that replaced fear with a bit of greed. In 2019 Trump was masterful at frequently messaging investors at every downturn to keep US stocks inflated, making up stories that the US Trade War with China was going well and victory was at hand. The President has once again begun a persuasion campaign regarding the COVID-19 virus to temper trepidation and boost stock prices by assuring us the invisible enemy will be defeated and the economy will roar back to life soon.

On February 21st (+ or – 1 day) we were looking for a correction to begin and last for 1 to 3 months. In less than a month our proprietary technical indicators (below) relating to sentiment have traversed from overbought at the top on February 20th to record oversold levels over the past 2 weeks. Currently the odds are that a low for this Bear leg down is over. However, breaking the recent 36% correction lows of Dow 18,200 and SP 2,180 would be disturbing in its implication that no matter how much money the Fed prints or how low borrowing rates become and regardless of how many Trillions the Government sends to individuals and businesses, there is no cure for this viral crash in stocks other than a viral cure. That medical cure for the economy would be a natural reduction in the rate of active Corona cases, a viral treatment that normalizes hospital capacity or an anti-body immunity drug. We don’t think that dire implication is the favored scenario “yet”, but the current lows in the stock market are meaningful to us. One more additional trigger for a new panic to new lows in equities would be a collapse in Oil prices. We continue to expect more negative energy news dead ahead with Oil under $20 ($16 to $19 ideally). Some Oil companies feel there is risk to even $5 or lower which would trigger a mass default in the energy sector and beyond that will elevate fear and volatility. The Fed and geopolitics will come to the rescue eventually with supply restrictions and Fed backstopping banks that may curtail funding across all sectors short term.

Normal swings from economic expansions to recessions have endogenous causes where we rely upon a variety of technical indicators to navigate. While these tools remain important, the current Recessionary collapse was an exogenous biologic surprise. The record speed of this decline moved our indicators into oversold zones too quickly in mid-March, which we fortunately ignored in our advice as we presumed that this Government mandated Bear market required patience while looking at more pandemic related signs. The first sign was the almost simultaneous three pronged attack on COVID’s economic assault through unlimited Monetary and Fiscal stimulus combined with the President’s clarity that an economic reboot was near. The next sign will be various indications of improving metrics related to active cases and treatment viability of COVID-19. Thus while the market lows could be in, a steady path back to record highs is premature until active Corona cases plunge by >75%. Thus we suspect a base building trading range is currently being formed this week that could continue into April and May as a plethora of foreboding financial and medical news is absorbed. A move to new lows along with Oil crashing below $16 would signal that another multi-week down move was underway toward the 50% Bear market correction zone. For now we favor a more cemented low in May as the Corona contagion curves should confirm rollovers with more successful treatments that accelerate the opening of the economy. 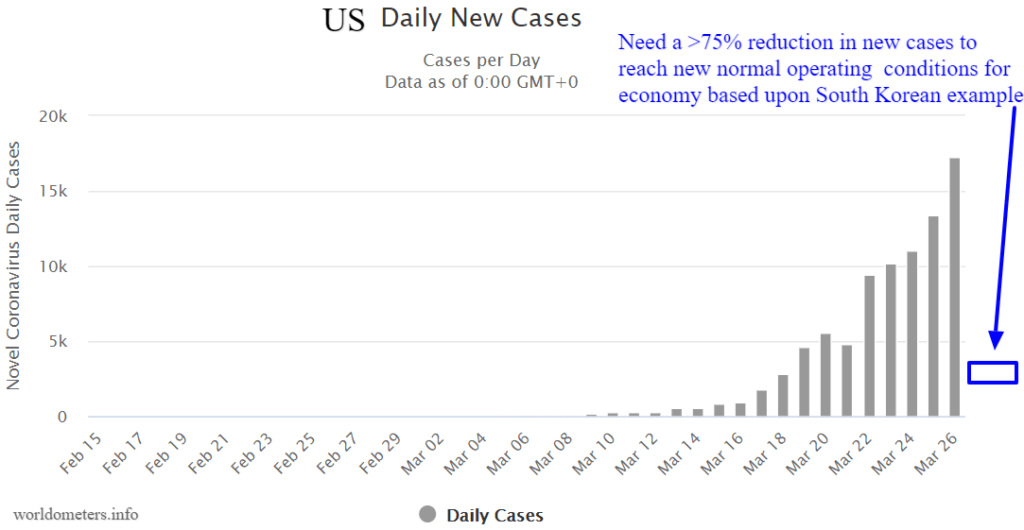 What Coronavirus Data Can We Trust From China?

What Coronavirus Data Can We Trust From China?
Ready to start creating financial success? START YOUR FREE TRIAL