Unemployment: Darkest Before the Dawn

Sensationalism Sells and our schadenfreude media must be clamoring for their Starbucks fix to keep up with the proliferating once in a lifetime scary Corona stories. Portraying life as a dystopian disaster film manipulates society’s collective anger with the macabre tracking of daily Covid death counts, bankruptcies and comparisons among states and countries to see who is winning which metric. With the unemployment rate of change rising more quickly in percentage terms than even the Great Depression of the 1930’s, we are drawn into an eerie live theater event that is moving rapidly toward reality at many doorsteps. While 80 year records are being set with the 15% Unemployment reported for April, most experts assert this understates the actual real time levels that are likely in the 20 to 25% range. As the economy opens up in in the months ahead we expect almost half of those employment losses to be recouped before year end, yet remaining near Recession levels. One thing is clear, it literally pays to have an education if you want a job. Those with little education, often in the service sector, are experiencing 21% unemployment, while the College educated are closer to 8%. 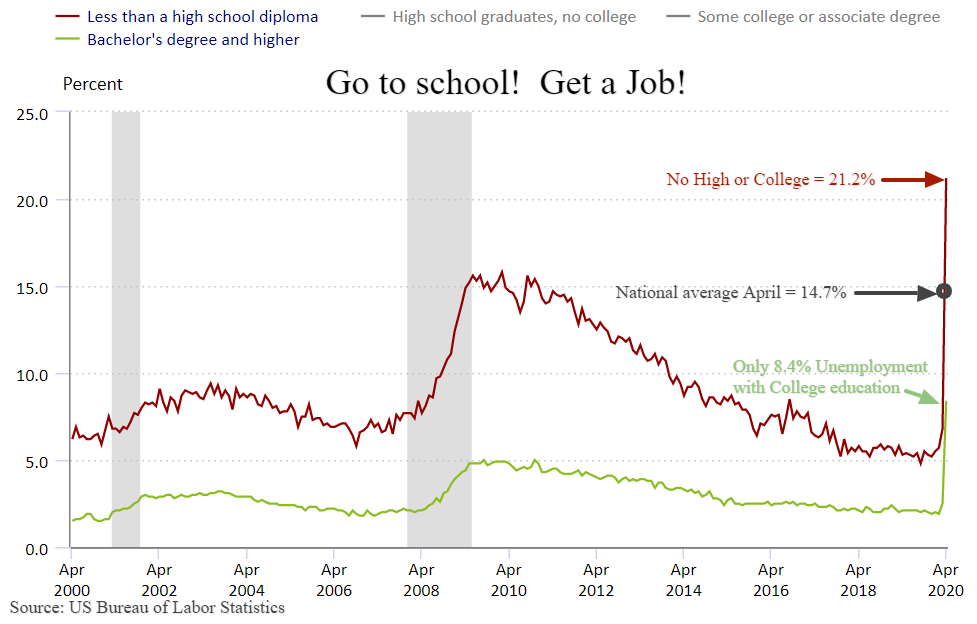 Normally 15 to 25% Unemployment alongside a potential 30% contraction in our GDP this quarter  would send consumer and business sentiment to record lows. Thus far most are numb to the full effect of dire measures of misery that abound, on paper. In part, the shift from full employment just 2 months ago to record unemployment has barely had time to move from the headlines to our bottom lines. Also, Government and Central Banks around the Globe have moved with relative lightening speed funneling income replacement Trillions to individuals and businesses to compensate a portion of their short term cash flow that Governments removed in the economic shutdown. When the helicopter money is halted without a major resurgence in the economy back to “normal”, then a more entrenched pessimism could pervade our collective psyche. Looking at US companies operating in China we can glean some expectations for the US as we climb our hole of hope, before despair sinks in too deeply. Since China began their reopening plan 3 to 4 months ahead of the US and Europe, we can see their example of subdued but gradual growth. Starbucks and Apple among other foreign entities in China have taken 2 to 3 months to reopen virtually all of their stores and they report growing sales each month since the February bottom. Despite progress, the Chinese retail sales data requires a long journey back to positive year over year comparisons, as will the US and Europe. 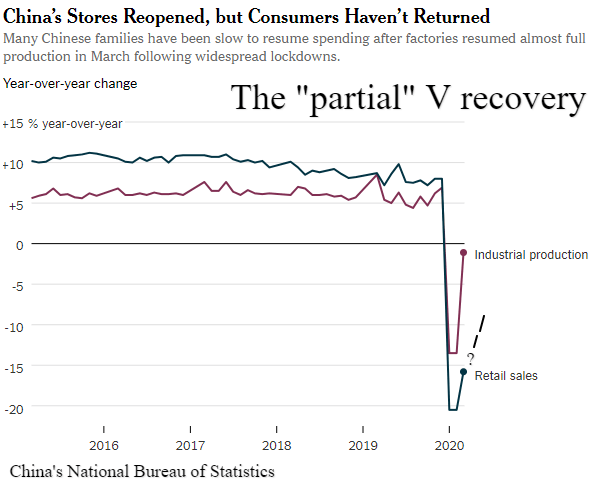 Unemployment and many data points in the US will look even worse than today by the end of May, even though most states will be in an early stage of kick starting their local economies. The consensus currently estimates a record 28% GDP contraction in the 2nd quarter. Yet there are signs the rate of decline is already slowing, as exemplified by the consumer and business activity indices shown here. Government handouts, as well as cabin fever, migration away from infected cities and a gradual opening around the country in May and June are all converging to ignite a modest economic rebound in the final weeks of this quarter with a an acceleration expected in the 3rd quarter. However, the sharp pent up demand recovery this Summer may quickly morph into a slow growth mode until an effective mass treatment for Covid-19 is available. Once the inventory restocking rebound matures in the 3rd quarter, the consumption bounce will flatten out in a new normal of slow growth until confidence over Covid is cured medically. The stock market has discounted most of the Summer reopening bounce and we estimate it will move into a trading range 7% above and 10 to 15% below current levels (SP 2935). 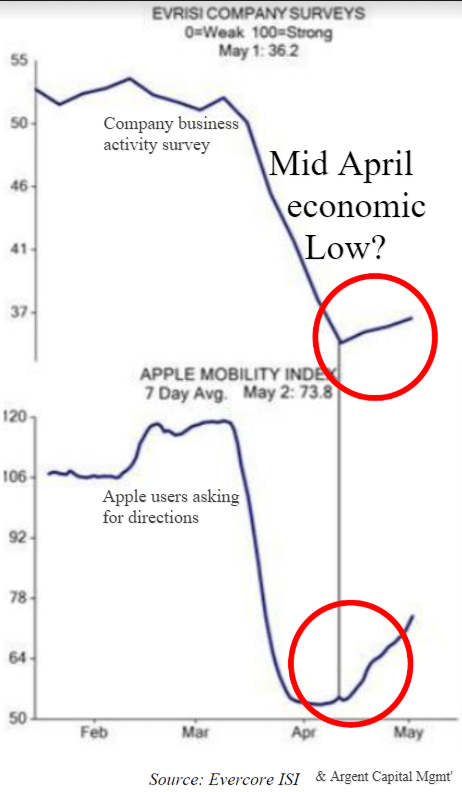