The Bureau of Labor Statistics (BLS) states clearly that 95 Million people in the US are not in the labor force! Those who are quite alarmed by this shocking number include: Chief Economist Dan North, CNBC financial reporter Rick Santelli and Peter Boockvar, Chief analyst of the Lindsey Group. Echoing these paragons of credibility is President Trump claiming the official BLS 4.1% unemployment is a bunch of BS, as the real number is closer to 40%  with 95 Million available to work. Even a 2017 article by Tim Worstall of the respectable Forbes magazine wrote tongue in cheek that Trump is correct and there are indeed 96 Million unemployed in the US – if you could pay them enough money to do something, no matter how minimal. With such logic by allegedly well educated experts we would state they are all incorrect as the real number of unemployed should be 172 Million when including every age bracket from birth. After all, if there are 327 Million citizens out there, why not simply subtract the 155 million currently employed to reveal the real number of 172 Million lazy souls from nursing homes down to infants at home nursing? With so many people choosing leisure it’s doubtful that a Malthusian famine is on the horizon. The truth is:  45 Million are retired, 16 Million disabled, 13 Million are family caretakers, almost 16 Million are in college or job training, 2 Million in prison and 2 Million over 84 years old. Don’t forget about those 78 Million children on the playgrounds and gambling in school locker rooms. In reality there are less than 7 Million unemployed adults and 5 Million who want a job, but have given up looking according the the BLS. Historically, this is an extremely tight labor market as the prime working age population is growing at 0.5% a year while the 65 and older bracket is expanding twice as fast. 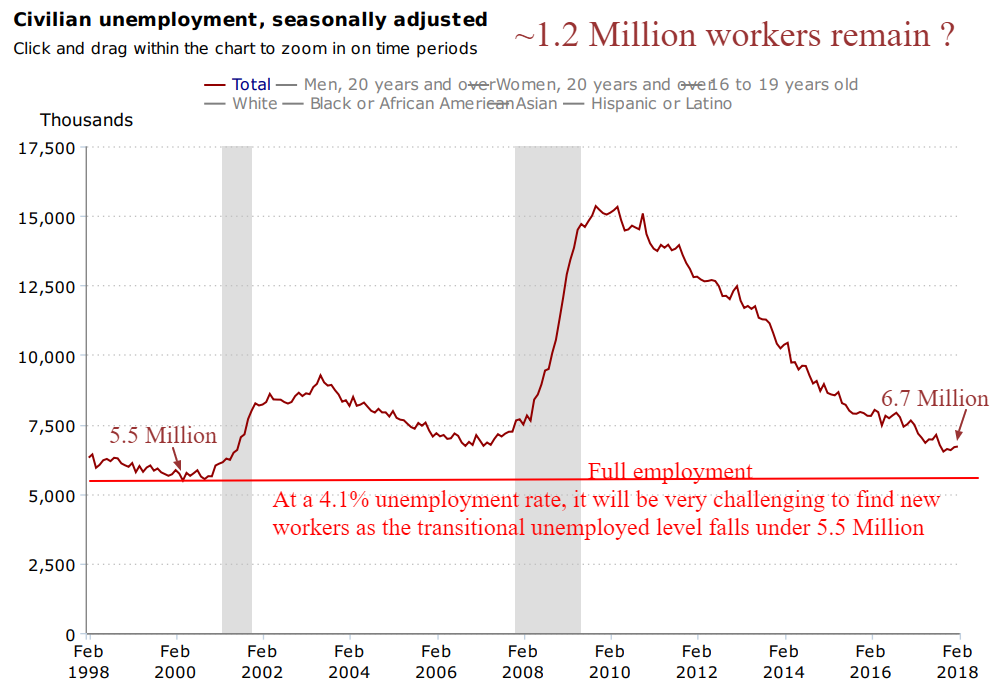 There are a record number of unfilled jobs awaiting the dwindling number of unemployed that want to work or have the skills to provide the talent required. Even with  a record number of seniors delaying retirement, there remains a lack of youthful entrants waiting in the wings to take their place. 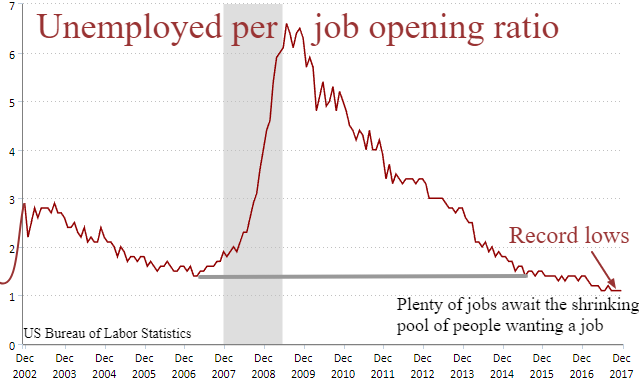 Who wants to work? Not the 95 Million we hear about. The labor shortage has been percolating for several years, but the past year of faster US and global growth has revealed how severe this shortage is becoming. Lodging, food service, retail and healthcare are the industries with the largest shortfalls in labor, while the critical supply chain providers such as truck drivers and factory workers in the goods producing sectors are hitting severe production limits as well.

Virtually every industrialized nation on the planet is experiencing record job openings with a lack of human resources to satisfy demand. The Western World leaders: US, Japan and Germany have their lowest unemployment rates in 17, 25 and 27 years respectively.

Over the past decade the bulging wave of Boomers have been exiting their peak earning years in their 50’s into retirement faster than new workers can enter the labor pool. This population chart resembled a demographic pyramid from the very bottom 50 years ago, but over the next 20 years it will revert to its more natural rectangular shape of age distribution. Before the population pyramid becomes a full rectangle in the 2040’s, there is risk periodic overheating and financial debt panics. The good news is that inflation risks will remain subdued without anymore baby booms rising through the ranks. Only war, famine and depression are likely to create a new pyramid boom similar to that of post WWII. 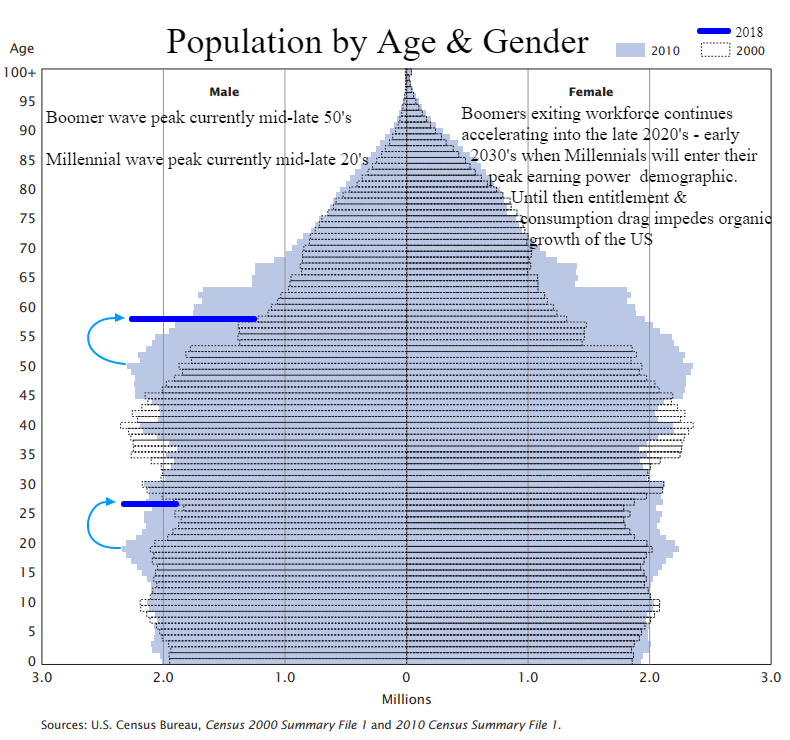 A recent Barron’s article illustrates the history of labor shortages and surpluses. This provides another picture forecasting that any economic expansion phase will encounter growing labor shortages and increasing reliance on automation or emerging market labor until the 2040’s.

The 1st world countries retirement wave and corresponding secular shortage of human labor bodes well for the rise of collaborative robotics, stand alone automation and artificial intelligence. This digital revolution will continue to add fuel to the intellectual property battle over which Trump is now getting ready to wage. 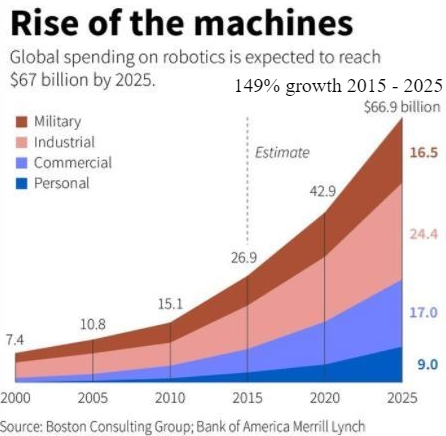 With massive budgetary challenges from entitled boomers heading into retirement and disability, new investments become more critical to offset the inevitable growth of unfunded obligations. Unless there is a recession, it’s clear we need much more automation, retooling of existing labor and acquisition of new labor from abroad as the tools to our salvation. Rising productivity and profits in this world of IT and Cloud leadership paves the way for many opportunities in stocks in the turbulent years ahead. Think of Tech as more secular than cyclical. The new equity Bull market of 2016 still has room to run as production grows into the rising backlogs and profits grow into lofty stock valuations in 2018.