Today’s economy has often been called the Goldilocks economy: it’s not too slow or fast, it’s just about right. Economic Goldilocks today is manifested by persistently low inflation, interest rates and unemployment with simultaneous strong economic and income growth. After a record setting 10 year growth phase, the US is still firing on most of its cylinders achieving 3.6 percent unemployment (a 49 year low), 3.2 percent wage growth (a 10 year high) and a surprising 3.2 percent GDP expansion rate. The 9 quarters under Trump have averaged 2.8 percent GDP growth, far above the 1.9 percent during the previous 9 quarters. The US economy is the envy of the world, outperforming the moribund Global economy over the past 5 quarters. In order to sustain our above trend expansion rates and stave off any risk of an economic contraction, the US needs to resolve its escalating trade war with China. Back when the English Goldilocks fairy tale was published in the 1830’s, England used gunboat diplomacy to secure the terms of trade with China during the Opium Wars. Today Trump uses the cudgel of tariffs to force his terms of trade upon China. After a year of 10 percent tariffs against China, Trump feels vindicated by peak prosperity in the US while Chinese manufacturing has been decelerating. The strong US economy and massive trade deficit with China has emboldened Trump to hike tariffs to 25 percent today and risk slower growth in order to get the trade agreement that delivers on his campaign promise. 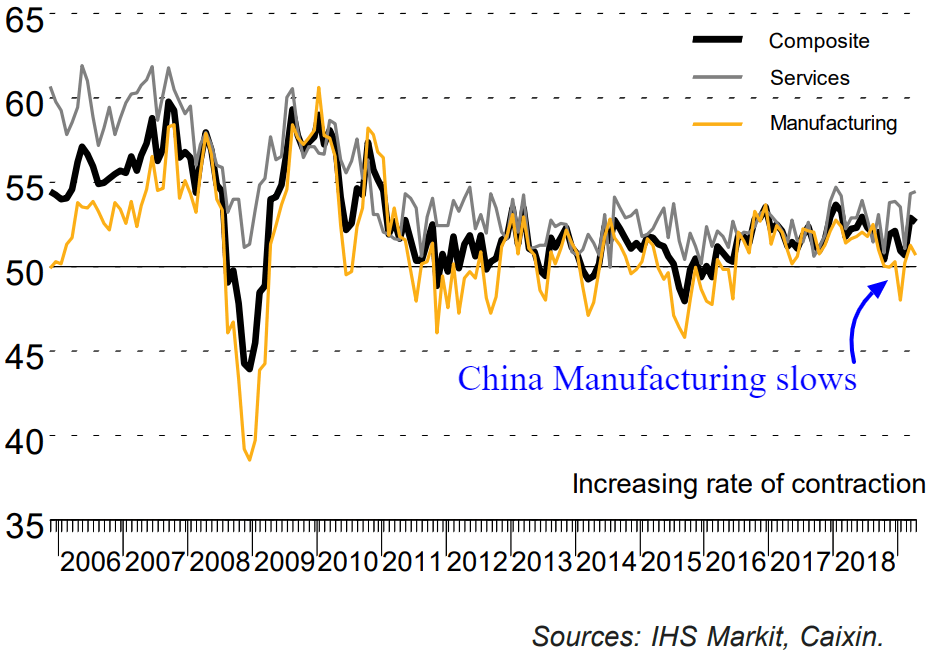 Historically the quickest way to shrink our trade deficit has been to have a recession. Under Trump our trade deficit has grown with our accelerating consumption based economy. Our 2018 deficit grew 12 percent to $621 Billion, with a $323 Billion deficit just with China. With 2019 on the same trajectory as 2018, there are few signs of this growing long term imbalance changing, unless the trade war triggers a global recession. While intellectual property protection and structural reforms in China are vital, with near universal political support, be careful what you wish for. However, if deficits fall during a strong economy under Trump, it will be a monumental achievement.

The catch 22 for Trump’s America First prosperity agenda is that his long term trade battles have engendered falling global exports and reduced purchasing managers confidence. Our personal connection to international manufacturing reflects a US GDP closer to 2 percent than 3 percent. This tariff threat worked in favor of the US initially, as orders increased ahead of implementation and production shifted to our low tax business friendly confines. At some point this year, in order for Trump’s game plan to continue performing to perfection, he needs to secure an historic trade deal with China and other nations. Many feel the US should focus its threat against China with a united front of our allies, but Trump likes having total freedom to implement his Bullying tactics, unimpeded by other leaders. Additionally, it’s difficult to enlist allies when we continue to ratchet up trade hostility toward them. It’s quite bold for Trump to zero in upon the European auto industry at a time when this major sector is in recession. It may be fair to say that in a year from now, as the election climate heats up to a fever pitch, Trump could be the conquering hero or flailing in quicksand, depending upon the progress of trade deals with Europe and China in particular. 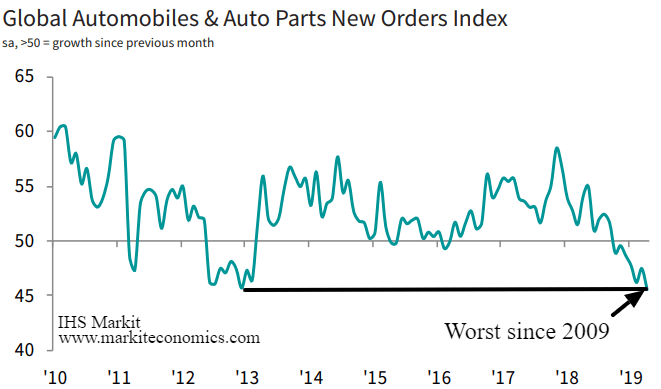 The good news in this escalating trade conflict is that both the US and China need a trade agreement and both sides want to continue talking while they posture with risky trade barriers. Markets assume with high confidence that this resolution is only a question of when, not if. Investors continue hanging onto hope as exemplified today when the stock market plunge hit its correction low of 4.6% on the S&P 500 futures and then reversed all of its loses for the day. It was a sell the rumor, buy the news event.

A couple clues to watch for when a trade deal is close will be money flows back into Copper and Soybeans  – two sectors that will anticipate a China rebound. While Chinese stimulus and its domestic growth can prop up the global copper market, stockpiling for future demand will accelerate if China and the US come to terms on trade.

A strong US Dollar and excellent moisture levels are adding downward pressure to Soybeans, but subdued buying from China will limit rallies. With the US and Brazil cornering the Bean market, China will use major purchases here as an easy no cost accommodation for a trade agreement with the US.

While we perceive the US economy to be decelerating in the first half of 2019 well below the reported 3.2 percent GDP growth, we are still hanging onto a Goldilocks economy that can only continue with a new US and China trade agreement. The stock market may carve out a trading range near the range of the past couple of weeks as long as there is no deal, but friendly negotiations continue. More hostility and cutting off negotiations between these superpowers could send stocks down over 10 percent, while a successful trade deal should send prices to new record highs in anticipation of a rebound in the Global economy and earnings. The expected near term trade war escalation risks a break in June S&P 500 Index targeting the 2740’s, at the 7 to 8% correction area in the weeks ahead.