Trump Veto of Hong Kong Sanctions Would be Positive Signal

Trump has 10 days to decide on approving or vetoing the House legislation on Hong Kong Human Rights Act (HR3289) which just passed in the House. This relatively toothless Bill is meant to embarrass the Chinese and President Trump, declaring China a Human Rights violator and daring the President to object. All the initial media reports and insiders stated that Trump will sign this Bill, yet today as reported by Reuters the President stated: “I stand with freedom (Hong Kong protesters). … But we are also in the process of making one of the largest trade deals in history.” Thus Trump may agree with the political sentiments of the sanction legislation against China, pragmatism may win as we interpret his comments to mean he will not sign HR3289 as long as a China trade deal is close. If our reading of the tea leaves is accurate, it implies Trump still feels a skinny Phase One trade deal with China is within reach in the next month or so. A Trade victory or much stronger economy is needed before the 2020 election for Trump’s reelection and slapping the Chinese in the face in this tenuous phase of negotiations would be too risky. Assuming a Presidential veto occurs, then it will require a two-thirds majority of the House and Senate to override. With Hong Kong announcing limited democratic elections today, approved by the main protest leader, Trump may have a further excuse to wait on signing this Bill.  Meanwhile, the Hong Kong economy is a shamble, having moved from mild contraction in the Spring to a major contraction in the Fall. Business sentiment now resides at the lowest level in history. With Hong Kong garnering a disproportionate share of the world news in recent weeks relative to its economic importance, Chinese President Xi has an incentive to keep the trade negotiations moving toward a quick resolution on a Phase One deal to keep this US Bill from becoming law. Trump’s hint of a veto puts the ball in China’s court and is a positive nugget for the stock market. However, even if Trump signs this Human Rights Act he has great latitude to avoid enforcement and use this as leverage to encourage China to compromise on the trade negotiations underway. 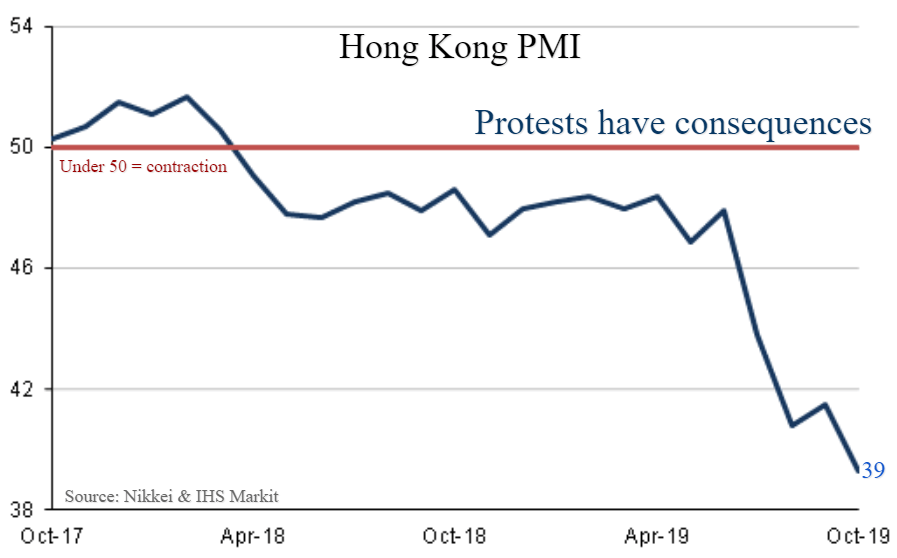 As we have outlined before, the US stock market entered normal overbought territory this past week, but being a China Trade News driven market, prices may remain comfortably above the normal 5 to 10% correction zone as long as the trade negotiations are active and no new Tariffs are implemented. Should the new tariff hikes scheduled for December 15th be triggered, then stocks will sell off sharply. While Trump will not allow these hikes if negotiations are progressing, likely postponing them, any escalation of the Trade War could easily send stocks back to their summer lows. The long term outlook remains positive, while short term is increasingly vulnerable into the December tariff deadline or until the next shift in Trump’s trade commentary can add clarity. Our divination of tea leaves indicating Trump will not sign the Congressional sanctions against China OR avoid enforcement is a Bullish tailwind as the market continues to ‘buy the rumor’ waiting for the elusive chance to ‘sell the news’.