In a moment of unprofound insight lacking sound and fury meaning absolutely nothing to investor expectations, Fed Chief Powell this past week made the most anodyne comments possible that the economy was likely to continue growing. It’s also likely that the Fed has never forecast anything but continued economic growth as it tends to be reactive rather than proactive. When the Fed raised rates twice in the fourth quarter of 2018 against investor wishes, the stock market punished this Fed defiance, plunging over 20%. Fed Chair Powell learned his lesson and instead of raising rates 3 times in 2019 as planned, he reversed course with three rate cuts.

With roughly 2% GDP growth, historically full employment and stable inflation, the Fed has actually been meeting its 1977 Congressional mandate of maximum employment, stable interest rates and low inflation, with no more rate cuts required. While the Fed is technically satisfying its mandate, they also continue to have cover to cut the Funds rate further in 2019 as their preferred inflation measure, core personal consumption expenditures index (PCE), has persistently fallen short of the 2% target. Following the PCE data is important to gauge Fed policy, but we can often glean some advanced inflation warnings and future policy action by looking at the relationship of the more volatile food and energy component of non core PCE. When food and energy prices began rising faster than core PCE in 2017 and 2018, the Fed used the excuse of future inflation fears to raise the Federal Funds Rate 8 times, even though inflation on average was below their stated target. As core PCE inflation began falling under 2% again in late 2018, with the economically sensitive non core PCE decelerating even quicker, the Fed realized the error of its ways and assured panicked markets there would be no more rate hikes in 2019 as previously planned. This sudden shift allowed the stock market to soar earlier this year. By July of 2019 the Fed realized the US and Global economy had slowed inflation even further, pushing them to institute several rate cuts over a brief 3 month period recently.

Over the past month stocks and free market bond yields have rallied, in large part due to ever growing expectations that a Phase One Deal on China trade will be signed before the threatened new tariffs take effect on December 15th generating expectations of renewed economic (GDP) growth. If there is no deal and new US tariffs upon China are enacted, then the Fed may reluctantly cut once more to reduce the likely correction in the stock market and commodities that should ensue. If this tariff decision comes down to the wire in December, there will be heightened tension in the global markets as the Fed has to make a decision on rates December 10th ahead of new tariffs hikes scheduled for December 15th. This is why we highlight the importance of the Phase One trade deal with China and the commensurate tariff decision needing clarity before the fed meets next month to affirm or concern investors as well as businesses. 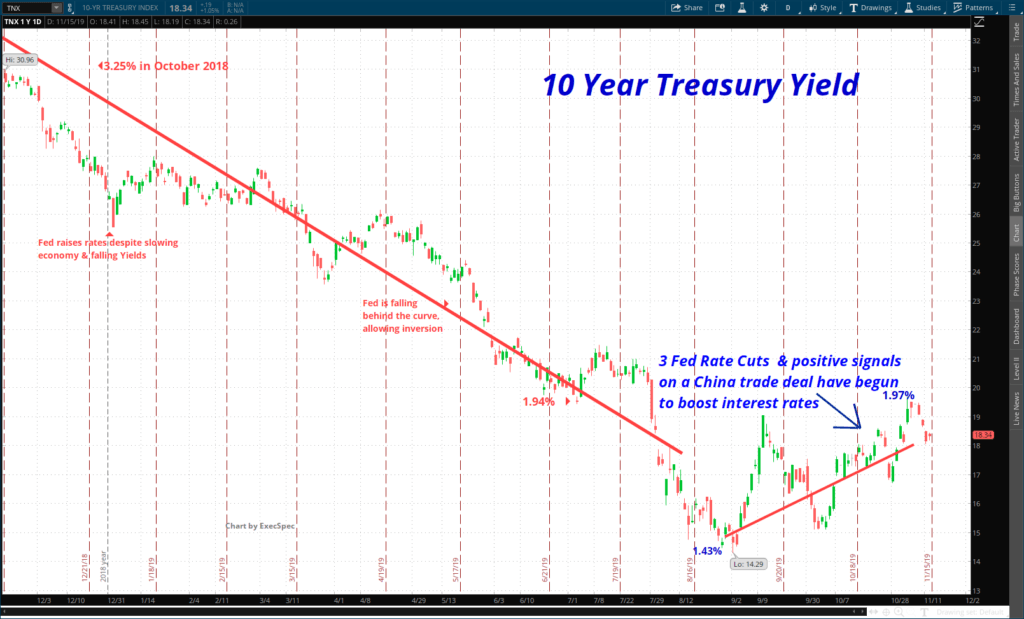 With the important Chicago Purchasing Managers Index and various Manufacturing indices in contraction at 4 year lows and continued stagnation in food and energy prices, there is no hint that inflation is going to rise back to the Fed’s 2% goal in the next few months. To paraphrase the Fed Chairman: slow growth, low inflation, low interest rates and near record low unemployment may all be the new normal. A successful China Trade Deal could test this new normal, however, without a trade agreement there is unlikely to be trend reversals in these metrics anytime soon. The flush consumer trends continue holding up the world economy and with full employment, strong wage gains and stock indices hitting new record highs, a Phase One trade deal with China may ignite a new new leg up in the economy. The stock market and economy will react adversely to new tariff hikes on China by the US due to a No Deal outcome in December. Conversely, since most of the short term gains have already been realized from a successful trade deal that cancels new December tariffs, it’s likely there would be a short term top after a Phase One deal is signed, but then a broadening leg higher in 2020 after some consolidation.