Recent headlines have talked about heavy insider selling as a clarion call for a Bear Market lower in stocks. While a major stock market correction at these record heights can occur at any time, there is an assumption that record stock buybacks this year are causing extreme Insider Selling, indicative of a stock market top. Often Bears come out of hibernation when any extreme metric is reached, such as stock repurchases. Record stock buybacks typically occur in very positive investment environments when companies have excess cash and feel their stocks are undervalued. When record repurchases occurred in 2004, 2005 and 2006 we were nowhere near a market peak. This begs the question, how high is too high? Clearly the tax cuts, repatriation and explosion in higher earnings in 2018 have triggered another record year in companies adding shareholder value shrinking the outstanding share float. There is no history that would indicate when share buybacks are too high. 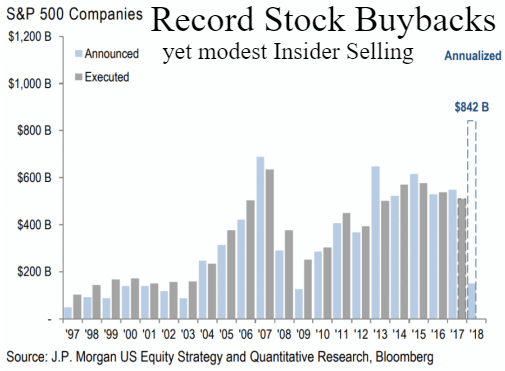 While a mild uptick in Insiders (Directors/Officers) selling their stock may be occurring, it remains unusually modest in the larger picture. In fact the most extreme Insider selling of 2018 occurred right after the double digit stock market correction. There is no correlation in 2018 that would connect Insider selling peaks with peaks in stock prices.

In viewing the big picture over the past 14 years its clear that Insider selling extremes often occur early in a new Bull market and long before any stock market or economic peak. Note also that November is often a seasonal peak in major selling climaxes, calling into question the importance of peak selling by corporate officers and directors with inside knowledge. However, when we see those rare spikes in Insider buying, we should all consider adding to our equity portfolios.

Many seek headlines to declare the end is near and while the stock market may be due for a greater than 10% decline, Insider activity does not appear to be the signal we should worry about. However, elevated Call option buying by traders and the proximity of contentious mid-term elections does support a short term trading range market outlook. Stocks are indeed vulnerable to large shocks longer term, such as a new leg down in Emerging Markets or an expanded Trade War, but until strong sell signals arrive or when stock index prices fall beneath the important 2 to 4% correction zone, we will be patient with this Bull market.

You Want the Debt? You Can’t Handle the Debt!

You Want the Debt? You Can’t Handle the Debt!
Ready to start creating financial success? START YOUR FREE TRIAL