The Fed money printing machine, zero bound borrowing rates and Government handouts are the primary factors in a record breaking 5+ month rally that has surprised all forecasts. Another tailwind for stocks have been the improving poll numbers and betting market sentiment trending toward a Trump victory. The average of nominal polling surveys are clearly in Biden’s favor, but as we have shown previously, relative to Trump’s deficit in 2016 at this stage, the data indicates a tight race that the markets feel Trump will pull off once again.

Some of the betting markets that gave Clinton an 80% odds of winning right up until election day 2016 have learned to temper their sentiment and currently give Biden a 52% odds of winning in 2020. These charts below provide a more widespread average of betting and polling data that indicate surprising optimism that Trump is at least even or ahead of Biden. Of course polling is inexact as pollsters don’t tally equal population samples of registered Republican and Democrats. Virtually all survey organizations assume that more Democrat’s will vote than Republican’s. The average of betting odds clearly shows some correlation with stocks and sentiment towards a Trump victory. As we have mentioned, the election results are not the primary factor in the stock market valuation, but polling trends do show additional tailwinds and headwinds for stocks. 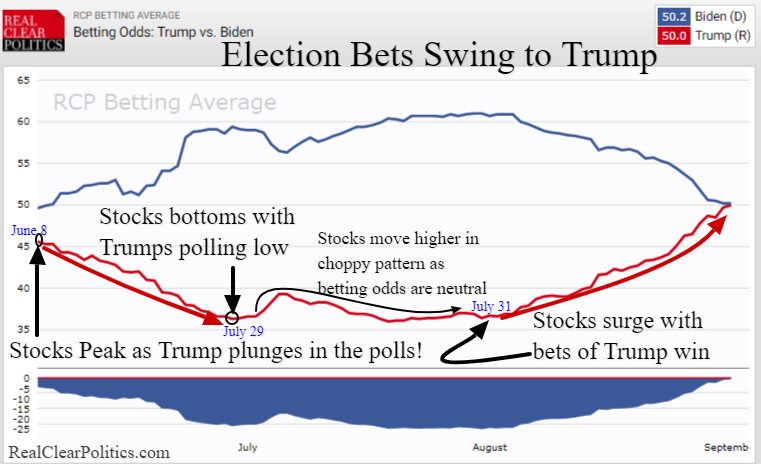 As displayed last month, Trump may be behind in all polls, but relative to his deficit with Hillary Clinton in 2016 on this date, he continues to trend positively. If this chart moves into the the Blue, it will mean Biden is performing even better than Hillary in 2016 and could stall the stock market rally. With the very low bar of expectations for Biden in his 3 key debates with Trump, it looks like October could be volatile for the polls. The extremely unusual voting shift of a majority of Democrats voting early by mail will add a tremendous amount of additional uncertainty to the election outcome.

An interesting look at the Volatility Index (VIX) pricing indicates record uncertainty surrounding the election period. Stocks move on “expectations”, not current data, and this butterfly spread of VIX indicates the stock market has not priced in the outcome. 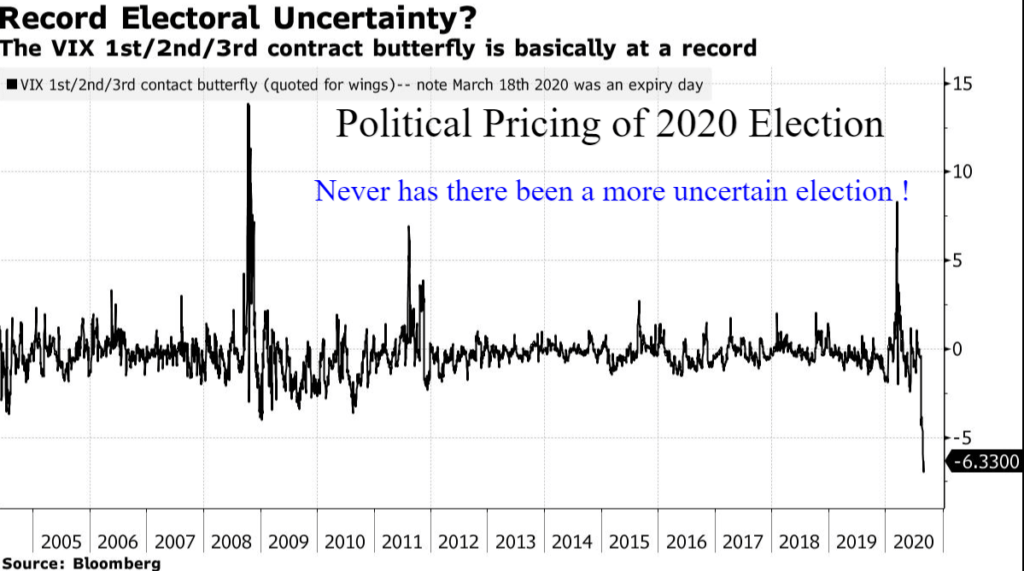 Technicals for the first time in this 2020 Bull market are “approaching” a unanimous opinion that stocks are overbought and due for a larger correction. (Inflection date 09-02-20). However, we continue to avoid hedging and shorting the market as long as short term supports continue to hold and maintain a solid uptrend. Clearly there appears to be a climax buying wave in stocks since the end of July that feels increasingly like January 2018. Should the stock market uptrend break down, corrections may be limited until the post November 3rd Election period as the expectations will stay focused upon economic opening progress, stimulus and the all important announcement of a successful vaccine as early as late October. These factors may keep optimism elevated despite extreme overbought metrics of the stock market. The short term uptrend begins breaking down upon a breach below the 3530’s (& 3490’s) basis the S&P 500 Index. Below this opens up significant support of 3200 to 3400.  {Upcoming reports will look at panic buying in new tech, inflation and sectors to buy near year end}