One of the better known stock market adages is that Bull markets climb a wall of worry. The wall of concern created by Covid has been a long one as the running of the Bulls out of the Bear trap in March continues unabated. The economy can’t fully open up until herd immunity to Covid arrives, thus the worry wall will keep Bullish investor funds expecting more stimulus boosting equities into the 2nd quarter when mass inoculations are due. Warren Buffet is credited with saying, be fearful when other are greedy and greedy when other are fearful – in other words act contrary to popular opinion. Unfortunately, there hasn’t been many bouts of fear in this market for months as the good news keeps rolling in. The stock market Bulls require being fed ever more  positive news to keep charging higher and this Bull has been well fed. Trillions in Central bank and Government fiscal stimulus. A strong rebound in manufacturing and service sectors with faster wage and job growth than anyone had forecast. The negative catalysts are hard to find as short term fears of a dark Covid winter with renewed lockdowns are overlooked by an expected proportionate Federal stimulus response to provide a bridge to a Covid free future.

While some worry about inflation from the sharp economic resurgence juiced by so much artificial stimulus, inflation (core PCE) remains far below the Fed’s target. Few understand that printing money by the Trillions is a response to fears of deflation and the declining velocity of money and does not necessarily cause high inflation. Starting in March/April into late 2021 there will be a transitory inflation rebound back to the 2 to 3% zone due to year over year comps and supply chain shocks as pent up consumption demand works through the economy. However, there are no signs of worrisome long term inflation on the horizon like the 1970’s when the Dollar revalued after losing its Gold backing.

When Unemployment exploded to 15% last April due to the lockdowns, the leading economists didn’t expect the jobless rate to fall below 10% until 2021 as employment is always a lagging indicator. However, the Fiscal stimulus of $2.2 Trillion and more precisely the Payroll Protection Act prevented Unemployment from leaping beyond 20% and quickly gave confidence for businesses to rehire workers. With Unemployment now under 7%, we would expect just modest improvements until Q2 and then potential labor shortages by early 2022, assuming the Covid cures allow a full reopening of the economy by next Summer.

Not only are jobs coming back, but individuals are benefitting from record low borrowing costs and extremely low debt service burdens. Of course cheap rates are one of the major reasons behind the seemingly inexorable rise in housing costs as borrowers can afford more which exacerbates the home inventory shortage.

Wages and income growth rates typically collapse during a serious Recession, yet the quick action by our Fed and Congress have kept earnings accelerating similar to normal economic expansion cycles. 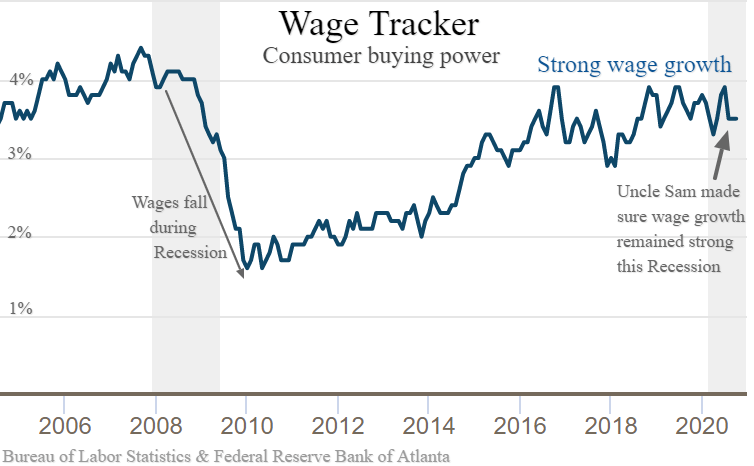 While much of the temporary excess in personal savings has been utilized, the consumer continues to have well above normal reserves to tap.

Individual balance sheets always worsen in a Recession with more defaults and delinquencies. This time the consumer balance sheet improved and is now registering the fewest delinquencies in modern history. The average credit score in 2020 (711) hit a new record for the past 2 decades and stay at homers are buying homes, boats, RV’s and bikes as if this was there last chance.

The first phase of recovery from a serious Recession is correlated with a sharp rise in demand for metals. Steel, Copper and base metal production are indeed escalating rapidly to meet the V recovery in demand – led by China. US Manufacturing Purchasing Managers (PMI) are the most optimistic in over 6 years with robust new orders for equipment along with good employment and wage growth.

More important than manufacturing is that the devastated Service sector, which accounts for over 77% of our economy, has also rebounded more sharply than anyone expected. Despite almost 10 Million workers still needing a job to reach pre-Covid levels, it’s a good sign that job growth and spending are rising quickly despite the economy increasingly in Covid lockdown and months away from being fully open for normal business.

When the pandemic became reality in the Western World last March and the planet went into an unprecedented economic and social lockdown, it appeared a mini Depression ala 1930’s was at hand. The number one effort by Global authorities, led by the US, was to find a cure for Covid and build a financial bridge to a reopened economy. At the time, the consensus was that a Covid vaccine cure would be a 2022 event. That’s when the Good News Train began rolling out of the station on March 23rd with Central Banks across the Globe dropping core bank borrowing rates to zero and adding Trillions in unlimited quantitative easing. Governments soon followed with Trillions more in fiscal stimulus that primarily afforded employers to keep idled workers on the payroll and boosted unemployment and transfer payments to recharge depleted consumer spending capacity. As these programs lost there financial luster in the later part of 2020, the first wave of successful vaccines arrived and a more confident economy began expanding without Government aid. With renewed winter lockdowns now accelerating across US and Europe, threatening another March heart palpitation, our Government appears on the verge of bringing the fiscal defibrillator paddles back out in time for a winter stimulus package. Investors keep buying stocks and IPO’s at a frenzied pace, certain that the more dire the economy the larger the pipeline of Government spending that will be provided. Until the vaccines complete their bridge in Q2/Q3’s post Covid economy, investors will be buying every dip as they did in 2017 prior to the 2018 tax cuts. Buy the rumor, sell the news still applies, but the news of an open economy is still months away.