Covid is Messing With Texas and Investors

Don’t Mess With Texas! Covid-19 is threatening Texans proud history of First Amendment expression. After more than 2 months of social distancing and thousands of shuttered businesses, Texas partially opened its economy in May and June. Thus it was not a surprise that Covid cases began rising in the Lone Star state in late May and went parabolic in mid June. The jump in cases in Texas, Arizona and Florida in particular have had medical authorities sounding the alarm and the nation holding its collective breath. The dense populations of Houston, Phoenix and Miami have been hard hit as young people went back to socializing up close and personal.

While more testing and yuppies being carefree have greatly contributed to the expected uptrend in Covid infections, there has been a less severe move up in corresponding fatalities. These hotspots are alarming to some, while others feel it’s an acceptable risk that warrants less severe social restrictions than in the first wave in March and April. Should more hotpsots appear and deaths rise as dramatically, then investors will increasingly price in reduced economic growth for the rest of the year.

Most economic reports still show the economy responding better than expected to the gradual business reopening process. With consumers unable to consume and most businesses closed, producers sold down inventories and halted production in March and April as the economy contracted at Depression era rates. New orders from China, who remain ahead of our Covid curve, and the partial normalization of work in the US in May have led to inventory restocking. While year over year numbers are still deeply negative, there has been a sharp rebound in activity that has helped boost equity market sentiment. 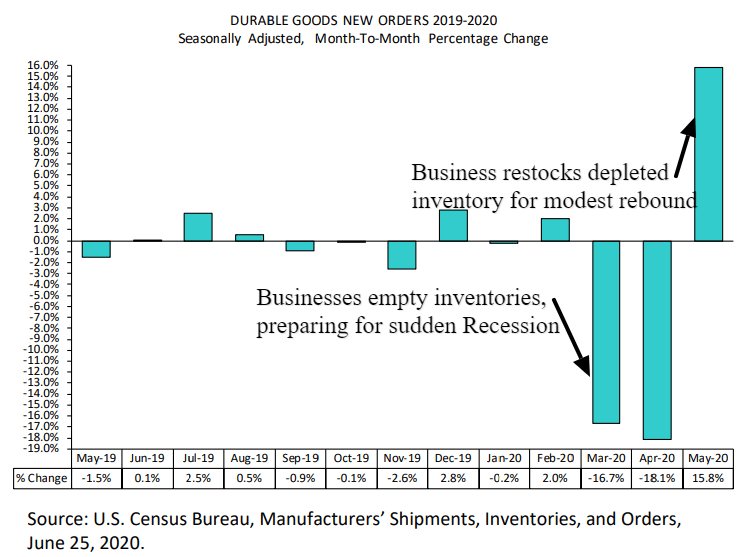 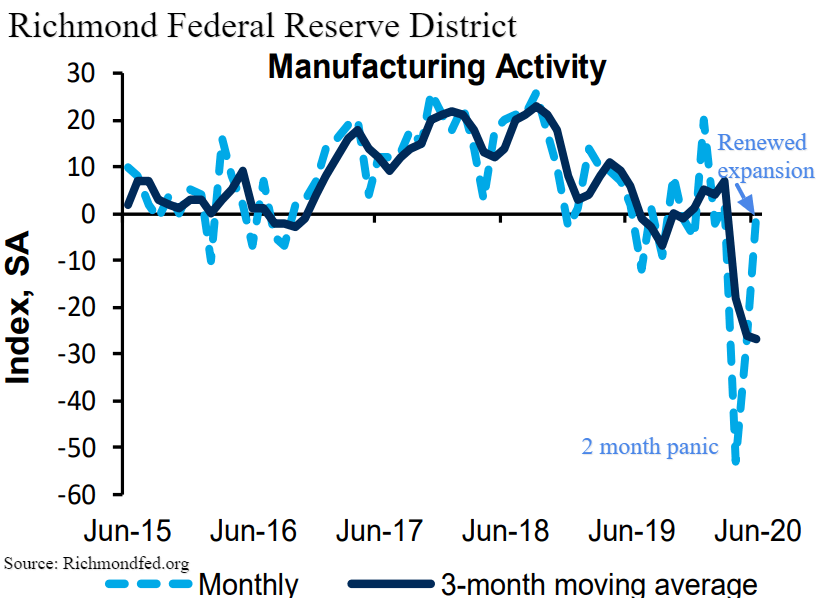 The Coronavirus hotspots, led by Texas, Florida and Arizona are moving the national level of COVID infections to new record daily highs. Apple has re-closed stores in 4 states, Texas and Florida are reinstating more social and business restrictions, Disney has postponed its Disneyland opening, and travel restrictions between States and countries are increasing. As of June 28th, 17 States are halting or reversing their social and economic reopening plans. It took weeks of bad data to halt the normalization progress and it will be weeks before States will feel comfortable getting back onto the opening up bandwagon.

However, our collective breaths may need a couple more weeks to understand if the sharp rise in Covid cases will reverse the amazing downtrend in deaths. With at risk seniors keeping their distance and treatments improving, its unlikely death rates will correlate as strongly as the first wave in March. Infections are also rising around the world though, so it’s logical that economic growth expectations everywhere have moved from better than forecast in April and May to worse than expected in June. Any reversal higher in Covid morbidity would impact stocks even more over the short term than the current 6% pullback over the past 3 weeks. After a 45% market rally in just over 10 weeks, a 6 to 8% correction is very modest.

Stock markets here and around the globe have been falling modestly in lockstep with the reversal higher in Covid fear perceptions. These trends typically remain in force for weeks, perpetrated by Government actions to slow opening the economy or even reversing back to a selective lockdown mode. The medical influence upon stocks can begin to reflect more Bullishly again when the rise in Covid cases flattens out and if it becomes confirmed that fatalities are not spiking in the current hotspots around the nation. Should the 2nd wave Covid fears continue higher, the path of least resistance will be lower for stock markets. It should be noted that the Covid deaths per capita in Texas are actually lower than vaunted Germany, which is a perspective lost on investors. 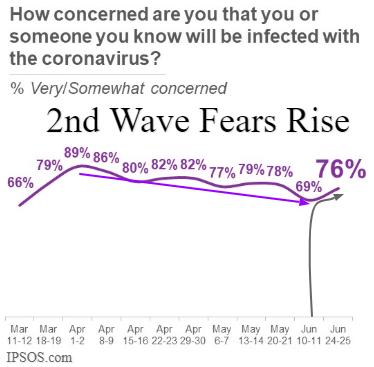 The fact that national daily deaths continue to fall and most hotspot infection locations are not showing a corresponding spike in fatalities, are major reasons equity markets haven’t collapsed after such a record breaking rally the past 3 months. Our primary stock market technical oscillators remain mixed with option trader sentiment coming off near record overbought levels in early June that coincided with the current Bull market top. However, investor survey pessimism keeps diving back to oversold readings every time stocks fall hard for a few days (light blue line below). Technically the late June to first half of July period could be yet another buying opportunity.