Waiting on the Corona Curve Collapse

After a month of social and economic lock-downs around the world, a few things have become clear. New COVID-19 cases must trend lower for a couple weeks before societal restrictions can begin subsiding. Once the Corona fires are under control short term, then its agreed we need widespread frequent testing and eventually treatments that prevent hospitalizations for COVID-19. Until such milestones arrive, Central Banks and Governments will continue bridging the gap by printing Trillions and sponsoring endless giveaway programs to tamp down panic and prevent a dystopian breakdown of society. With the US slightly behind the timeline of European countries it’s interesting to look at where various countries in Europe are on this curve, what measures they used in confronting COVID and how the US compares as we decide how safe it is to come out of our foxholes and invest in the future.

While strict economic shutdowns and social distancing are given credit for embarrassing virtually every medical modeler on the planet with their dire projections for the past month, a look at Denmark, Sweden and Switzerland provides some striking comparisons, despite vastly different approaches. Denmark, along with Austria and Germany, exhibited some of the best results in Europe in terms of fatalities versus their neighbors to the East and South. These three nations all utilized strict social distancing and shutting down of non-essential business with comparatively good results. France, Italy and Spain all had surprisingly scary fatality outcomes, despite stringent clampdowns and higher levels of viral testing than most. Clearly Denmark has fallen down the backside of its expected parabolic COVID curve and should start bottoming out in a week or two. Current fatality ratio is just 55 per million.

In stark contrast to Denmark and most of Europe, Sweden adopted the most relaxed effort in addressing this pandemic than any 1st world nation on the planet. While some Swedes chose to work more at home, mingle in more familiar circles and encouraged those over 70 to stay home, there was no strong efforts to battle this coronavirus. Sweden has been mocked for weeks that they would pay a painful price for ignoring vaunted distancing edicts. However, they appear fairly safe now and just a couple days behind other countries along the viral down-slope. With a fatality ratio of 132 per million to date, Sweden has fared worse than its northern neighbors, but better than most other countries in Europe that embraced far more alarm in addressing the pandemic.

The Swiss, on the other hand, did adopt stern measures like much of the world to battle the coronavirus and their viral curve peaked earlier than most. Yet their results were actually worse than Sweden thus far at 148 deaths per million. The Swiss did test vigorously relative to Sweden and most countries, yet their results were sub par. Looking at their progression down the curve provides a glimpse for the US as the Swiss now have a series of lower highs and lower lows in new cases, about 70% below peak levels.

Many ridiculed the US effort to battle this coronavirus, but the efforts and results seem to tell a more positive story. The fact that the US leads 1st world countries in COVID-19 cases and deaths is meaningless in that the US is the most populous 1st world nation on the planet (only data from 1st world countries should be deemed accurate). The US was the first country to close off flights from China, the first to shut off travel from Europe and the first to close its land borders, as well as the first to declare a state of emergency adopting a 6 to 8 week social and economic shutdown. While the US could be a week or so behind most of Europe, it appears the apex is passing here this week and a collapse to lower lows in new virus cases is needed to confirm a more confident downtrend. At 101 deaths per million, the US is actually exhibiting better results than over half of Europe: better than the Swiss and Swedes and far better than France, Italy and Spain. Even more interesting is that when one normalizes for the extreme anomaly of New York for other large metropolitan areas in the US, we would have a fatality rate in the 50’s per million, equal to the best countries in the world outside of South Korea. There should be a case study to understand how New York accounted for almost half of all fatalities in our country with only 5% of the population, despite herculean federal efforts that prevented ventilator and bed shortages. Outside of New York replicating the infamous Italian model of morbidity, the US is following similar COVID curve results of its best peers – so far. Looking back at Sweden and other countries it appears that social distancing and creating an instant global depression had a very modest effect on viral fatality rates. Perhaps there was a middle ground between adopting Sweden’s relaxed approach and those countries with more strict measures that have sent unemployment to record levels. If the net result of lives saved due to strict distancing efforts was modest, then a more relaxed approach may have saved lives in other areas that have been neglected and saved Trillions spent by nations to save us from an economic contraction they created.

Now that the COVID-19 curve is breaking down inexorably to safe levels over the next couple of weeks in the US and most of the globe, it’s time to plan on selectively getting back to work while our giant pharma industry breaks historical speed records providing testing and treatments to keep this coronaviurs from rising like a Phoenix next season. Germany and most of Northern Europe will start opening back up next week and the US will join the trend one to two weeks afterwards in various cool zones. With many counties throughout the nation never having a single reported case of COVID-19 and some states with small corona curves that have fallen to extremely safe levels, there is no reason strict rules for high risks zones need apply to ultra low risk areas. 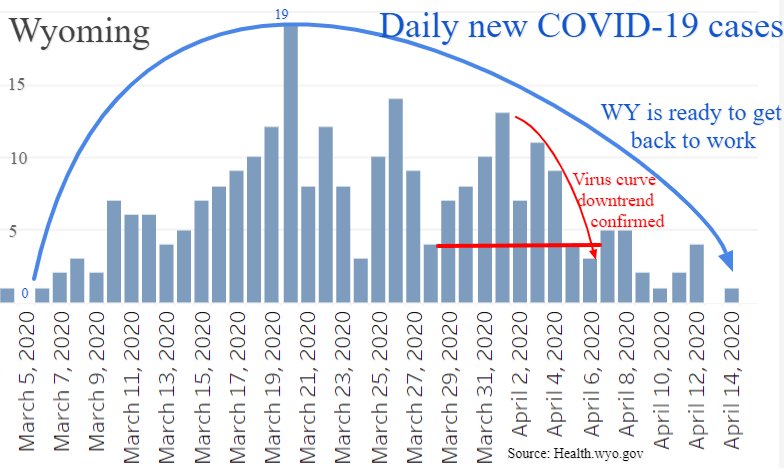 Stocks have soared on the rumors of the impending opening day for our economic recovery. The old adage we have been talking about in our updates has been to Buy the Rumor and Sell the News. When markets run up on expectations, they falter on reality as favorable outcomes become fully valued. As the economy actually starts opening up, workers will show up, but they will be very reluctant to go out and spend money afterwards to drive our dominant Service sector back up. China is a couple months ahead of the US and is still struggling to coax its dutiful citizens to consume. We expect to use this 2nd half of April to reduce stock market investments in favor of higher cash allocation for a pullback into May. While the top of the trading range we have outlined in the past extends to 3000 basis the June SP 500 Index, the 2880 to mid 2950, as illustrated below, should be hard to surpass. Any ~2 to 3% SP reversal from the April highs should confirm that the expected April top is behind us.