In 1609 a majority shareholder and competitor of the famous Dutch East India Company (controlled 50% of world trade in 1700’s), created a primitive Hedge Fund to sink its shares for profit. Isaac Le Maire invented the idea of selling shares short, borrowing shares using collateral, in the hope of delivering the shares back to its owners at a lower price and making money on the difference. With his 25% stake in the company plus other shareholders he controlled, along with Royal ties to competitors, it seemed like a sure thing. Unfortunately for him and his Hedge Fund cabal the Government intervened to disallow short selling, thus causing a massive financial failure of the Hedge Fund. To some degree this battle between short sellers and regulators has continued to this day and whenever there is an individual stock collapse (ie. Gamestop) or general market crash, like the Great Depression, short selling is often blamed as a factor. To be fair, the practice of selling short can provide liquidity and market efficiency in finding fair value and countering excess speculation. Hedge Funds, using other peoples money, have always dominated this shorting vehicle for their benefit. Mega Funds will never win a popularity contest, which was in evidence recently when millions cheered as Wall Street Bits created their own loose knit cabal to force Hedge Funds to painfully cover their shorts with huge losses.

During a major Bear market panic when financial downgrades proliferate, short selling rises. The bursting of the mortgage bubble in 2008 generated record short selling when it appeared we were entering a new Greater Depression. In massive equity Bull markets like today most of the short sellers get burned by persistently rising share values which sharply suppresses willingness to take on margin debt to sell shares short. In the past three decades there has only been one other time when short selling had fallen as much as it has today – late 1999 to early 2000. This highlights the current vulnerability from an empirical view. However, we need to fine tune this risk with the record stimulus of printed money already provided to the economy and the Trillions more that is likely being printed in coming weeks and months. Once the economy opens and fiscal stimulus faucet is shut off, equity prices will begin to struggle as too much of future earnings growth will have been priced into the market. 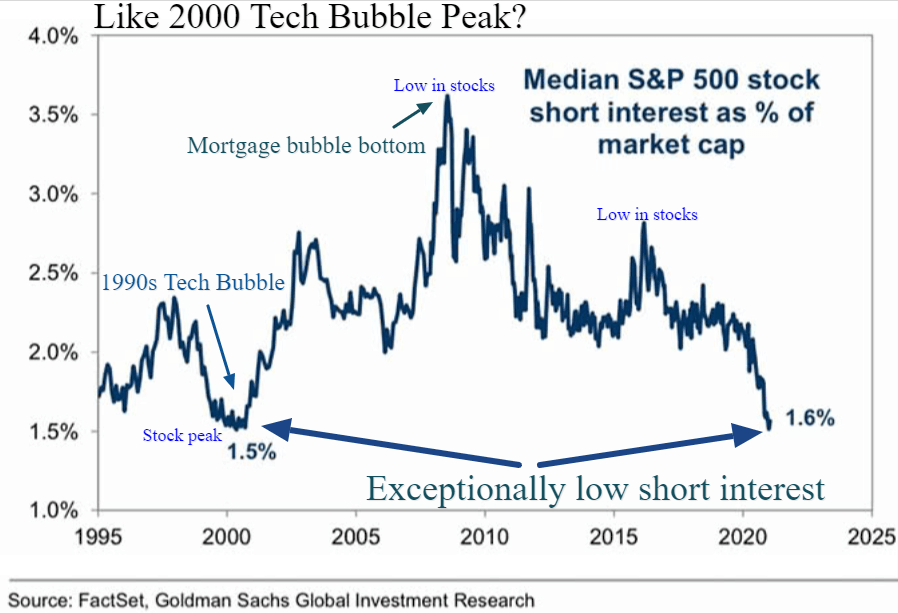 This excessive premium has generated some extreme volatility that also mirrors past periods of stock market excess. 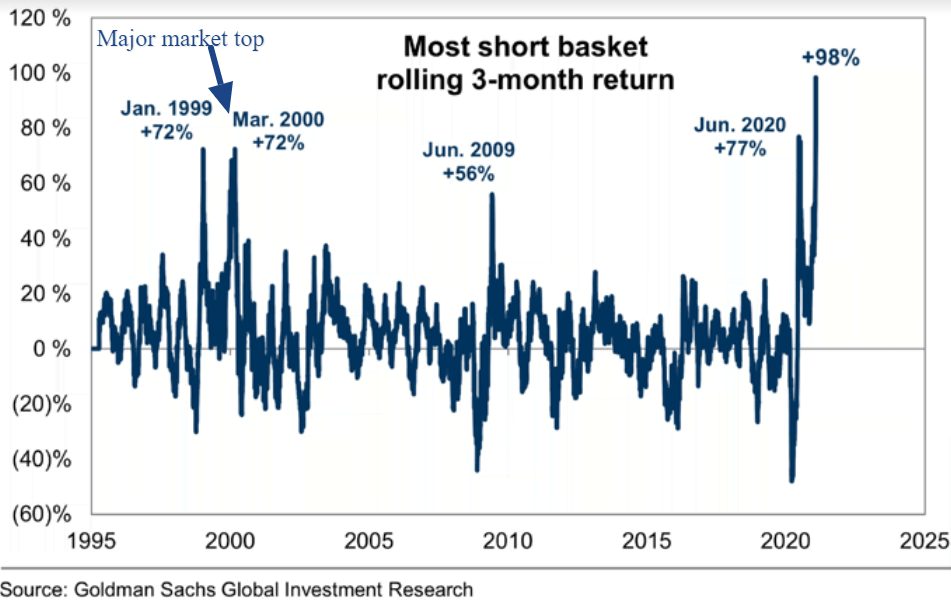 Can this continue despite these high risk comparisons? Total public debt in the US grew $4.5 Trillion in 2020 and will grow another $3 to 5 Trillion in 2021. Our country has become velocitized with less sensitivity and alarm about exponential debt stimulus growth. Modern monetary theory has quietly been adopted where printing digital money has no existential risk attached. With this much money flooding banks, consumers will keep consuming and investors will continue speculating in stocks as never before. Record funds flowed into stock portfolios in January with more handouts from Uncle Sam on the way. Our favorite adage of Buy the Rumor and Sell the News in a Bull market continues to apply here. The rumors of more stimulus and an economic resurgence post pandemic should maintain excessive premiums and optimism in equities. The gambling premium will come off stock prices when the Government casino is no longer politically palatable. We expect this forward discounting will stall the markets in Q2 as vaccine surpluses surge, hospitalizations collapse and the economy opens.  Official herd immunity (70%) isn’t required to resume economic and social mobility, but of course any new pandemic will simply generate yet more stimulus steroids to infinity until the economy can open up fully. 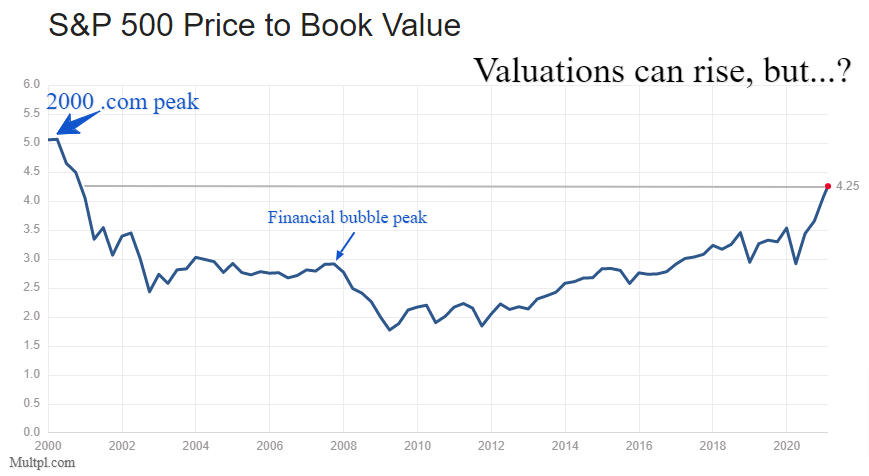 While this speculative investing and profligate spending can continue as long as the Fiscal and Monetary spigots are wide open, it’s worth noting the betting fever amongst option traders with 20 year record Bullish Call option optimism for higher stock prices. The party of late 1999 and early 200 was the only period that exceeds the current degree of optimism out there. 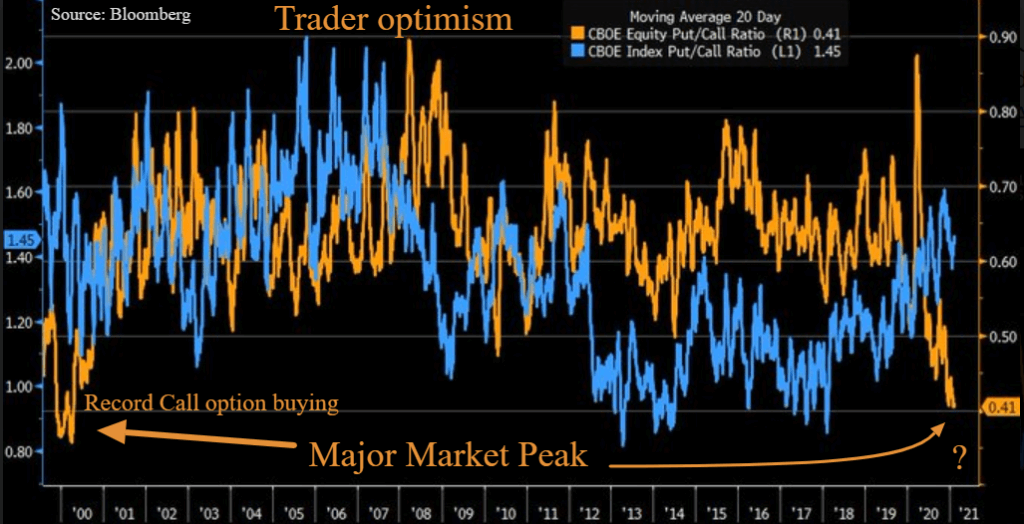 The same picture emerges using shorter term Equity Put to Call option ratios. The uptrend is building into a crescendo in the first half of 2021 with smaller and smaller corrections with so many buyers increasingly consumed by FOMO (Fear of Missing Out). With more stimulus packages certain to be passed for emergency Covid relief and then infrastructure (more stimulus) to the tune of $2 to 4 Trillion this year, the Buy the Rumor mania can persist. However, beware when the music stops playing for the reality check downshift in expectations which ultimately drive stock prices.

What Does It Meme?

What Does It Meme?
Ready to start creating financial success? START YOUR FREE TRIAL