Since the shortest Bear market ever transitioned into a record Bull market in March, there has been an insolvency impulse by small investors. Esurient equity buying behavior of pajama traders is being spurred by up to $5,000 a month of Unemployment and Care package money in the pockets of novice investors. Free trading platform Robin Hood and online discount brokers are all experiencing record trading volume. Half of the top 10 stock picks among Robin Hood traders have been companies that will remain 100% or partially shut down for months to come. According to Citadel Securities, stocks under $1 per share had an average gain of 79% over the past week. Beyond the risky bargain hunting of stocks with long term financial impairment, many have been amazed by the Bull Market in Bankruptcy stocks. The poster child for betting on bankruptcies is Hertz rent a car. They have been talking about wiping out shareholders since mid April and officially announced a Chapter 11 Bankruptcy filing in late May. Undeterred by such negative news, novice stock investors kicked off a 3 day rally sending Hertz up 1,462%. Legendary Billionaire investor Carl Icahn took a $1.8 Billion loss near the lows, knowing it was going to zero.  Apparently the unemployed mass of first time buyers are the real geniuses here with a new math to value such worthless companies. Moving back towards our reality over the past 2 days since Hertz rose like the Phoenix, the stock has since given back most of its gains and will likely be trading for just pennies again this summer.

Speaking of pennies, another iconic brand, JCPenney (JCP) has been heading toward bankruptcy for many years in the eyes of many.  Yet in mid May after they declared their stock would soon go to zero, pajama traders refused to accept reality and created their own universe. Since warning their stock will soon be worthless, JCP rallied 510% before losing most of that in the 2 day aftermath this week.

Chesapeake, Whiting Petroleum and other energy players devastated by the pandemic related glut of Oil supply have also joined the tsunami of failed companies. These publicly traded companies also felt the deranged wrath of low income casino patrons who feel stocks of bankrupt companies will miraculously reverse their Chapter 11 filings. Perhaps they don’t realize that common stockholders are last on a long list of investors that will carve up these failed assets, leaving them in the digital dust. If these gamblers were nimble day traders, then they made out better than the pros. 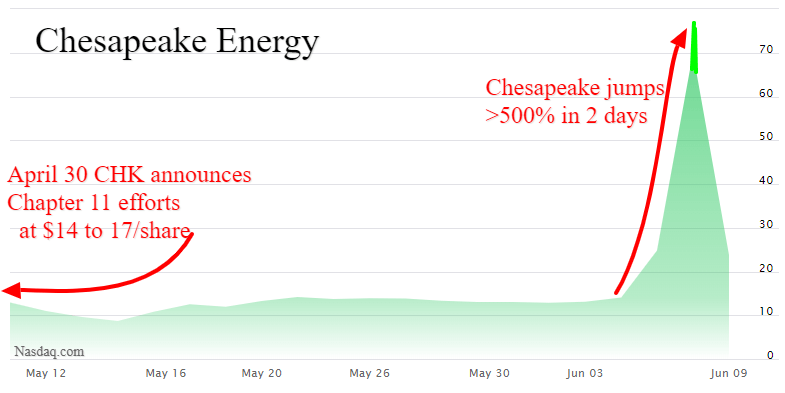 One more ‘greater fools’ example is another household name of yesteryear that hired bankruptcy lawyers in April, but has not officially filed Chapter 11. AMC theaters, like most US cinema companies have struggled for years. Its dire destiny has recently been compounded by the Covid quarantine which elevated the trend of streaming services at home. The odds are AMC will seek Ch 11 protection soon, but even a stealth survival this year would likely be a temporary reprieve from an official dissolution someday. TV and Movie streaming at home are here to stay and was already accelerating rapidly before the stay at home economy was mandated by the pandemic. AMC has rallied 250%, back to pre-Covid levels since Bankruptcy talk was announced, thanks to low income gamblers missing their local Casino. However, suppliers to a dedicated home viewing space will be a far better investment than AMC in the future. 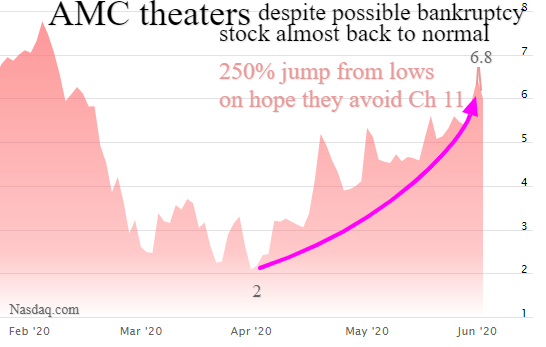 Robin Hood traders also have a penchant for Airline and Cruise Line stocks that should avoid Bankruptcy, yet balance sheet impairment make these overbought sectors risky until the economic recovery has the prospect of a Covid free travel. In a cynical salute to neophyte investors making hey with their Government handouts, they seem to have fared better than the most renowned wealth managers and professionals who all forecast new lows or a very deep retest for the past 11 weeks. If the froth keeps coming off this group of Bankruptcy Bull market stocks in June, then we may finally witness an overdue pullback now into July worthy of significant new investments in this early innings of a secular equity uptrend.

Best Job Gains Ever on 10 Million Miss in Unemployment