Has inflation peaked? According to a leading inflation index indicator measuring a basket of raw commodities, a clear top of some degree has arrived in June. With all the consternation over inflation and interest rate hikes, it is no coincidence that the low of the year in stocks (so far) has coincided with short-term commodity deflation. A Monday morning quarterback would say the Fed should have begun modest rate hikes in late 2021 when it became obvious that the economy was strong and inflation was exploding. The pro-growth Fed got this one wrong, as we have been hearing for almost a year now by most economists. The good news is that markets anticipate consequences of Fed actions in the future which caused free market interest rates to surge since last September with Mortgage rates more than doubling, even though the Fed was stuck in its Monetary Metaverse in full stimulation mode. With the commodity deflation and the ebbing of energy and crop prices specifically, interest rates are now falling despite the certainty of more Fed rate hikes ahead. This is good news for stocks for at least a nice rally in what could still be a Bear market. Some of this commodity deflation in June is China centric due to their failed Covid lockdowns which may reverse later this summer. For now however, this is a plus for inflation watchers worried about Recession level credit tightening by our Central bank. 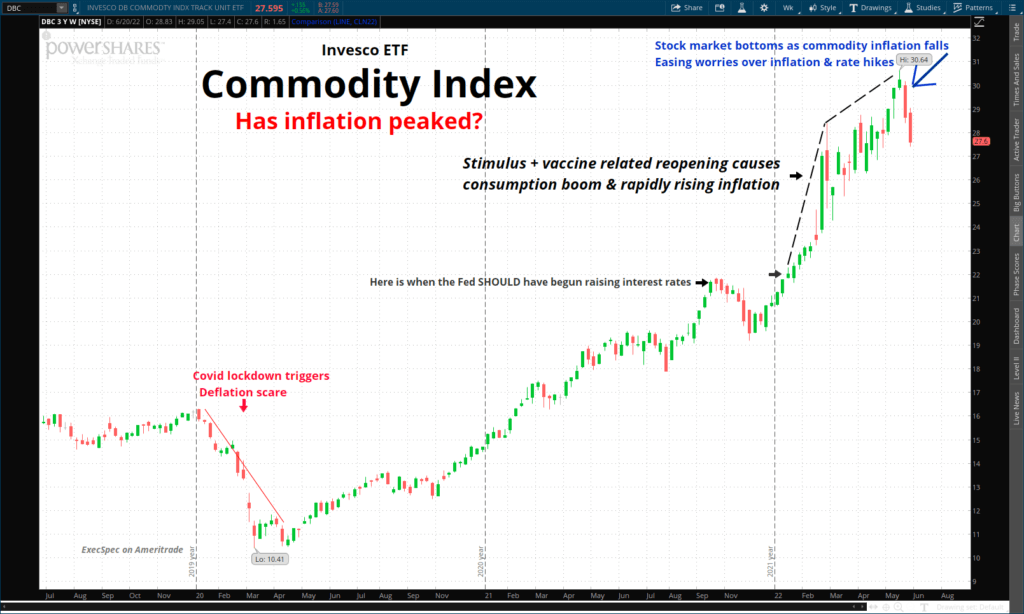 A short-term view of our Daily stock market chart reveals how well Seasonal patterns have guided this Bear market lower. In a recent interview by the Fnancial Sense Newshour (financialsense.com) in early June, we were looking for new Bear market lows later in the year, but felt that June, July and possibly August would see a relief rally for investors to trade and use to raise cash. The June decline was deeper than we originally expected from a short-term perspective due to the market repricing of equity multiples after the fed’s aggressive 75 basis point rate hike. Since that 6 day reprising plunge ended, stock indices have risen 6 to 7%. Today we are popping into the lower portion of our first resistance window from which to expect a pause before a further rally in July.

Prior to the Fed’s 75-point fed funds rate hike, our panel of indicators reached historic oversold levels on May 20th that normally would have marked a major low in stock indices. The June rate hike by the Fed triggered a panic drop in prices which once again sent our indicators in to the deep oversold zone. Our price pattern proxy for this Bear market had been expecting a mid-May to mid-June low followed by a 7-to-10-week rally phase before market turmoil returns. Should our indicators approach overbought conditions during an expected July – August peak, we will advise more aggressive position selling to become more defensive. Investors should expect to hear more advisors switching from entrenched Bears to emerging Bulls later this summer, assuming this rally continues.

Trailing earnings and guidance have been very strong over the past 2 years. However, forward earnings estimates are now falling sharply, down to a 16 price to earnings ratio. This is finally bringing valuation multiples down toward our targeted healthy levels in the low to mid-teens. Since we are a long way from a true Recession where unemployment rises and inventory gluts are common, it will take a lengthy period of weakness and possibly a several negative GDP quarters and prolonged Recession rhetoric, before the market can cement an important bottom. Once inflation falls and the market can anticipate when the Fed will begin future monetary easing, then stocks will accelerate higher as part of a new Bull market in 2023.

When Will Inflation Fighting Fed Worry About Recession