With estimated April unemployment already within marching distance of the dire Great Depression levels of the 1930’s, the stock market seems obtuse to have recouped most of its losses for 2020. As a leading indicator, stocks appear to foresee a partial V shaped economic recovery over the next year. March was one of the worst months in the markets since the 1930’s and April was one of the best months since the 1980’s. The tech savvy Nasdaq has actually moved into positive territory for the year to date. Tech stocks are indeed exhibiting excellent revenue growth and forward guidance as the digital replaces the physical, but many worry that the face to face Service Sector, accounting for 70% of our economy, is in the process of losing thousands of businesses to bankruptcy.  Clearly the financial world is looking beyond the cratering economy (GDP) toward a slow but renewed expansion cycle.

It may not matter if our Unemployment rate surpasses peak rates of the Great Depression and our GDP contracts faster than the 1930’s, as long as its brief. Based upon today’s ADP payroll report showing over a 20 Million reduction in employment for April, we would estimate a 16 to 17% Unemployment rate currently. The official April Unemployment number due out May 8th is based upon a mid-April phone survey that may understate the labor force panic, but investors already know it will be bad and feel those headlines have already been archived. Investors are looking beyond the valley of despair toward an economy opening earlier than expected and mortality rates falling faster than models had projected.

SHRM (Society for Human Resource Management) survey report today of 375 small businesses indicate that 52% expect to be out of business within six months. With a record shattering 30+Million filing an initial claim for unemployment over the past 7 weeks, this dour SHRM small business expectations poll hints that more layoffs are coming. While 16 to 17% may be closer to the official Unemployment rate today, the initial claims trend presents the possibility that Unemployment will soon test the worst levels estimated at the nadir of the 1930’s Depression (20 to 25%). This time however, their are enormous Government safety nets to cushion the blow. We already see signs of rehiring taking place in States that are partially opening up in May. Even in some States still in lockdown we have listened in on Board calls that indicate stores, wineries, B&B’s and rural resorts are rehiring for anticipated May/June reopenings. Unemployment may continue to scary levels 20% or slightly beyond, but don’t be surprised if rehiring of workers increases faster than many expect.

While the Chinese Government lacks Global trust, verifiable consumer activity data reveals a significant rebound underway, though still 20% below normal. US investors are hoping for a similar journey for the US consumer that appears to be almost 3 months behind the Chinese model. While much of the Chinese improvement was initially due to a normalized vehicle traffic activity, we suspect the different activity components in the US data to exhibit a more sluggish improvement, but the path will be upward in our opinion. The first clues for improving US consumer sentiment will come from traffic congestion metrics and as of today they have barely budged from their lockdown lows, even in states that are leading the nation in reopening their local economies this week. There is no doubt that hundreds of small restaurants and shops will not come back and consumers will not consume with the same sized wallet as last year, but for now its more about the steady improvement in numbers as the US and European economies open up piecemeal over the next couple of months. If we follow the China model to some degree, we should see a great deal more optimism by August, even without a COVID cure. 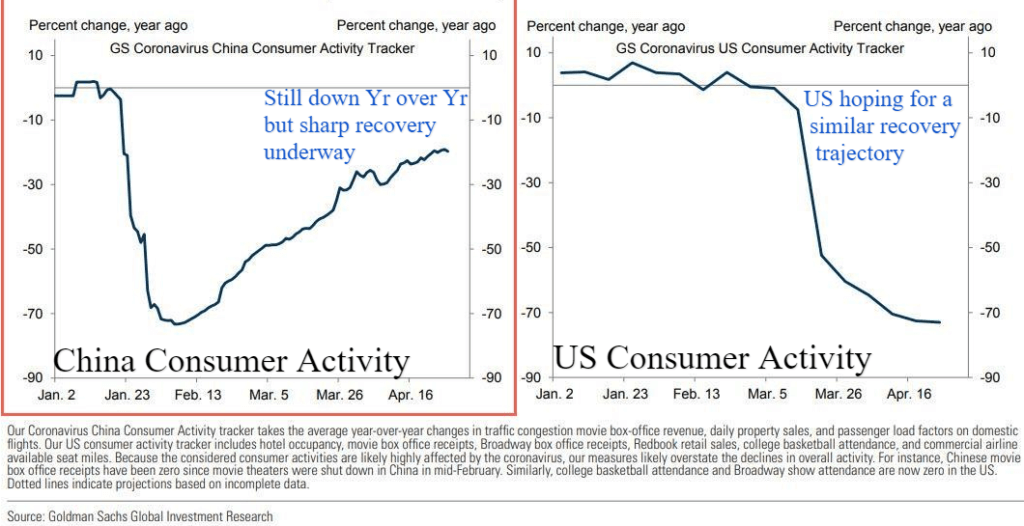 Virus curves always have a bell shaped path of accelerating infections and fatalities, followed by a plateau and then a downslope that leads to a virtual cessation of mortality risk until the next Virus season begins. New York has been the unfortunate poster kids of a tragically exaggerated viral curve in part due to having the most dense population in the country. NYC appears to be leading the country down the COVID curve. With improving death numbers nationally since early April, after a series of massive monetary and fiscal  stimulus efforts, investors have been increasingly willing to overlook the current economic conditions staying focused optimistically about the future. 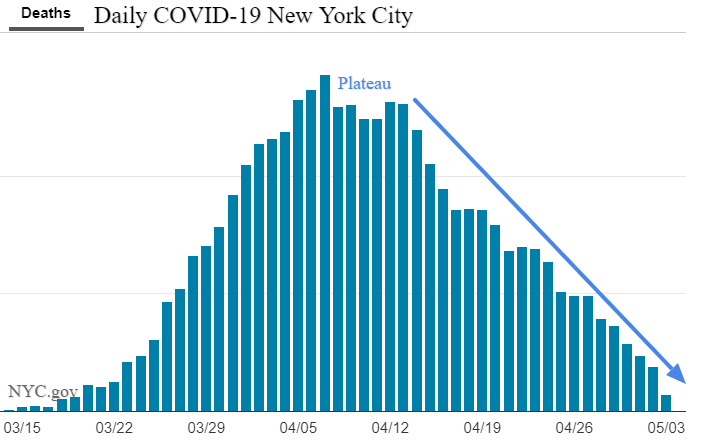 The most severely afflicted areas of the country are leading our COVID curve lower and the overall improvement in the country as a whole is following more gradually with a series of lower lows and lower highs in fatality data. While virtually all models have grossly overestimated the COVID mortality trends and timing to date, the current consensus projects a relative disappearance of Virus fatalities between the end of June and the end of August (we would bet on earlier than later). 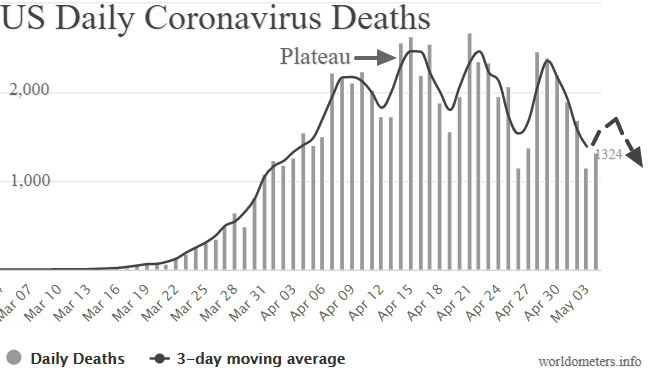 There is no crystal Ball that indicates there will be no Corona cure for years or that the global economy will avoid another lockdown, but the War footing focus of Public and Private sectors with unlimited funding being brought to bear for this singular cause, fortifies our view that there will be medical breakthroughs faster than previously thought possible. The strong 35% rally in the US stock market from its March 23rd low to the April 29th high is not a sustainable trend, but it’s indicative of an economic recovery phase that is barley in the first inning. Once the summer months begin and the economy is mostly open for business, we suspect more of a trading range equity environment awaiting the COVID cure or any treatment that removes the fear of being hospitalized. With the very strong Cruise ship bookings next year, a pent up energy to socialize and consume, as well as massive stimulus in the pipeline, hints that an effective Virus treatment will boost equity market valuations to record highs soon after a cure arrives and the fear phase ends.