Government Stimulus for Nothing, Debt for Free ?

It’s an old political game: never let a good crisis go to waste. Under the guise of desperate times require desperate measures, politicians use every financial crisis to create costly spending programs lasting for years beyond the crisis. Both parties use the power of the Government purse in every Recession. It’s fair to argue that a mandated closure of the economy requires emergency actions to prevent a spiraling panic by backstopping the banking system until the post panic recovery can begin. The Covid crisis required some income replacement money and support for pharma to speed a vaccine recovery and minimize the damage. However, even after the clouds had parted with the warp speed immunization of America and the start of an economic boom, the political machine had its own warp speed effort to spend as much as possible for as long as possible before the end of the Covid crisis became obvious. Political leaders know they can’t pass “any” stimulus once the economy has entered a self sustaining boom.  The current rush is to spend now and tax later – to pay for the spending that wasn’t necessary. In 2021, its the Covid cure that is triggering a strong GDP rebound. The massive stimulus bills in December and March and proposed infrastructure stimulus are just adding  jet fuel to a massive bonfire that was already preordained thanks to Pfizer and Moderna, not our political leaders. The Biden Covid crisis legislation is about wealth redistribution. The Trump crisis of 2017 was about tax cuts, catering to his shrink the Government agenda. Clinton, Reagan and FDR all had their populist impulses to legislate political party agendas as well. The $2.3 Trillion deficit in 2020 was unprecedented and justifiable to a large degree. The $3.4 Trillion deficit estimated for 2021, with near record job openings, is audacious political gamesmanship at its finest. 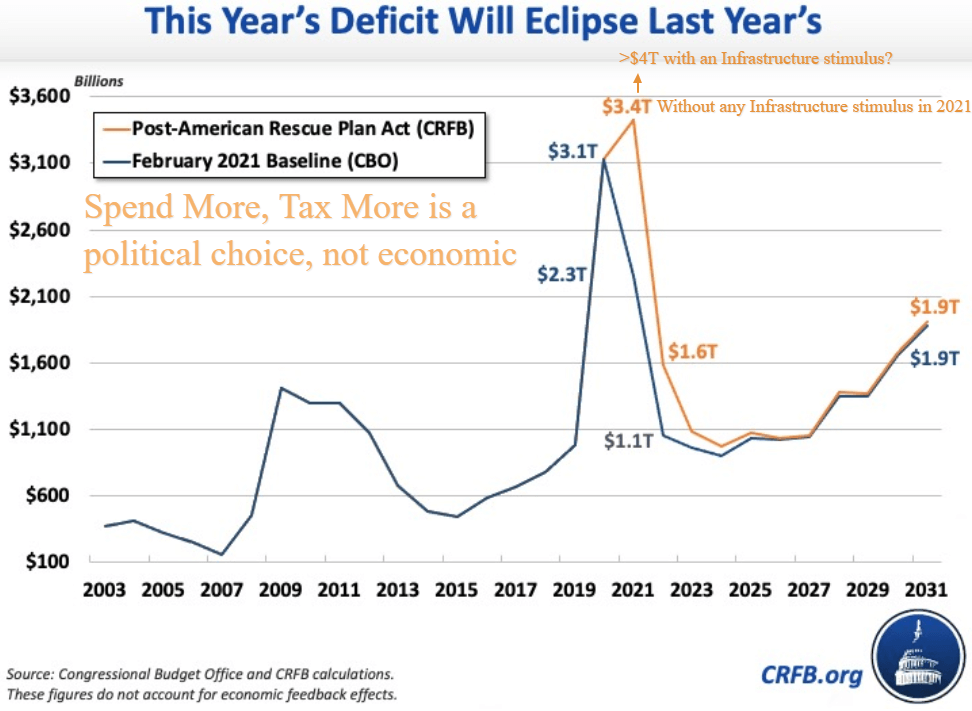 Free stuff for everyone during a crisis is fun for politicians who can promise money for nothing and debt for free, while blaming the current crisis on others. In the era of quantitative easing (QE) since the Great Financial Recession of 2008, the US led the world on a new path of being the seller and buyer of their own debt to create spending of dollars out of thin air. Deficits of a few Billion dollars were of considerable concern in the 1970’s, but worry over how we pay for Trillion dollar deficits as far as the eye can see barely causes a ripple today. The Government bought almost 30% of its own debt in the previous QE’s of 2008 to 2014. The current QE infinity wave during Covid has the the quasi Government run Federal Reserve buying half of the Treasury debt the Government is issuing. Higher taxes may be desired for sound fiscal budgeting and narrowing the wealth gap. However, in the era of specious Modern Monetary Theory (MMT) that became policy in 2008, the US no longer relies upon cutting spending or increasing taxation to pay for deficit spending when digitally printing of money can suffice. The mantra of raising taxes on those that benefit most from the stimulus is more about furthering a political agenda than responsible budgeting and fair tax codes.

Just a few years ago economists lamented that the US total public debt had surpassed $20 Trillion. It appears now that a $30+ Trillion debt handle is attainable in 2021 (>130% debt to GDP ratio). Longer term this is deflationary, robbing from future growth, but this year we will feel an inflation spike and higher interest rates.  Forward looking stock investors have made their easy money this past year throwing darts at a list of stocks, but they will begin to struggle in the year to come as positive year over year comparisons narrow and credit costs surge. The transition to laggard sectors in emerging markets and more high yielding Utility companies should garner more investment dollars as we move into the back half of 2021. The short term risk continues to be a spike in interest rates and or a new vaccine proof Covid variant making its way into the US and Europe. While market corrections should remain temporary affairs in this ongoing Bull market, the next seasonal risk for an equity pullback low is during May and June.