Carrying on the tradition of all politicians, President Biden this week extolled the virtues of the strong jobs report, falling deficits and peaking inflation. Understandably, the stock market is loving the news today of a small drop in year over year headline CPI inflation from 9% to 8.5%, but let’s review the Administration’s victory laps and political spin regarding our economy.

The high but falling inflation data provided cover for an artfully named $740 billion Inflation Reduction Act this week. Biden’s daedal effort to connect this large spending package to the chimerical title of “inflation reduction”, obfuscates the front-loaded inflationary stimulus portion of the bill during his presidency and the disinflationary deficit reduction portion that arrives in 5 to 6 years, should anyone notice. Two hundred and thirty economists joined a letter to the Senate in opposition, claiming that it would be inflationary. Along with the recent Chips Act, these hefty trillion fiscal stimulus Acts will make the Fed’s job that much harder as they deal with a 40 year high in consumer prices (CPI). Fortunately, inflation was peaking in March and will continue falling over the next year due to Fed credit tightening. despite the inflationary politics. Our personal operations in the international machine tool sector is evidence of a need for “less” Government spending to boost the economy. It may seem counterintuitive, but we are experiencing record orders without much growth due to a parts shortage from our supply constrained economy.  This restrains shipments to our customers and keeps the backlogs growing. Adding more fuel to the economy will only hurt our performance, while a slower economy will allow key components to arrive on time with less cost.

A better example is that as of the end of June, GM had 95,000 vehicles sitting in mega parking lots awaiting chips and a Free Press report from insiders in August hint that this problem is still growing at many facilities. At some point, manufacturers can’t keep adding to unfinished inventories, despite an imperative to keep their thin labor force on the job. A lessening of demand throughout the economy will ease the pressure on semi-conductor chip supplies from Taiwan and allow just-in-time supplies to reach more factories. Let’s hope there is no Chinese blockade of Taiwan (it’s likely at some point). The last thing we need is more interruptions from China or from US helicopter stimulus money slowing supply chain shipments, reducing margins and keeping inflation elevated. The recent report of the Adobe Digital Price Index reveals E-commerce is actually deflating on a year over year basis for the first time since 2020. This is a good sign that the worst is behind us. We do believe core inflation peaked in Q1 and is rolling over, but the current Government spending bills will keep interest rates and inflation higher than they otherwise would be. Once the Fed’s inflation measure of core PCE falls under 4%, (4.8% currently) they will likely take a pause on rate hikes. For now, market rates will be range bound while the Fed will continue hiking the Fed Funds rate through year end towards 3.75%, in our opinion. 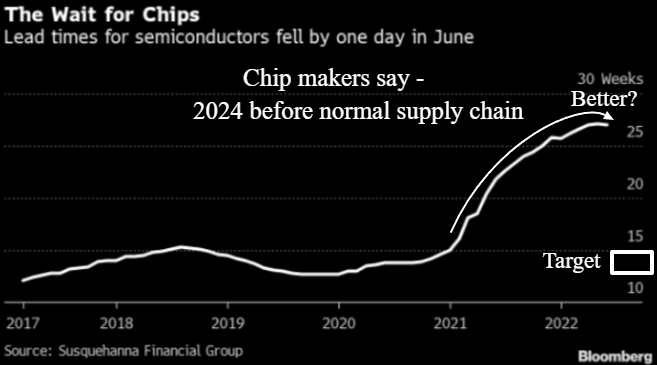 Jobs hyperbole: As we have illustrated in past reports, Presidents are prone to hype and spin regarding economic data as they message for a popularity contest throughout their term in office. Trump always reminded us of how he presided over the strongest economy ever with record job creation. Fact is, Trump presided over a good economy with full employment for most of his 3 years prior to Covid, but far from record job creation or economic growth that he implied. Last week, Biden told the nation several times that he created jobs faster than anyone in history. His specious claim of creating 10 million jobs in 18 months lacks context. First of all, using his cherry-picked math, this was not a record since 12.5 million jobs were created under Trump during his final nine months in office. That was two and a half times Biden’s record pace, yet neither deserves bragging rights during Covid. After March 2020, Government mandates regarding Covid resulted in temporarily idling 22 million jobs. Thus, it’s not really much of a feat to let the economy open back up and bring all 22 million jobs back after 28 months while adding $7 trillion to our federal debt. Since the workforce is always expanding with population growth trends, we are likely still 3 to 5 million workers below where US employment would have been had the pandemic been avoided. Job growth is indeed strong, but throwing so much fiscal and monetary stimulus at an aging workforce has accelerated retirement and discouraged marginal workers that don’t have to work from reentering the labor pool. It would be a healthier jobs market if the economy continued to slow enough to lower job openings by about 3 million workers to levels of past economic cycle peaks of just 7 million job openings.

Debt hyperbole: Trump is blamed for increasing our public debt by just under $8 trillion. It was an astounding record, although most of that was accounted for by the mandated Covid lockdown and resulting income replacement stimulus funding during 2020. President Biden ridiculed Trump’s Covid related debt, which was essentially duplicated by every leader of the free world. Biden proudly told the country he had since lowered the deficit when the economy opened back up by a record amount, while actually adding almost $3 trillion to our national debt. Most individuals confuse debts and deficits. Over $2 trillion of Biden’s debt was added in just the last two quarters through Q1 2022 when the economy was severely overheating. Naturally the year over year deficit would tend to shrink as the economy exits the 2020 recession and pandemic, barring an outsized stimulus. However, with new Government spending packages this week totaling almost $1 trillion, it seems likely that our public debt will continue to grow faster than the economy for the foreseeable future.

In a world of Modern Monetary Theory where money is printed out of thin air by the trillions without apparent near-term consequence, it will take an alternative currency or exogenous panic large enough for which helicopter money will not satisfy before the debt bubble collapses. For now, the music plays for the only game in town. As long as the rest of the world subscribes to the same theory, then our currency can stay relatively strong and remain the cleanest of the dirty shirts 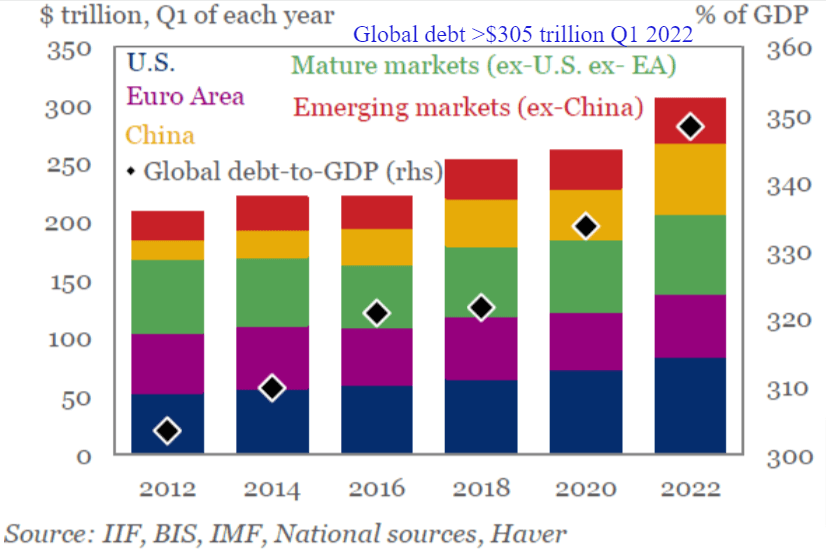 Every President tries to pass their most unpopular, most expensive legislation during their first two years in office, which is why we have clear Presidential seasonalities in the stock market. With a normal economic cycle due to bottom in the 2nd half of 2023 and significant restraint required to normalize inflation over the next year, we suspect the stock market will form a large trading range bottom over the next few quarters before embarking on a more sustained new Bull market in 2023. Our call for a June low and rally into the 4000 – 4300+ range in August has now taken place, as past reports have forecasted. The current 8 week rally off the 2022 Bear market lows has retraced almost 40 to 50% of the Nasdaq and SP 500 Indices respectively. While time is running out in our expected summer rally peak (mid-August – early September), the 200-day moving average and 61.8% Fibonacci retracement are becoming more of a magnet to watch for should this rally continue. Only a couple of our many indicators are even approaching short term overbought zones, where odds of a deeper correction grow, thus we will be patient about raising too much cash and hedging longs until more time and more indications show that the market needs to correct. We would extend our 4200’s upside potential for the SP 500 Index to as high as 4370 (~4% upside) at this time.