Will Inflation Return After Covid?

The Inflationary 1970’s was one of the more profound periods in our modern economic history. Leaving the Gold standard in 1971 to prevent a run on our gold supply triggered double digit inflation and tainted the textbook understanding of  debt and money supply upon inflation. The surging consumer prices in the 1970’s was a one time adjustment to the introduction of a floating currency system that forced an artificially overvalued US Dollar to depreciate to free market values relative to our major trading partners. Our banking system is dominated by Irving Fisher monetarists  who have spent far too much effort in recent decades worrying about a return of runaway inflation. Even when forced to inflate the money supply 600+% over the past 12 years, inflation has remained well below 2% on average. Only recently has our monetary chief, Fed Chair Powell, implied the Fed has been wrong to assume for years that high inflation would return if they kept interest rates low and pumped the nations money supply quickly. The ubiquitous Fisher monetary equation embraced by our financial leaders where money supply x velocity of transactions = price/transaction x goods/service transactions is not a forecasting tool yet it and the Taylor Rule have fostered erroneous policy forecasts. Our Fed now says they may keep interest rates near zero for several years or longer to get inflation above 2% with full employment. This is an enormously stimulative Fed put option for stocks and the economy. As shown here, the European Central Bank has been in lockstep with our Fed money printing party, flooding their banking system with an artificially elevated money supply, but minimal effect on inflation. The Sisyphean inflation efforts by all Central Banks from 2008 to the present have merely served to replace the secular deflationary contraction in consumption from retiring Boomers and slowing population among 1st world countries. Assuming an open economy in a  post Covid 2021/2022, a return to normal low inflation, after a brief supply chain spike, is inevitable. However, a high inflation rate on a sustained basis is unlikely. Rising debt and money supply may intuitively sound  inflationary, but are actually more often Government responses to prevent a deflationary panic.

One simple chart (below) tells a compelling story of secular disinflation that most economists ignored for the past 40 years. The 30 Year Treasury Bond is less influenced by Fed manipulations of money creation and has shown steadily rising Bond prices and falling yields that imply there has been NO inflation worries since 1981. In fact, each time there is a brief spike in Bond prices (falling yields), the free market enters a panic mode worrying that a deflationary Recession is beginning. Until our leaders make a mistake and allow massive debt defaults, it’s unlikely that high inflation will return. For now, the ever rising debt levels and printing of trillions in new money are essentially borrowing from the future to make up for the demographic consumption shortfalls of the present in an effort to avoid Recession. This chart shows the quick parabolic rise in Bond prices in March as borrowing rates fell toward zero when the pandemic lockdown hit. Financial markets know that global central banks will push every yield maturity to a negative yield – paying the borrower – if they have to in order to stave off the next contraction. Someday it may not be enough, but for now it’s the only game in town and no-one should bet against the Fed’s infinite money creation super computer. Rising debt and money supply is not typically a sign of future inflation, but more a signal of  Recessionary deflation concerns. It’s when the money supply shrinks and interest rates trend higher long term that we should worry most about inflation.

During the global economic pandemic lockdown in March the Global Central Banks printing presses were quite successful in reigniting confidence that the financial system was not at risk and that the economy would not contract any further. Global Steel producers have begun restocking as pent up demand for housing and autos return. Our personal exposure to the private manufacturing sector is witnessing some increased activity, but capital expenditures are still months away from the start of their typical 18 to 24 month up cycle we have experienced in past cycles. 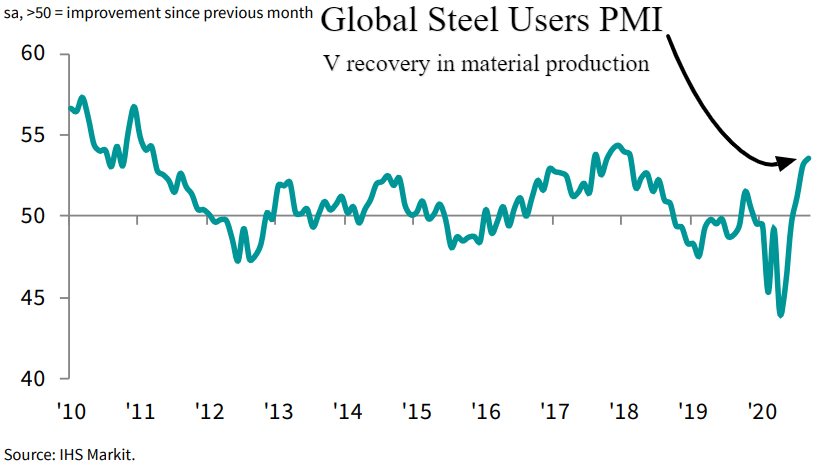 All the base metals are seeing increased demand and higher prices. Copper prices and producer optimism is at multi-year highs in the very early innings of this global economic recovery. As in the initial recovery phase after the 2008 global mortgage meltdown, metals and producer material prices should surge above trend medium term as the fear of Covid is subdued. However, when employment levels and supply chains are reconstituted, producer price inflation will normalize. Precious metals should go along for the ride with industrial metals until the economy is fully open, which is normal during the first year of recovery from a Recession. 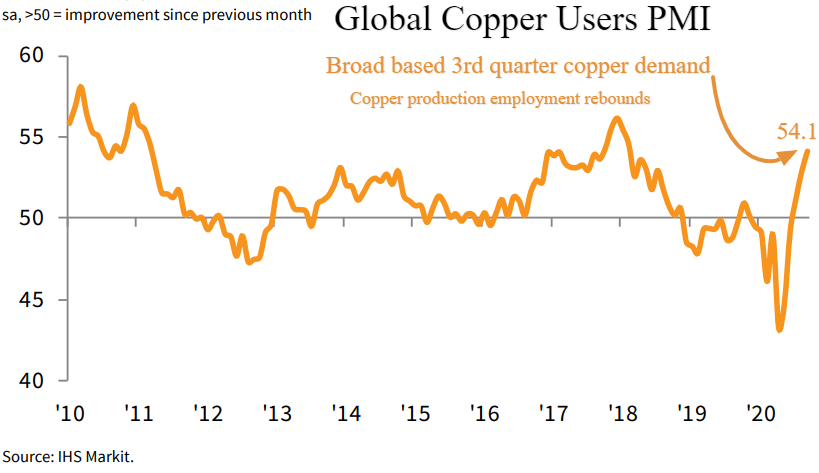 As industrial restocking and new orders rise we would expect infrastructure stocks to outperform the broader stock market. Soon after the market nadir in early 2009 infrastructure stocks embarked on a 2 year rebound outpacing the broader market. While Covid is ongoing, this rebound may be more muddled than normal, but investment dollars will increasingly flood this zone on the near certainty that a continued recovery and Covid free economy is around the corner. Caterpillar, Boeing, Summit Materials, Berkshire and Nucor are some classic plays in this sector. 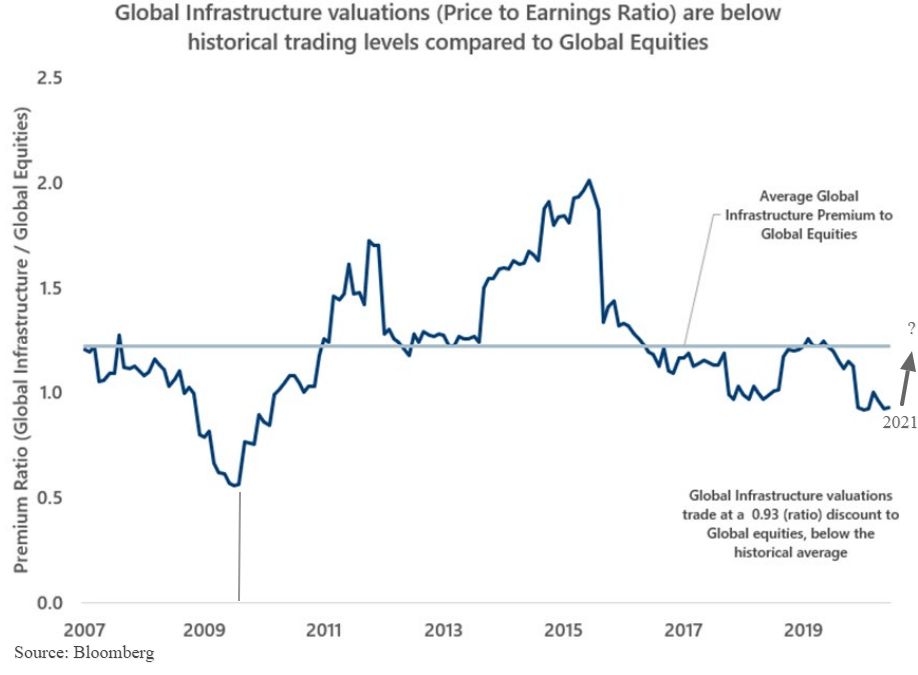 While travel and leisure remain in a  severe Recession with air travel down over 60% and many urban restaurants and stores closed or on the brink, the broader economy is still surging as evidenced by the NFIB survey of small businesses. Overall small business sentiment is back to pre-Covid levels and employer optimism in hiring more workers is at the highest levels since early 2018. When a fully open post Covid economy arrives we would expect that the biggest hurdle for businesses will be the struggle to find labor to meet demand, despite the current 8% unemployment rate. It may take another year or so to take down the negative health and economy headlines, but the underlying economy and earnings will keep beating expectations, thanks to the kindness of strangers at the Fed. 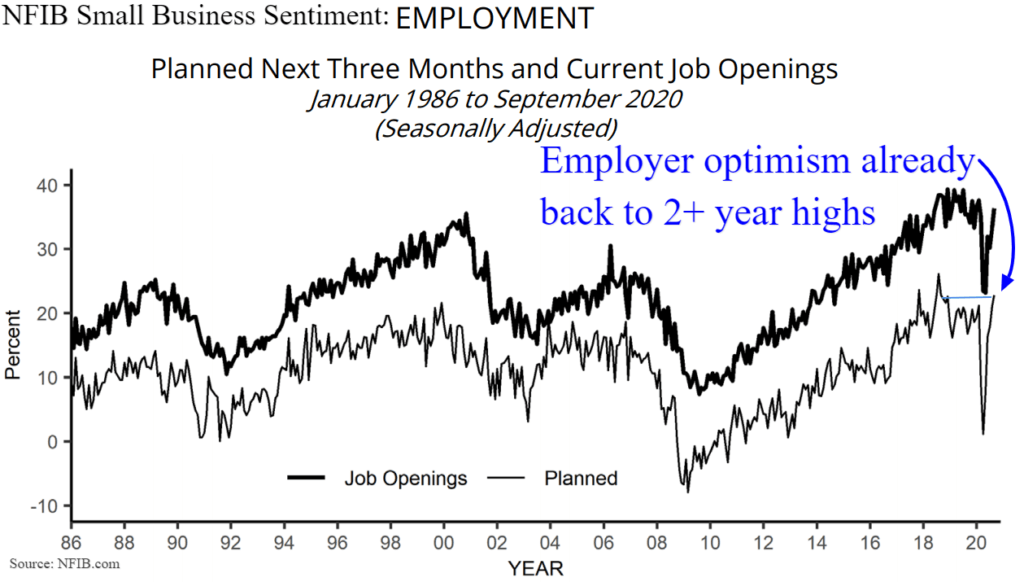 Headlines of scandals, virus spikes, tax selling and business closures may cause a short term stumble at some point in the next few months after such an unrelenting appreciation in the economy and equity prices. However, regardless of the 2020 election outcome, we expect the stock market rally and the GDP to continue higher in a broadening formation in 2021.

Mail in Mayhem Could Offer Buy the Dip Moment