Mail in Mayhem Could Offer Buy the Dip Moment

Only twice in the past 92 years have we had stock market gains in the 3 months prior to the Presidential election where the incumbent party lost. Given the Black Swan event of a pandemic and an estimated 50 Million+ mail in ballots and early voting likely, our confidence levels of the Presidential outcome are murky at best. The post election stock market reaction is also full of unpredictable variables. Will the early voting increase Biden voter turnout? Will the example of 20% mail in ballot rejection rates in the Primaries apply to the Presidential election? Will the FBI or credible authority complete our expected October surprise by expressing concern over the Hunter Biden emails? Will the election be close enough to warrant a contentious journey to the Supreme Court? Perhaps the results will be lopsided enough for quick results without a serious challenge. If we witness another hanging chad event like Gore v Bush in 2000, then an excuse for lower stocks of > 10% would be likely until an election can be confirmed. 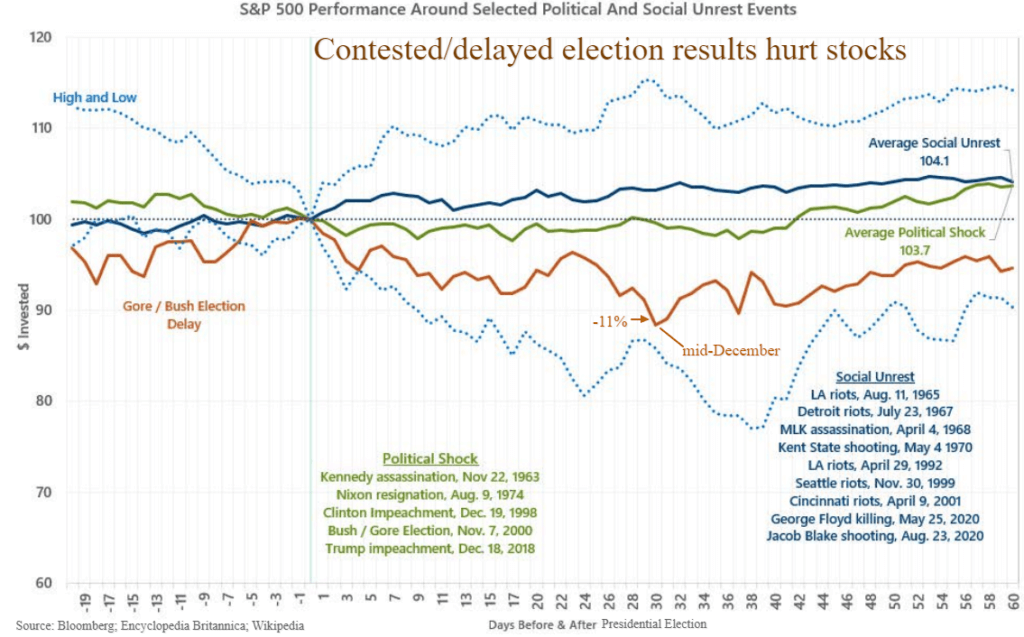 Despite the record run higher in stocks since the record Covid collapse in March, we would advise using dips to keep buying. Fiscal Stimulus of more than $1 Trillion may be warranted to buffer the small business service sector shutdown during the winter months when Covid fears will rise. However, despite a need for more fiscal and Fed money pumping as the economy slows into year end, this equity market should remain resilient as it looks past any downturn with a high degree of certainty that (1) more stimulus will arrive by Q1 and (2) an essentially fully open economy by next summer or earlier is in the cards thanks to viral attenuation and vaccine enhanced herd immunity. While a Biden sweep would ensure much higher taxes for investors and dampen longer term investor appetite, most of any Capital Gains selling will be out of the way before year end. Even though GDP could grow 35% in Q3 from the previous quarter and Q4 will see continued growth, we feel this market will withstand almost any degree of disappointment over the next two quarters due to the confidence of medical, fiscal and monetary levers that will be pulled to build the bridge to a fully open US and Global economy in 2021. Once the Presidential outcome is secure, look for stocks to continue to record highs as on the coattails of main street optimism and Wall Street skepticism.