Early stage industrial economies rely on manufacturing for the majority of their value of goods and services produced (GDP). As economies mature with rising living standards, there is a shift to consumption and services providing the vast majority of GDP and employment. One hundred years ago, less than 40% of US labor was tethered to the Service sector. Today over 80% of our labor force is used in services and 70% of our economic production (GDP) is derived from consumption. It may surprise some readers that the US is hanging on to the number one ranking for largest manufacturing economy in the world, yet the critical component of our economic future relies on keeping our overweight consumers happy. Each economic expansion exhibits a similar pattern where prosperity grows until consumer sentiment reaches a relatively elevated plateau of optimism. When that positive sentiment falls beneath the exalted zone of positivity, the economy and stock market are already in or about to enter a Bear market of pain and pessimism. Based upon many reliable surveys we would grade the current state of the US consumer as very optimistic. A dip in these measures below the lower 90’s and upper 80’s in the indices below would be a strong sign of panic by the consumer and would coincide with significant investor selling of stocks. The Trade War and incessant media barrage of negativity this year have turned future expectations lower, yet the consumer is still holding strong with full employment and a record demand for unfilled jobs.

The downturn in manufacturing and Trade War fears have infected corporate financial officers (CFO’s) with the lowest level of optimism in almost 7 years. One expects CFO’s to be somewhat prescient about their own company’s outlook, yet historically when these executives are most pessimistic, it’s a great time to invest and expect a rebound in the economy. While sentiment may fall further next quarter, coinciding with a strong correction in stocks, investors should look for market declines as buying opportunities. 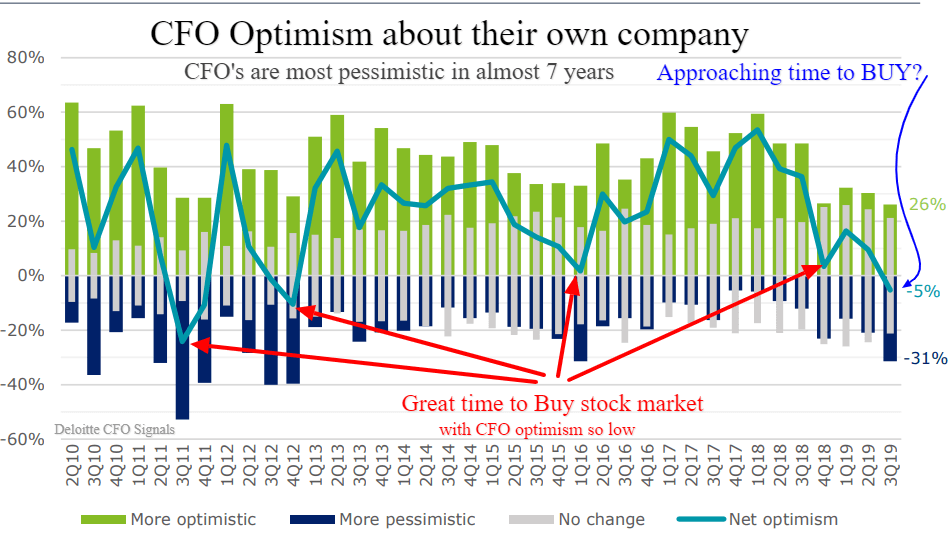 With economists, wealth managers and the media harping on almost wishful thinking for a recession in manufacturing spreading to the rest of the economy, we would counter with a few basic points. The smaller manufacturing sector only dipped into contraction territory for one month and appears to be expanding most recently. The Trade War weakened industrial sector is sluggish, but not yet as bad as the non-recession period in 2016. The economy has slowed to 2% or less lately, but the large non-manufacturing portion of GDP is expanding rapidly. While there is no certainty that consumer sentiment will be a leading indicator this cycle, it’s a stretch to fear the fall in our consumer led economy while sentiment remains on the elevated plateau of optimism. A return to Trump’s 3% GDP growth rates are not on the horizon until Trade with China is resolved, but the current state of labor conditions and consumption rates continue to keep our economy well above the waterline. Without a recession, greater than 10% stock market corrections over a 2 to 3 month period will be investing opportunities.

Fed Rate Cuts Based on Perception Not Reality