Should US consumers feel consumed by the growing avalanche of negative news? There is an unending tariff war between the worlds two biggest economies, risk of a Hard Brexit impairing the UK, a US manufacturing recession and high odds of a Presidential impeachment. Reflecting this anxiety and uncertainty manifests in optimism among corporate executives and consumers now at the lowest levels since the 2016 election. The good news is investors remain ebullient with stocks near record highs and sentiment above the upper 80’s zone that preceded past recessions. There is plenty of bad news bombarding the airwaves creating uncertainty and lackluster business investment, yet investors and consumers continue investing and consuming at a healthy pace.

Since the end of 2013 the 70% of our economy propelled by consumer expenditures has been on a tear, thanks in large part to cheap credit, full employment, accelerating wage growth and and secular shortage of labor. Even during the periodic industrial slowdowns during this record 10 year US expansion we have witnessed strong spending tailwinds that have kept our GDP well above the recession threshold. The energy recession that sent Oil to $26 a barrel in 2016 with contracting exports and lower business investment might have triggered a recession, except the strong employment trends kept the happy consumer adding a couple points to our GDP. The debate has been: will the manufacturing sector keep contracting long enough to drag down consumers and the service sector or will the strong consumer spending levels force the industrial sector to kick into a higher gear to replenish inventories and investment? Currently, both manufacturing and non-manufacturing have fallen to levels that we often connote with GDP growth rates below 1% on a quarterly basis and under 2% annually. If not for aging demographics and long term labor shortages the odds of a recession with two consecutive quarters of contraction would be much higher. If the consumer sensitive ISM non-manufacturing survey falls under 50 we would become more anxious about consumers shutting down and investors exiting the equity markets. 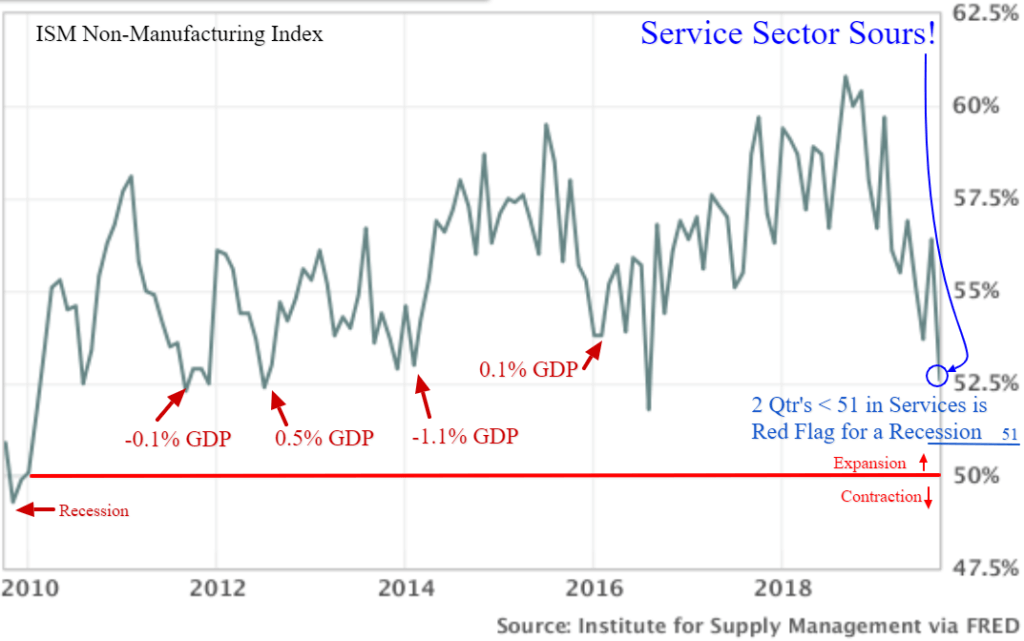 The recent employment report had ammunition for Bulls and Bears. Labor growth was below consensus estimates and has slowed to 8.5 year lows. However, unemployment is at a 50 year low of 3.5% and a major reason for slowing labor growth is the shrinking supply of available workers despite a record high level of job openings. Unemployment may be more of a lagging indicator, but we would be more concerned if the rate rose more than 0.4% off the most recent low. Aging baby boomers retiring has created a secular shortage of labor supply inflating an unusual consumption balloon that keeps our economy above water.

Another economic proxy that lessens the odds of a serious GDP downturn is the surprisingly strong Johnson Redbook same store sales growth. Typically in a mid to late cycle slowdown without a recession, this index gyrates between zero and 2% growth, while an actual recession is likely if this index turns negative. The current survey of Redbook’s 9,000 stores show continued rapid retail sales growth of almost 6%, indicating robust consumption trends without a hint of consumer concern. The stock market is rewarding consumer oriented Walmart and Dollar General stores and the overall market remains near record highs despite forecasts of negative earnings. The market may stay in its 2 to 3 month range into the late October – mid November earnings season, but expectations of a strong Holiday season for the consumer may push stock indices to new record highs before year end, especially if the proposed Trump tariffs on China are rolled back.

With the dominant consumer component in our economic growth (GDP), it’s wise to be vigilant of data regarding personal spending and service sector labor trends. While not all the economic cylinders are firing currently and China Trade is an unknowable risk, the available spending power and labor tightness continue to signal recession free growth ahead. Every 3 to 4 years the industrial economy decelerates and late 2019 to early 2020 was the expected nadir of the current down cycle. We expect the economy and earnings to bottom near year end and turn higher in 2020 and 2021.