What Does It Meme?

What does it mean when meme stocks rise and fall like fireworks? Bankrupt stocks rising 400% in a day. Collapsing companies garner Billions from financial justice warriors bidding up their failing enterprise. Clandestine traders rally their troops on social media to punish professional money managers as a pretense for running up stocks to astronomical values. When Trillions in fiscal stimulus checks were handed out to millions of ‘still employed’ workers in April 2020 to boost the economy, commission free Robin Hood type brokers were flooded with accounts chasing specious companies. While the Government and Fed were pouring trillions into an economy they had shuttered, to supplant lost consumption, many neophyte investors used the stock market as a casino trying to resuscitate the dead with their Government created medical miracle of $5 Trillion in excess savings. At some point there will be a reversion to the “meme”, but currently normal investors are getting nervous as the irrational behavior escalates. Ironically, the fictitious social media excuse for rage to take down the cheating hedge funds is doltish when its revealed that the biggest winners in this are Fund managers and wealthy individuals. In fact a couple rich investors and a handful of big money funds made almost $16 Billion in GameStop “this  month”. Not exactly sticking it to the Man. Motives of these unknown Reddit radicals are also laid bare by the current outcry to run up the pretend crypto currency Dogecoin, where no institutional money exists to defund or defrock. Profit is the motive, manipulative money managers are the feigned quarry. 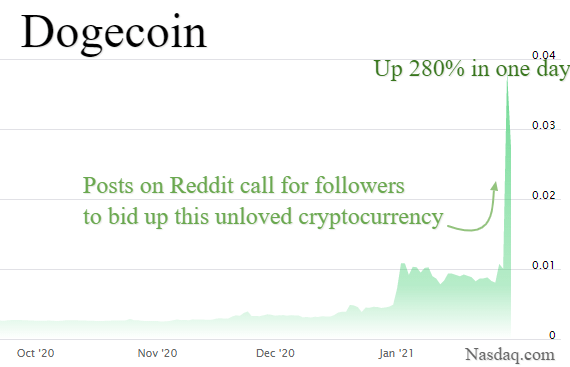 Hertz rent a car was the first pandemic prey of Robin Hoodies. Small time gamblers arrived too late to revive Hertz, but even after they filed for Chapter 11 protection from creditors, Hoodies bid up the stock 500% in 3 days, essentially transferring Billions to bankers as if their was no bankruptcy. Even after Hertz warned shareholders their stock would be worthless, social media minions periodically ran the the stock higher in thin trading like a pump and dump scheme. Such practices are illegal for hedge funds “when caught”, but this time the arrhythmia in prices were under the amorphous cover of  “retail traders” – the deserving little guy. When Hertz comes out of bankruptcy, old shareholders will be wiped out, but given the fever around reflating institutionally unloved stocks, we would expect a nice rally in the restructured Hertz if and when it opens post pandemic.

Speculators are turning to Discord, Signal, Reddit and other “colorful” platforms focusing on stocks with above normal short positions to bust (shorts profit from lower stocks prices).

Like Hertz, AMC Theaters was also on the verge of failing last Spring, having already hired bankruptcy lawyers. Unlike Hertz, AMC was able to take advantage of the non-hedge fund shareholders, the little guy, who bid up their shares from the ashes to allow AMC to keep issuing more stock and raise $100’s of Millions. A much larger wave of social finance warriors used the news of AMC creditor financing last week to bid the stock up over 400% in one day. Get ready for another onslaught of AMC issued shares for more free financing (maybe they don’t need theaters open to turn a profit). It’s likely this stock was headed to far more chimerical pricing before brokers and regulators put traders in a brief time out preventing further investment. Fund traders and market makers/specialists are supposed to quell excessive volatility, but it may take a while to muster the courage and counterbalance funding to face down this new army of buyers on wall street. With many brokers lifting trading restrictions this week, the battle seems destined to escalate.

While AMC has garnered much attention, the almost defunct brick and mortar GameStop (GME) has become the zeitgeist of early 2021. Reddit raging has rallied the troops feigning frustration with Hedge Funds, driving GME up over 2,000% this month to levels entirely devoid of any plausible future valuation. Some continue to expect $1,000 share price – because its a round number – and vow to rally more bidders if regulators try to stop them. Even politicians from both sides of the isle (for very different reasons) feel brokers and regulators should stand aside and let the games continue. Lawsuits are building in favor of more speculation chaos under the umbrella that the well known manipulators in the institutional funding world are the only victims here.

While there may only be a dozen or so stocks that are being manipulated higher through social media platforms, there is concern that this battle between alleged retail traders and professional managers or regulators heighten concern for the general market. Perhaps it’s just coincidence, but the broader stock market began selling off 4 to 5% from record highs these past few days precisely when this isolated wall street conflagration became main street headlines. The stock market was already vulnerable to a correction due the the overly Bullish bets on Call options by traders (see chart below). Such excessive optimism hasn’t always been resolved by deep 10+% market declines, but negative news triggers regarding Covid, stimulus or regulatory efforts to stem stock speculation could send stocks still lower. It will take a move back over 3800 basis the SP 500 Index to regain Wall Street confidence that the Bull market rally has resumed in the short term. Any deep correction will continue to be a buying opportunity as new stimulus at some point this quarter appears certain and growing personal savings keep the Bull market train rolling while the economy is partially closed.