In 2016 both political parties powerful polemic against the FBI led to one of the more controversial elections and transfers of power in history, leading to four years of investigations that continue today. Many expect 2020 to provide even more fireworks and uncertainty. In both elections there has been a persistently wide polling margin in favor of the Democrat candidate. As occurred in 2016, Trump support faded in September until mid October. While many on the Right hold out hope for errant poll sampling once again to shock the current overwhelming pro Biden consensus, Trump voters may be missing their temporal lobe, complacently forgetting the FBI’s October Surprise. In late October 2016, the FBI ironically triggered a major poll shift toward Trump during the final week before election day when FBI Director Comey wrote: “the FBI has learned of the existence of emails that appear to be pertinent to the investigation” into Hillary Clinton. This uncertainty of Hillary’s legitimacy added rocket fuel to a Trump surge in swing state polls in the final days providing a Trumpian sweep. Now that it’s October 2020, Attorney General Barr has begun releasing Federal intelligence documents that some think will reveal evidence of a conspiracy against Trump connected to Biden. Currently it seems, all that can possibly go wrong for Trump has gone wrong: Failing to pass a Stimulus package to boost the economy. Failing to eliminate COVID. Contracting COVID himself after months of downplaying its risk and possibly missing a key Presidential debate as a consequence. Failing to reverse his flagging poll numbers with the first chaotic debate and possibly a new upturn in unemployment in the weeks ahead. Despite these impediments, Trump’s average of poll numbers in swing states is actually slightly better relative to Clinton on this date in 2016 when Trump was victorious.

While the implication above of a plausible Trump reelection seems chimerical to most, the caveat is that Trump still must significantly increase his popularity during these final few weeks to have a chance. In other words, if Biden maintains the same gap today until November 3rd, Trump and his Senate will lose badly as all professional oddsmakers have asserted. Note below the 2016 October Surprise Trump jump after FBI Comey’s national address to the nation. This October thus far has been a modest October Surprise for Biden, not Trump, but we expect both sides to keep the prozac refills elevated with a barrage of negative news. 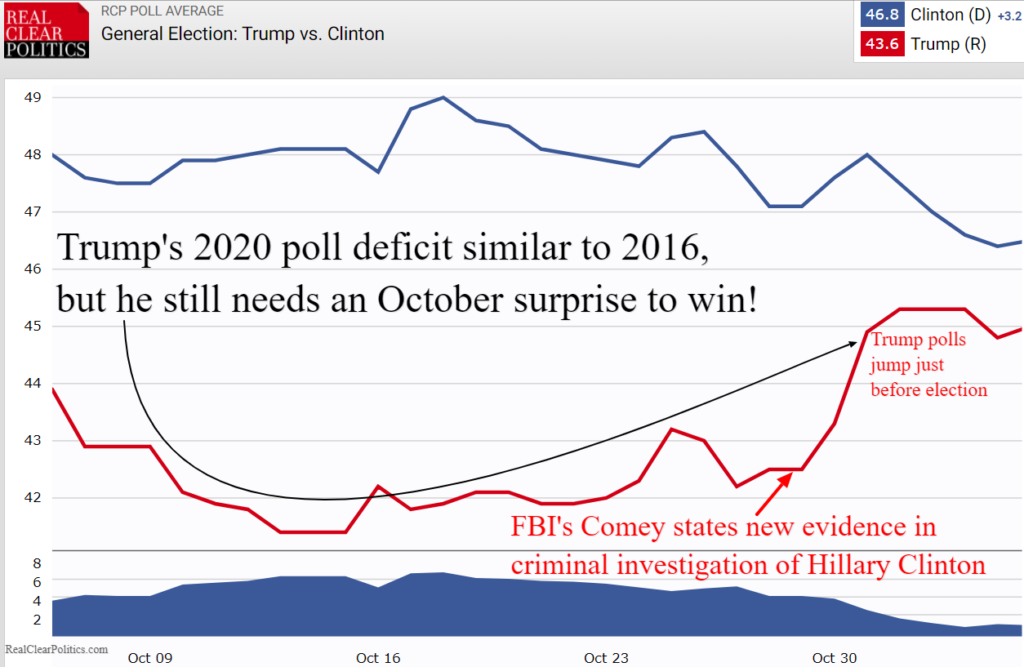 As in 2019 when hope for a China Trade Deal was continually delayed, investor enthusiasm has remained buoyant since July that the delayed Stimulus Deal will be signed. Optimism is also being propelled by a massive monetary and fiscal tailwind that many expect to blow even harder in a Covid free 2021 with new infrastructure spending and pent up consumer demand when safe travel returns. Without stimulus we favor the equity trading range since September 2nd to continue until a clear winner of the Presidential race is known. With both candidates, the stock market should move higher next year. An even stronger rally in stocks and gold is favored under a more spendthrift Biden administration imbued with a mantra of historic social engineering. Under a President Biden, longer term concerns with trade, taxation, policing and regulation could create a hazardous environment eventually, but for 2021 it could be an historically euphoric year for health and jobs. With either Trump or Biden it will be a positive 2021 with rising stocks, metals and interest rates.