Fear of the unknown about the Coronavirus (COVID-19) is a problem. Central Banks can print Trillions and cut interest rates, but they can’t make people fly on planes and they can’t speed up a cure. There is no vaccine likely until the virus is no longer a threat, but global government responses to combating this contagion are creating a pandemic of fear, increasing the risk of a global recession and a Bear market in stocks. Global air travel is expected to fall this year for the first time since the Global recession of 2009. Even domestic travel within the US has fallen slightly and could plunge when there is an “outbreak” where the contagion in the US increases more rapidly. While much of Europe and the US have yet to feel much of the economic impact of this pandemic, Global manufacturing and production indices have already fallen at rates mimicking panics of deep Recessions. The February through April data should reveal some ugly charts exemplifying the sudden economic and investment impact of this fear contagion. 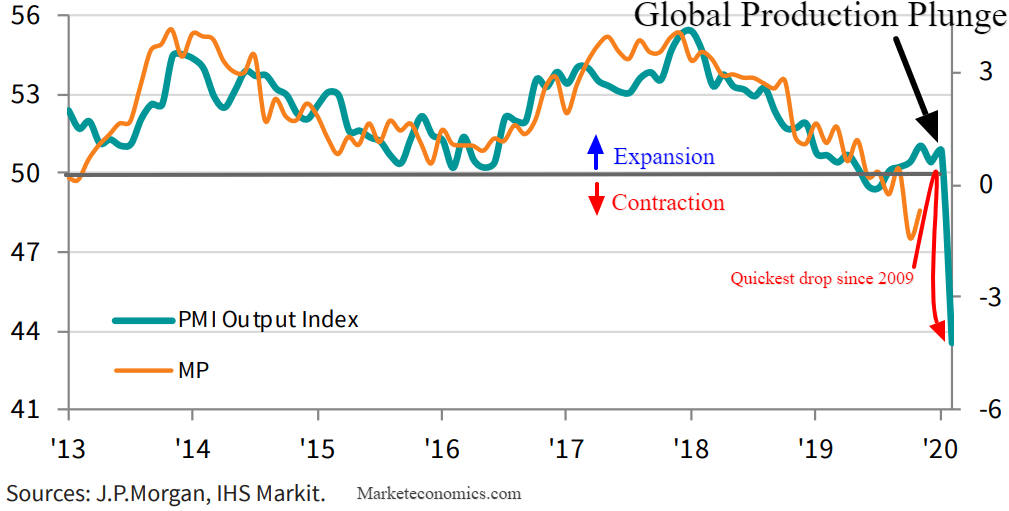 The collapse of air travel and hotels by businesses and vacationers of course is one of the more immediate results of the Fear Pandemic that has suppressed Oil and Jet Fuel prices. If there is a bright spot for beleaguered Boeing it may be that while production has been partially shut down for much of the past year, Boeing’s only rival, Airbus can no longer steal as many new plane orders as airlines around the globe have halted purchases until the world economy recovers. Unfortunately the wave of growing global flight cancellations will take a few months post Coronavirus, just to return close to normal. It’s unlikely Jet Fuel or Oil prices will surge anytime soon. A modest rally of WTI Oil into the low $50’s is possible short term as OPEC cuts production by another Million barrels a day, but rallies should be short lived as long as the virus is escalating. 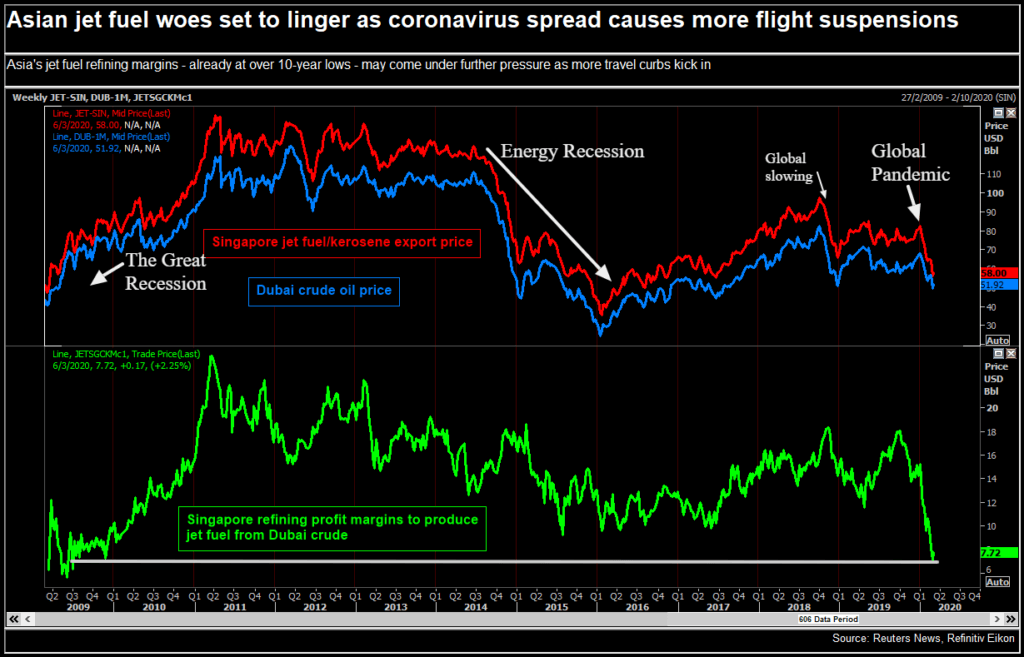 With US fossil fuel production increases over the past decade due to our superior technology, petroleum prices have remained subdued. While low inflation and stable Oil prices have been a great environment for the stock market in general, falling Oil prices are a negative as it reflects slowing global growth as in the Great Recession of 2008 – 2009 and the Energy Sector Recession of 2015 – 2016. The current drop so far in Oil from the $60’s/barrel to the $40’s is less severe versus past economic downturns, but this Coronavirus induced drop in prices is a negative sign for equities short term. The OPEC effort to keep prices near or above $50/barrel will fail and new multi-year lows near $40 or below is likely. The market demands that OPEC cut one million barrels a day from current levels when they meet this Thursday, March 5th. The market also needs Russia to be a part of the expected production sacrifice. Any deviation from these expectations will send prices lower.

On the weekly charts we can see where the previous hit to Oil in late 2018 was due to economic slowing. Now the same weak pricing levels have been tested due to the current biologic scare. The next test of $43 to $44/barrel Oil is likely to propel prices into the $30’s, a 4 year low that will escalate calls for a global Recession. ($26 to $29 potential low). The impact of Corona’s Global slowdown upon the US economy is not likely to manifest in the data until the March and April numbers are reported, but we should expect more weakness in Oil. Assuming Oil moves back to the lower $40’s or lower, expect Stocks to fall to new 2020 lows in sympathy. If OPEC production cuts this week fail to keep Oil prices well above recent lows, then the correction lows in the major stock market benchmarks (Dow, SP and Nasdaq) will be broken. The hint of hope is that whenever this virus climaxes and begins to subside, there will be a pent up demand effect that will cause significant short term consumption, production and inventory rebuilding that will send the economy and stock market into expansion mode quickly. Advanced clues for future changes in the US should be seen in other free market countries like S.Korea and Italy where the outbreaks are worsening.