Over 2,000 years ago Iran, known then as Persia, was the worlds first super power. Since becoming an anti-western theocratic Islamic Republic in 1979, Iran has been in the cross-hairs of conservative leaders in the US. In 2016 President Trump campaigned on vows to defang Iran and has doggedly attacked Iran’s economic and military vitality. Trump broke the Iranian Nuclear Agreement, instituted sanctions and has begun curtailing Iran’s lifeline of petroleum exports with more severe sanctions. Now he has thrown down a new gauntlet, threatening Iran for indirect hostility by its proxies or efforts to develop nuclear capabilities, to which Iran is escalating both. This major new line in the sand isn’t fully understood yet outside the Oval Office, but it greatly increases the odds of an Iranian misstep in the eyes of the US that will trigger the excuse to unleash a devastating bombardment. While its unlikely Iran will leave its calling card with a direct assault on US forces or allies in the Middle East, Iran has always operated under the cloak of ambiguity through its military and financial support of its Hamas and Houthi proxies on the borders of Israel and Saudi Arabia. Houthis are openly attacking Saudi Arabia and recently Hamas stepped up its attacks, firing 700 rockets into Israel. This weeks mystery attack on Saudi oil tankers and drone attacks on Saudi energy infrastructure may be Iranian code declaring that if Iran can’t export oil from the Middle East, nobody can. The US is positioning its military assets near Iran and its proxies. We would expect a coordinated attack from the US and Israel over the next few months causing a spike in Oil and Natural Gas prices. Even without a US military strike, the elimination of Iranian supply, attacks against the Saudis and potential for a positive trade agreement with China all support higher prices. The unknowable downside will result if the US and China trade spat continues to escalate indefinitely.

Starving Iran of its critical Oil revenue is expected to curtail most of Iran’s support of its proxy armies in Yemen and the Gaza Strip. Oil shipments from Iran have already fallen from 2.5 million barrels per day (bpd) to less than one million, with a realistic risk of losing their entire $50 Billion a year in energy exports. Iran remains publicly defiant, threatening to develop nuclear weapons if Europe complies with Trump’s new sanctions. It’s a Sisyphean tightrope walk for the Iranians to retain their oil wealth and avoid a US confrontation.  It appears this will play out with Iran entering a Depression, wiping out Iran’s dominant influence in the Middle East, along with the US and its allies increasing their market share of petroleum production. US Oil and Natural Gas exports continue their hyperbolic growth and the collapse of Venezuelan and Iranian supplies will provide incentive for more US capital investments in energy and even greater exports ahead. 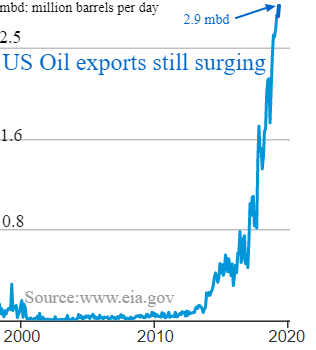 When Oil fell from $108 in 2014 to just $26 in 2016, US Oil exports didn’t pause and total production was barely dented. Superior US technology continues to make our energy production cost the envy of the world. While the Saudi’s are only too happy to fill the supply void as Trump drains Iran’s export tankers, the US has more sustainable capacity expansion in the years to come than OPEC. Despite the rapid growth in US energy output, there would be an even bigger US supply bubble if there was enough labor, pipelines and terminals to handle the massive US potential. Uncompleted well sites in the US Permian Basin keep hitting new records as they await the manpower and infrastructure to satisfy surplus production capacity. Domestic production averaged 9.4 mbd in 2017, 10.9 mbd in 2018 and is currently averaging well over 12 mbd in 2019. We expect US Oil production to surpass 13 mbd in 2020, barring a recession. 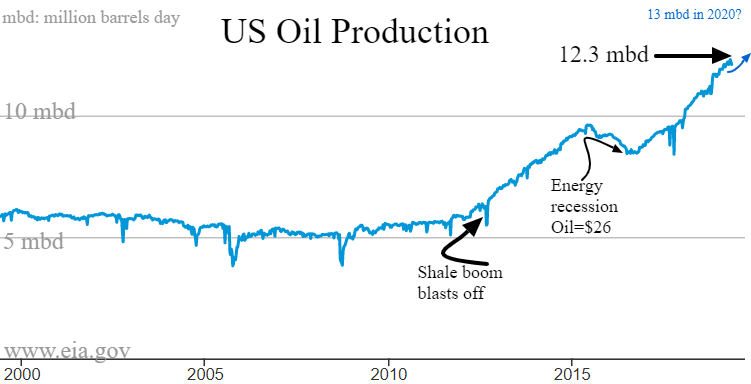 The US Energy Information Administration (EIA) has been frequently adjusting its outlook as geopolitics have played an larger and ever more volatile influence. The Oil price crystal ball is subject to sudden changes in OPEC quotas, imploding countries, military conflicts and trade wars, all of which are realistic events to watch out for this year. On the downside we don’t expect any lasting Oil price drops below the $50’s without an unexpected recession. With Trump’s ability to shut in Iran’s energy exports and likelihood of military action targeting Iranian proxies and eventually Iran itself, we feel the Oil price risk is tilted to the upside, despite the potential for a short term trade war induced global slowdown.

The future for Iran looks dismal for the next couple of years, but like a wounded tiger, Iran is using its illusive proxies in Yemen and elsewhere to wreak havoc on Middle East Oil production hoping it will not become the target of our retaliation. Look for US attacks in Yemen, Gaza and eventually Iran to occur in 2019 which would spike Oil back to its 2018 highs.