Does Exxon Have More Money Than God?

The President’s odd choice of hyperbolic criticism that Exxon has more money than God may be offensive to those of faith, but begs the less celestial question: How Greedy is Big Oil? Net profit margins of Oil and Gas companies are surprisingly modest. Politicians survive on their popularity; thus, job security was likely the main motivation in continuing to demagogue Big Oil to avoid the ire of voters for the midterms this year. Big Oil ranks below average with regards to profit margins and will always ramp up production if there is a profit in doing so. 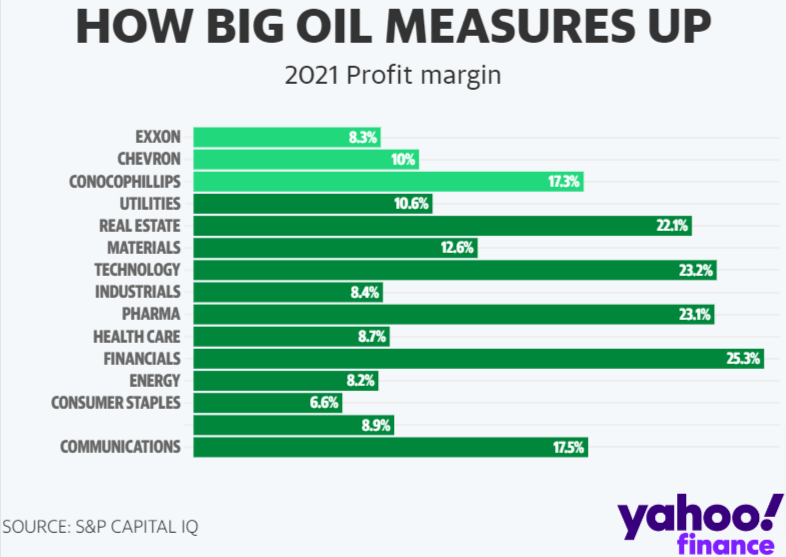 If 8% profit margins are worthy of constant derision, then pitchforks should be in abundance outside of Apple headquarters, not Oil companies. Ironically, Exxon is one of the most aggressive Oil companies pursuing increased production and refining capacity. Working with Exxon would seem to be a more productive strategy than threatening their profits. Epitomizing the tone of the tone of the White House public relations campaign, they finally invited energy industry executives and CEO’s to consult on ways to elevate petroleum output.  However, the President revealed the importance of optics to his base was more important than action by avoiding any contact with attendees. Instead, Biden scheduled a meeting with Wind energy lobbyists at the same time to drive home where his focus lies. Perhaps if Apple’s Tm Cook or JPMorgan’s Jamie Diamond came to town, they would garner more attention.

Of course, Exxon and the energy industry are garnering elevated nominal profits this year as their underlying products inflate. However, despite the false reporting by political media, these are not record nominal profits or profit margins. False accusations of price gouging avoid the real problem of Government policy that prevents a rapid supply response by the free markets. Despite political assertions of record output, the US will need a couple years to reach their pre-Covid records, unless the Government incentivizes a long-term production plan. As RBN Energy’s David Braziel opined, the Government should ban development restrictions on land and water, renew canceled leases, fast-track critical energy projects, streamline and relax the environmental permitting process, accelerate LNG exports and LNG applications, eliminate Government environmental preferences for raising capital and much more. We would add two more easy ones: scrap the 100-year-old Jones Shipping Act requiring only US cargo vessels in US waters and use the more abundant winter fuel mix year round despite the higher carbon footprint to increase refinery output. Don’t hold your breath for these easy initiatives since higher energy costs have long been the publicly stated goal in order to force a more rapid adoption of renewable energy. Big Oil is already spending Billions every year on renewables, but they need a coherent energy policy to know where to allocate capital. 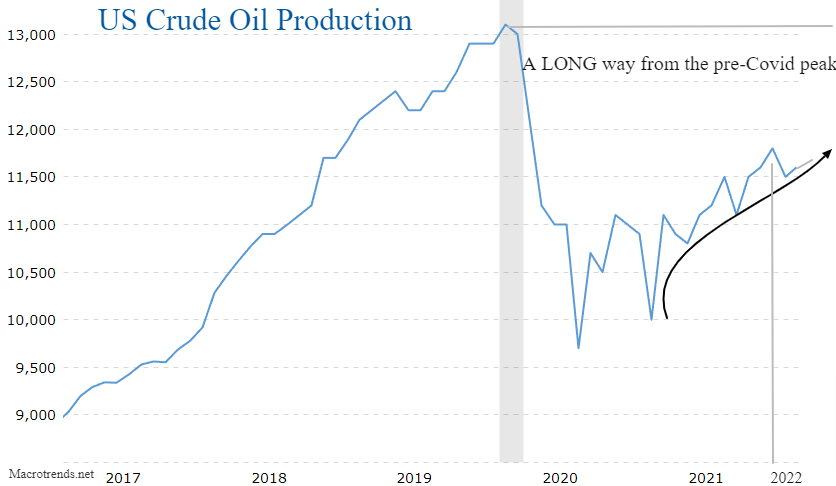 Biden has also told Big Oil that he wants the petroleum refineries reopened that were terminated during Covid due to renewable energy conversion mandates. The Billions it would take to reopen these facilities to reconvert them back to dirty energy requires a new Government policy that doesn’t promise to bankrupt them as soon as the Ukraine crisis ends. If Congress is willing to adopt a wartime footing, as the President desires, then a truly anything goes race to the moon effort should begin that includes Coal, Petroleum and Nuclear. Without such an endeavor, Putin will continue picking off our allies to support his war, as he has already accomplished this with India, S.Africa and Brazil as major energy export destinations. This supports Russia’s war as well as greatly increases the legitimacy of their Ruble currency. Putin’s further goal is to split NATO and fissures are already appearing with some of our European allies talking of abandoning Ukraine in favor of Russia if a peace settlement isn’t reached soon. This winter will test NATO’s resolve when Natural Gas demand soars while Russia holds the thermostat controls for Europe to heat their homes and keep factories running. With low energy inventories globally, Russia is in a strong position.  Recently, Russia cut off 10% of total European gas exports, just enough to prevent resupplying safe stockpiles until winter triggers panic rationing. How naive of Europe to rely upon Russia for their very survival and to continue mothballing Nuclear Power plants today. Like the US, they are paying lip service to the true risks from the Russia – China alliance against the West. Western reshoring is underway and globalization is in full retreat and accelerating.

Recent Presidential polling data has fostered yet another unproductive proposal this week, to eliminate Federal and State gasoline taxes at the pump until the midterm elections. Unfortunately, this will not increase supply and may in fact increase demand and thus exacerbate energy inflation. The President also implored gas stations to lower their prices since this is a wartime atmosphere in his opinion. It may surprise our feckless politicians that most gas stations are not owned by Oil companies and their profit margins are razor thin at less than 2%. Perhaps there is great confidence that the media will help the Democrats hold onto power, but the polls are screaming for real action instead of pointing fingers, which emblematizes politicians on both sides of the isle. 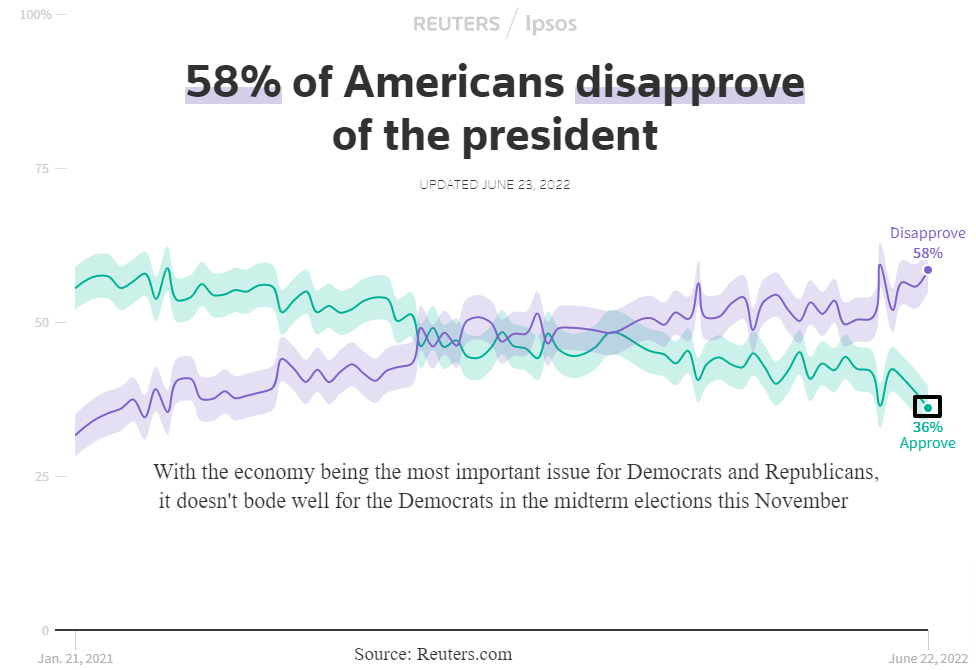 Without Government help to foster a more rapid energy supply expansion, we have to rely upon the blunt monetary tools of Fed Chair Powell to crush demand and tightrope a Recession over the next 12 to 18 months. As we have discussed previously, this means stock investors will need to remain with heavy cash positions or shorten their investment time horizon for equities until inflation and energy markets deflate decisively. Major Bear markets don’t bottom without a major downturn in Oil. A Bear market in Oil and inflation will eventually translate into a flat economy and mildly rising unemployment in 2023. That is when we expect excellent long term entry points for investors next year as economic concerns create a panic climax bottom.