Fear of Federal Funds rate increases have sent stocks and bonds lower. The US Federal Reserve Chairwoman Janet Yellen continues to assert that the decision to start raising interest rates again will be dependent upon stronger economic data. However, most of her regional bank President Board members hint that incoming data is irrelevant and higher rates are warranted now. The data continues to weaken yet the markets are listening to the Federal Reserve Hawks who have concluded that monetary policy has moved too far and needs to tighten its belt before the next panic ensues. The final straws this week were the words of ECB President Mario Drahgi agreeing that monetary stimulus should pause as well as the Sell everything dictate by DoubleLine Capital CEO Jeff Gundlach. Once again Jeff presented his power-point reasoning for why interest rates will now move higher. On cue, interest rates rose sharply the past 2 days as Bonds and Stocks sold off. 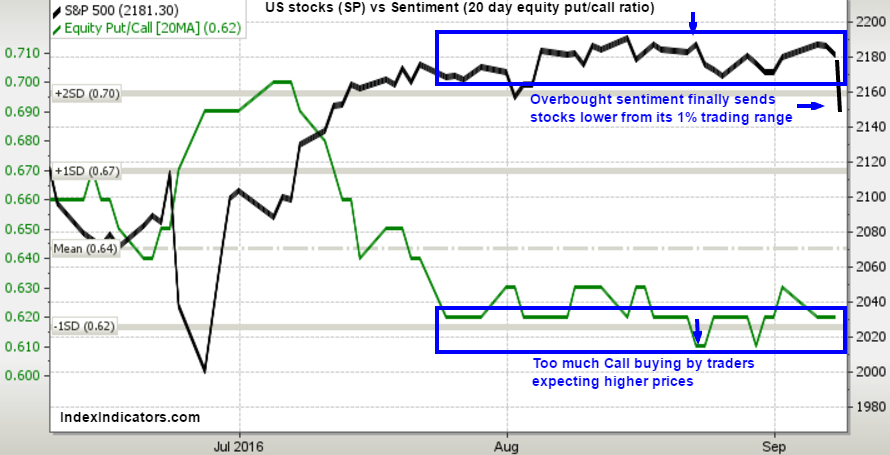 Our month old warnings of a minor correction have provided a ceiling for stock prices which have paused near record highs in a very tight 1% trading range. With the fears of rate hikes becoming more pronounced, stocks have finally sold off heading for our targets of 2120’s basis SP 500 Index and near 18,000 on the Dow.

Dow 19,000 and SP 2250’s remain as reasonable targets once this correction has run its course and the trend of new record highs is reconfirmed.

US and global economic data do not yet support a reassurance of better earnings needed for higher stock market valuations. Corporate earnings have been declining for over a year, led by energy. As long as Oil prices can hold above $40 and work into the 50’s, we should see the rising earnings trend resume by 2017.

The consensus of economists expect an above trend 2.5 to 3+% US GDP growth in the 3rd quarter. Such expectations look optimistic unless inventory investment surprises to the upside. This has given Central Bank Hawks cover to send “short term” fear into stock and bond markets that increasingly expect higher rates by year end.  Our KDelta trading model alerts posted over a week ago sold Bonds just under 169 on Thursday. 164 – 166 should provide strong near term support for this rise in rates that we feel is based upon specious Fed assumptions. Almost 80% of experts surveyed expect no rate hike September 21st and with 3 Fed voting members speaking on Monday September 12th we should have a good sense of the real consensus when they mention their current views on inflation and urgency of action.

With collapsing oil stockpiles (17 year record) and several major producers talking of a supply freeze, Oil prices should surge to new highs. Empty words have done a marvelous job in recent weeks periodically spiking prices higher, only to falter upon reality. The reason Oil inventories made a very surprising plunge last week was due to Hurricane Hermine’s blockage of Oil Tanker off-loading. This will reverse quickly and support the seasonal tendency for surplus inventories to grow in September/October.

As for the manic claim of an OPEC production cut – or “freeze” – markets seem to be pretty gullible. All producers want higher prices, but they also want peak production and maximum market share. If the Saudis really did cause Oil prices to collapse in 2014 (they did not) they would add more Oil to this oversupplied markets until Oil fell to $10/barrel at which point much of the worlds marginal Oil would dry up. The Saudis care first about market share long term and revenue short term to bribe the restless natives. Their fingers are crossed they can keep the local jihadist’s at bay until the ever rising world consumption trends begin to reverse rising oil inventories. 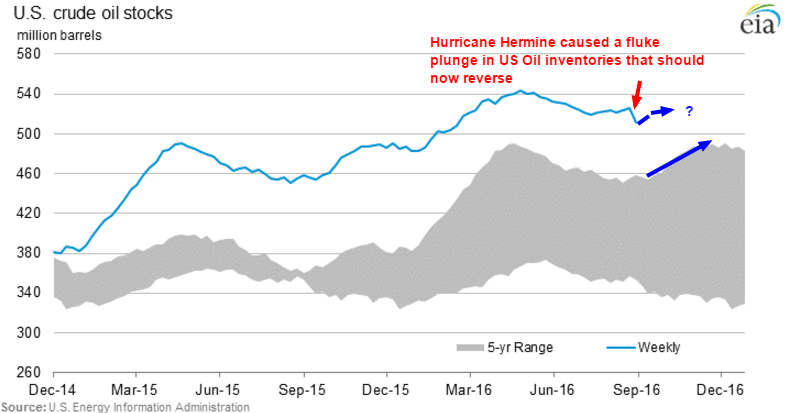 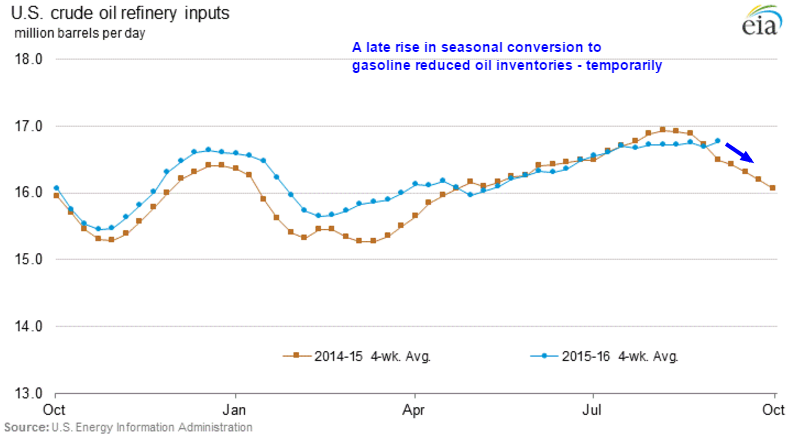 For the first time Iran has supported a production freeze  – that is – after they achieve 4+ Million barrels a day! Nobody is talking about “cutting supplies”. OPEC is waiting until all producers have hit their maximum production levels and then make the meaningless proclamation that they will not increase production any further. Global economic growth rates and oil demand rates along with a little luck is the only hope OPEC has of servicing their growing debts and creating an under-supplied marketplace.

Nigeria, Libya, Iraq and Iran are adding supply in coming months as well as surprising potential from high efficiency new well production in the US. Calls for $60 Oil are premature. Our forecast a year ago was for Oil prices to bottom in the 1st quarter 2016 near $30 (later $26) and remain in a trading range until the 2nd quarter of 2017 before prices can be sustained above $50. Surplus inventories are rising, but unless a recession arrives in 2017 supply and demand trends target a 2nd half of 2017 when inventories finally begin to shrink steadily. 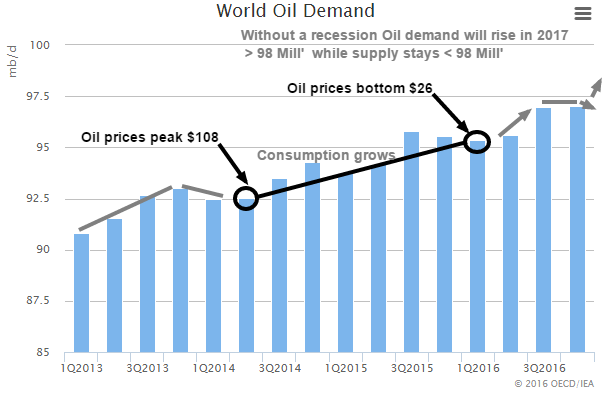