In mid October President Trump will be required to certify the Iranian Nuclear compliance once again or push to nullify the multi nation Nuclear Arms Treaty. Already the US has presented evidence of an unrelated UN Security Council resolution violation. This resolution has not been accepted by Iran and is insufficient to breach the Treaty. While the UN will not support strict nuclear inspection enforcement, the odds are strong that new US economic sanctions will be imposed on Iran in mid October. This will add some wind behind the Oil rally, as it will be assumed the US is one step closer to abrogating the nuclear deal and shutting down a major portion of Iranian Oil sales.

Iran’s production goal is 4 Million barrels and any enforceable US sanctions or related military strike will send Oil prices surging back towards $60 and shut down some of newfound windfall.

Another feather in the cap of energy Bulls is that the ever rising inventory glut is finally shrinking. Instead of adding 100 Million barrels to US inventory each spring and contracting 40 Million each Autumn, US petroleum stocks this season have fallen significantly deeper than normal. When excess inventories rise next spring they should remain beneath this years record 535 Million Barrel stockpile. This bodes well for 2018 supply and demand fundamentals, keeping prices on an upward bias. We turned Bearish on Oil in mid 2014 and remained so until early 2016, from which point we have maintained a trading range Oil price forecast in the $40’s to low 50’s. Soon we will be ready for the next leg up to $60. 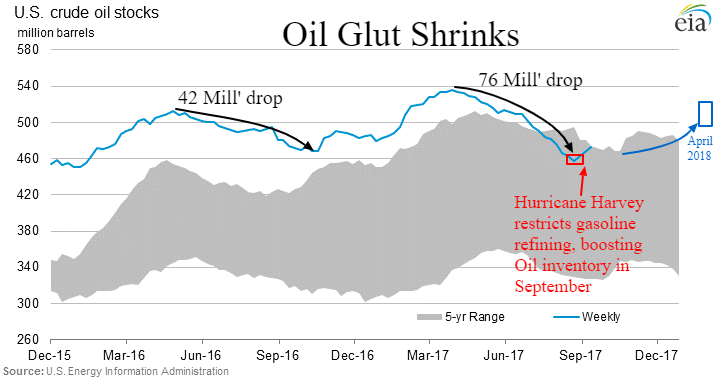 After an early 2016 low of just $26/barrel,  Oil prices traded around the $50 area for the past year spurring energy companies to reverse the record capital expenditure drought and turn it into a 2017 flood. As long as the global recovery stays on the current trend, Oil prices and capital spending should remain elevated. 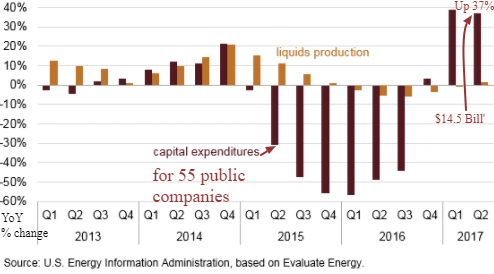 The good news for energy companies is that after 18 months of severe losses they are finally feeling relatively optimistic. Natural inventory reduction from organic supply and demand convergence along with potential Iranian sanctions could give a boost to Oil related stocks in 2018. Should Trump move beyond the economic sanctions we expect in October to actual nullification of the Iranian Nuclear Treaty or even military strikes, then Oil will move well over $60 and give a boost to the whole energy sector (XLE) including the left behind shale service companies.

Yellow Flag for Energy Bulls:  Electric Vehicles (EV) are no longer a delusional vision of Green fanatics. While Free markets would keep allegedly Green energy cars off the streets “en masse” for many years to come, Governments around the world have mandated the demise of the internal combustion engine. China will produce only electric cars by 2030, England and France will ban traditional gasoline cars by 2040. Norway jumped the gun having almost no EV’s 6 years ago to 30% of their domestic market share today. By 2030 every car maker will have an EV version of every car model. The point here is that for the first time in history, Oil “consumption” may shift gears into a secular decline, which will keep fossil fuel prices subdued in spite of the elusive “Peak Oil” supply forecasts.

Short term, we normally see a seasonal Oil price drop into the December – February time frame, but with sharper than normal inventory cuts and Trump’s potential tightening the noose around Iran, investors shouldn’t be too complacent waiting for that one final test of $40 before prices head to $60+ by next summer. Be ready to buy the 4th quarter 2017 – 1st quarter 2018 dips.