The US Oil industry began in 1857 with wildcatters and has always had an entrepreneurial aspect. As with any industry, consolidation occurs as an industry grows and participants become numerous. When inevitable economic shocks occur, like the 2020 Coronavirus, prices and profitability fall until a Darwinian shift triggers enough bankruptcies to bring supply and demand into balance. Strong hands pick up the failed assets of weak hands at pennies on the dollar in a Schumpeterian process of creative destruction leading to a new lower cost base for renewed growth. The current destruction progress is just over a month old and without Government bailouts impeding free markets, we would expect to see 50 to 85% of Oil shale frackers go out of business over the next year. Perusing the entire history of Oil prices with inflation adjusted Dollars, we can see this pandemic period as the most painful bust our country has ever seen. With no Virus treatments in sight to cure the social distancing stay at home lifestyle, capital spending in energy will be impaired for a long time beyond the coming bounce back in Oil prices this year.

If there’s a silver lining, the 11 years of depressed Natural Gas prices should get a longer term boost as this byproduct of Oil drilling incurs a sharp supply reduction. Oil will need to sustain prices well above $40 before production levels slowly begin to accelerate, thus the long term oversupply of Natural Gas will finally ease and move toward a profitable supply and demand balance. A bonus outcome will be significant curtailment methane flaring that wastes energy and creates tremendous amounts of Greenhouse gas. US flaring (burned) Nat Gas and venting (unburned) from the two main Shale basins in the US waste about 500 Billion cubic feet of methane a year, or the equivalent of 7 Coal-fired power plants that generate electricity (account for 23% of your Tesla’s electric fuel).

The President is trying hard to save jobs and stem the tide of Oil flooding storage tanks due to this sudden ~30% fall in Oil consumption. Trump successfully mandated that Saudi Arabia and Russia cut production, initiated filling up US strategic reserves and has threatened tariffs on Oil imports to boost prices. However, free markets have vetoed these efforts, sending prices below zero to balance supply with demand. The nearby contract for Oil fell almost 300% on delivery day this week. Everyone knows that assets typically can’t fall more than 100%. If a commodity trades less than zero, then sellers must be paying others to get rid of an asset that has turned into a liability. We witnessed US interest rates trading negative last month for the first time in history. Now we have a new paradigm as Oil due for April 21st delivery traded at a negative $37 a barrel. There was so much supply as measured by West Texas Intermediate (WTI) Oil at Cushing Oklahoma, that investors had to pay buyers to clear the risk.

Due to the pandemic arriving in Europe and the US in late February, there was an historic Government shut down of major portions of the economy to address this Coronavirus that we are still living through. The resulting price collapse from Oil in the $50’s to essentially zero triggered a Volatility spike surpassing the record stock market Volatility during the March lockdown panic. The Oil price movement beyond normal standard deviations rose sharply in early 2016 and late 2018 when prices fell about 80%. The current Volatility spike is multiples above these Bear market panics. With the expiring contract falling deeply negative and the next month contract already testing $6, the downside momentum measured by the Vol Index (OVX) appears to have peaked. However, we suspect Vol will remain elevated longer than normal, at least through mid May when Oil could test single digits or worse in anticipation of the monthly contract delivery expiration. 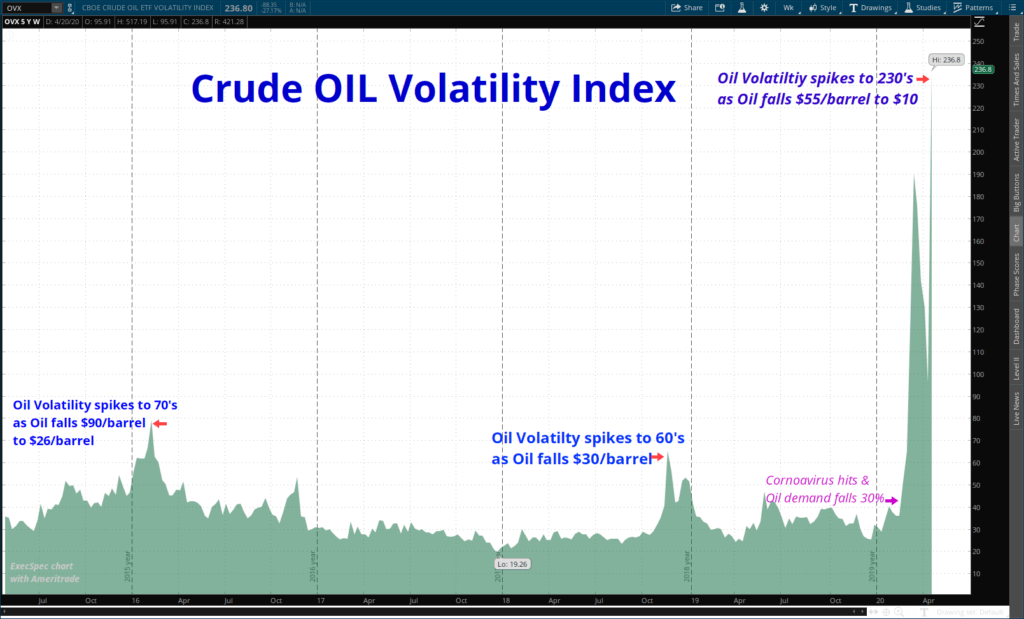 When Oil fell to historic lows of $26 a barrel in February 2016 during a major energy sector Recession, many US Shale frackers side stepped bankruptcy, lowered their cost of production with hydraulic shale fracking and small producers proliferated as prices rebounded above $50 during the 2017-2019 economic recovery. This time the Shale industry should consolidate massively with an extended period of depressed prices due to the low odds of a robust recovery until a COVID treatment is ready for prime time. Sadly for the entrepreneurial diversification of our smaller drillers, ExxonMobil and other behemoths will be picking up the pieces next year on the cheap with no intent for utilization. When the economy and energy prices rise over the next couple of years, we will not see the same production spike as in the past as the Oil conglomerates land-bank their newly acquired Oil reserves of failed Shale players and stifle production to maximize prices. The outcome will be good news for the Saudis and Russians, although they will have accumulated massive losses in the process.

Now that Oil storage capacity is almost full and prices are $20 to $30 below the cost of production, energy companies will fail and survivors are reducing supply. Once we clear the excess supply imbalances in May and June and nudge consumption higher this summer, volatility will ease. It may be years before most energy companies return to their price highs, but the survivors can have modest rebounds in business as Oil prices approach break-even and generate 2x and 3x stock returns from their currently debilitated levels. Additionally we would expect the long term glut of Natural Gas to achieve a rare profitability at much higher prices in a couple years, for the first time since 2008. Readers know we have been steadfastly Bearish on Oil since the pandemic reached the US in late February, looking for below market prices throughout the collapse. Look for energy prices to make one more attempt on the nearby spot contract to test single digit lows near mid May where longer term bottoming can begin.

Waiting on the Corona Curve Collapse