What Coronavirus Data Can We Trust From China?

There are lies, damn lies and statistics, as the saying goes. Regarding China, the data implies they have lied about their statistics, yet there is evidence the COVID crisis in China is indeed mostly over as they claim. It’s inconceivable that a country of 1.4 Billion people who waited almost 2 months to implement a quarantine have fewer deaths from this pandemic than Italy?  China’s population is 25 times larger than Italy. Our personal contacts in China as well as many insider medical worker reports, indicate the mortality numbers are multiples higher than reported. It was also interesting watching President Xi speak to a group of staged citizens at the epicenter in Wuhan recently while the Wuhan traffic activity app the same day revealed a 90% reduction in business in that city of 11 Million (larger than New York)

What is true is that most cities in China have returned to normal activity, other than Wuhan, according to traffic congestion monitoring. Rumors of China Soybean purchases, fulfilling the forgotten major Trade Agreement with the US, support the theme that China is becoming optimistic and will spur global stimulus. Further on the ground evidence that China is getting back to normal comes from the fact that Starbucks has reopened 90% of its stores. Starbucks expects to have over 95% of their 4,200 stores in China open for business soon. However, the rest of the world is in the deadly parabolic acceleration stage of contagion and fatalities today. If this chart of World COVID deaths follow the – potentially accurate – Chinese path, then we should start seeing the mortality rate slow in 2 to 3 weeks with Bullish steps to open our economy bacxk up starting between mid-April and late May. 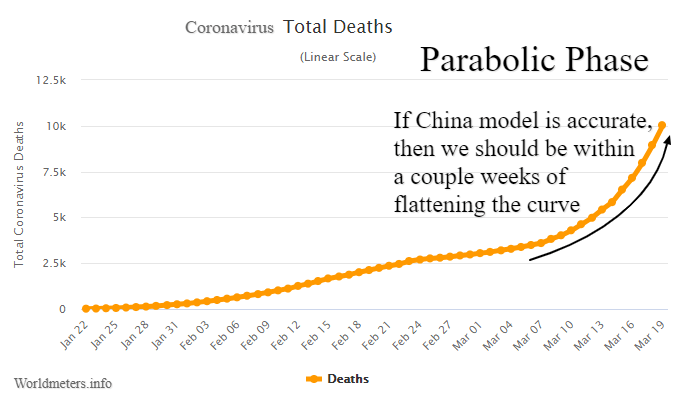 Now that China is beginning to run their economy closer to normal and even democratic South Korea has far fewer active patients over the past month, it’s reasonable to assume that even without a major medical breakthrough arriving, the US and Europe could be “within” 2 months of gradually relaxing the economic shackles on the economy and encouraging everyone to return to work before summer. While the all clear signal may arrive in stages between April and September, optimism on defeating COVID-19 should increase as the rate of contagion slows, percolating into the stock market in April.

When to Buy the COVID Crash

When to Buy the COVID Crash
Ready to start creating financial success? START YOUR FREE TRIAL