As the traditional 2021 Infrastructure Bill passes the Senate this week, analysts are flooding the airwaves with stock recommendations to take advantage of yet another massive Government stimulus proposal despite a booming economy. Vulcan Materials, Martin Marrieta, General Electric and Emerson are among the great companies being touted to take advantage of this Government largesse. Interest rates rebounded modestly on the stimulus news this week, while inflation fears rose on expectations that labor shortages and supply chains will become even more stretched. However, get ready for the great stall as Nancy Pelosi’s House has repeatedly vowed not to pass this rare bipartisan legislation until the much larger non-infrastructure social welfare bill passes the Senate. Democrats have vowed to use a Continuing Resolution (CR) to pass the additional $3.5 Trillion social wishlist package, which will require every Senator on the Left to support. This tax hike and subsidy legislation would push massive Federal relief spending during this Covid pandemic past $10 Trillion, not including the $4.1 Trillion and counting in debt buying liquidity added by Chairman Powell’s Federal Reserve Bank (Fed) as it fulfills its sense of filial duty.

The stimulus over the first 2 years coming out of the Great Mortgage Recession of 2008 created just $1 Trillion in excess Government fiscal spending along with another $1.3 trillion of liquidity added by the Fed. By comparison, assuming the rest of 2021’s planned fiscal stimulus bills pass along with continuing Fed asset purchases, the total crisis spending during the pandemic would approach $15 Trillion, about 7 times the total of  2008’s Great Recession. Regardless of the political inspiration driving this $4.5 Trillion in proposed spending, one should at least ponder if such Depression level emergency money printed out of thin air is warranted while the GDP is growing 6 to 7%. Will this legislation become law as proposed? No, $4.5 Trillion in new emergency spending will not occur and taxes will not rise as much as rumored. However, after a contentious debate of moderate and progressive Democrats, a smaller version will eventually come to pass late this year or early next in our opinion and keep the annual deficits in the record $3 Trillion range for a 2nd year.

To support massive new spending programs and record deficits when the economy is growing faster than any time in modern history is not part of a rational debate. Passing this in 2020 in the heat of a pandemic induced economic lockdown under a Biden administration might have sailed through the halls of Congress. In 2021, Pelosi’s House of Representatives should expect long delays and enormous compromises to pass such crisis level spending. Swing voting Democrat Joe Manchin and other moderate Senators are unlikely to approve the level of spending and tax hikes envisioned. 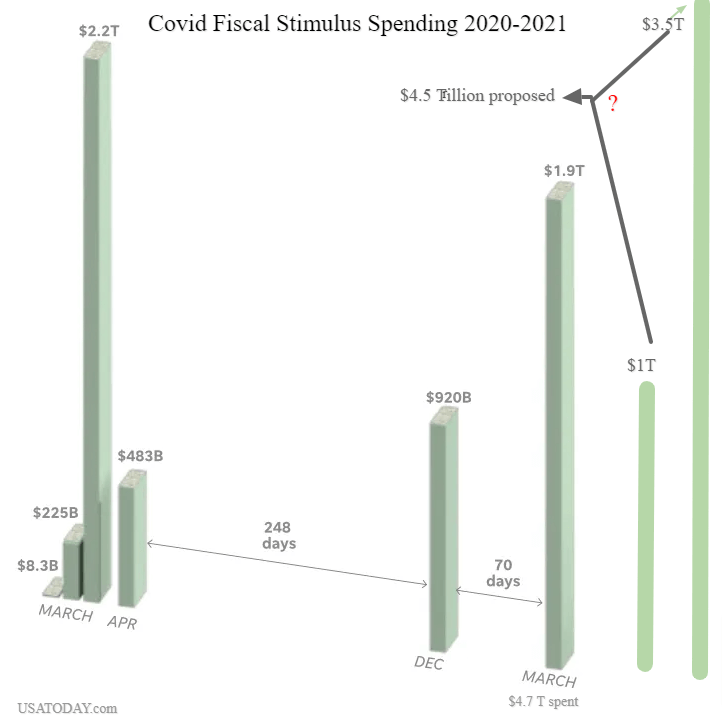 This quote by Joe Manchin today says it all: “Given the current state of the economic recovery, it is simply irresponsible to continue spending at levels more suited to respond to a Great Depression or Great Recession – not an economy that is on the verge of overheating,” Thus, we expect a delayed and reduced version of new stimulus which means the current forecasts for infrastructure stocks are overvalued and subject to more consolidation before values rise again next year. Look for dissention among Democrats to cast doubt on new spending bills and sharp equity corrections in the seasonally weak September – October period before we can safely add infrastructure companies to the portfolio. 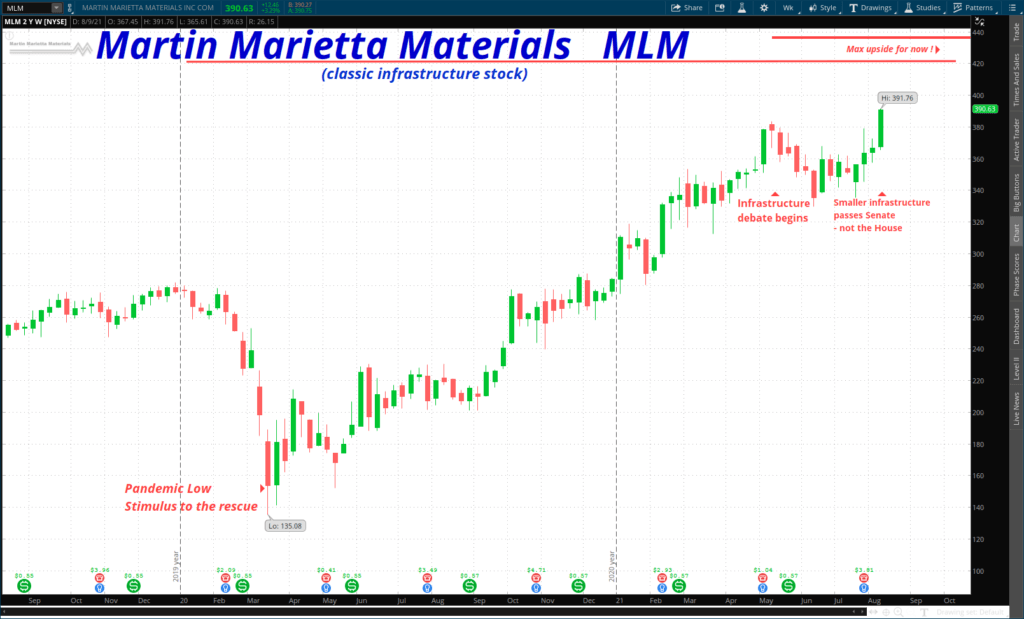