Investors have observed over the decades that trends in large capitalization compared to small cap stocks tend to shift back and forth in leading the general stock market. In the 1990’s Large Cap companies consistently outshined smaller companies when the Dollar was king. After the tech bubble burst, King Dollar was decapitated and Small Cap took the lead for most of the next decade. Those halcyon days keep money managers pining for the next shift back to small company leadership as if looking for hidden treasure. However, it’s been a long time since smaller companies consistently outperformed their wealthier cousins.

Since the fed induced Covid rally that began in March 2020, the only one brief period when Small Cap stocks jumped to the leadership board was in Q4 2020 through Q1 2021 as the Dollar fell. Otherwise, King Dollar has remained resplendent, which has severely depressed smaller companies with a more domestic focus.

Investors may be surprised that, throughout 2021, when technology and large cap stocks were en fuego, small stock indces were not just underperforming, but flatlining. During the final 11 months of 2021 the Russell 2000 small cap index was essentially unchanged and since the November 2021 peak the index fell 34% at their recent lows. It’s no surprise that this hit to debt heavy big tech and small caps occurred as interest rates had a parabolic jump higher and the Dollar appreciated to record highs as the Fed turned hawkish with Europe and Japan remaining dovish. 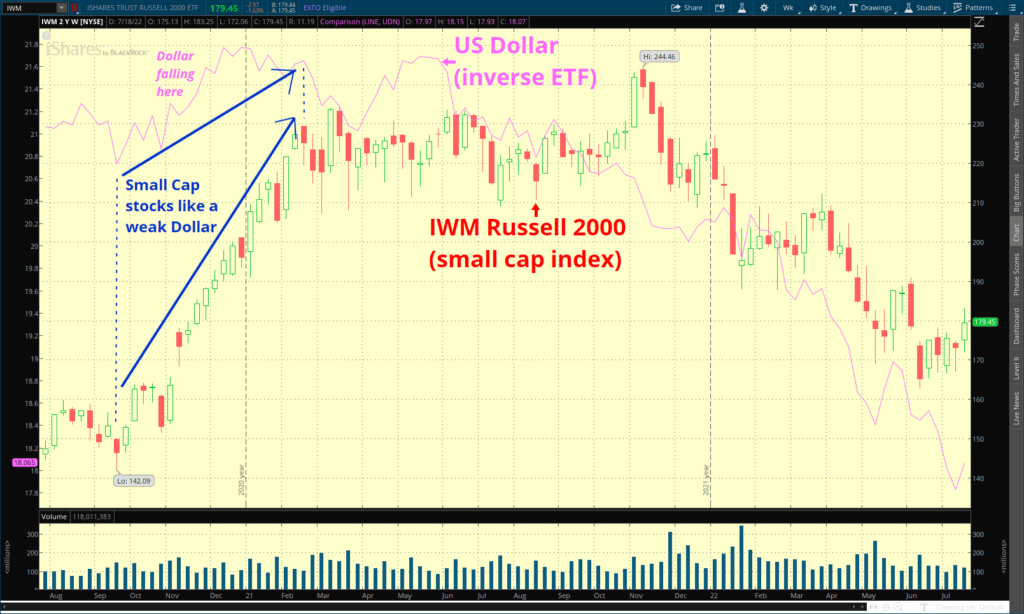 Understanding the intentions of Central Banks in Europe and the US can be instructive in forecasting the Dollar and its effect on technology and smaller companies. From 2012 to 2019, the easy money policy of Europe relative to the perceived and real credit tightening in the US, sent the Dollar higher. Once again in the later part of 2021, the market began reading the tea leaves that US Fed rate hikes would soon begin, which again propelled the Dollar on a record-breaking win streak compared to its trading partners. Europe seems to perpetually lag the US and appears to have finally begun to address inflation with higher rates this past week. This caused a Dollar reversal lower on July 15th. Significant Dollar deprecation awaits further market consensus that inflation is falling and an outlook that the Fed will soon hint at pausing its rate hiking cycle. For now, we expect more modest Dollar corrections in more of a trading range as the Fed needs considerably more evidence that all measures of inflation are moving considerably lower. The Fed’s 2% inflation goal applies only to the core Personable Consumption Index (PCE). This measure is in the mid to upper 4% range and falling as compared to the hyperbolic focus on headline consumer prices (CPI) that add back in volatile food and energy. The Fed will remove its hawkish rhetoric and the Dollar can fall more decisively when core PCE falls under 4%.

Thus, key proxy analysis for small cap stocks has to consider inflation, interest rates and how the Dollar will react to other currencies. The US Central Bank moved excruciatingly slow to stop its wildly inflationary stimulus program in Q4 2021 and Q1 of 2022. Such accommodative policies could have depressed the Dollar if not for our main currency pairs of Europe and Japan that continued to stoke inflation despite multi-decade highs if inflation. The US Dollar may have topped as investors see the sharp deflation in commodity prices and appear to be pricing in peak CPI and rate hikes over the next month. Seasonal factors favor the recent Dollar dip ending between July 29th and August 3rd before entering what could be carving out a trading range from recent highs into the Fall.

While it’s too early to expect a long-term Dollar depreciation that catapults small caps higher, the potential Dollar trading range ahead means small and mid-cap stocks should no longer be areas to avoid as their forward estimated price to earnings valuations have fallen to 11 on the SP small and midcap indices. Such a low multiple over the past 30 years has only been lower at major market bottoms in March 2020 and November 2008. The small cap Russell 2000 index with forward PE’s shown below is not quite as oversold, but it still illustrates that forward estimated price to earnings multiples rarely fall much further. 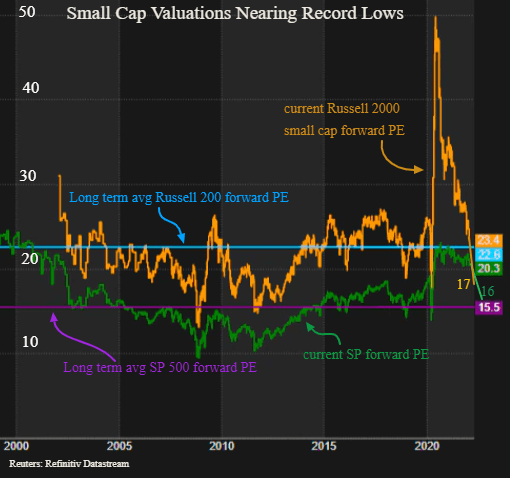