Investors and institutional money managers alike often fail to understand how macro trumps micro. With regards to microeconomic news, companies can have accelerating earnings and revenues, above consensus, yet such positive news can trigger accelerated selling if during a negative macroeconomic environment like 2022. This has been one of those years with mostly consensus beats on earnings and revenue that often attracts automated institutional selling on the positive news. It’s a case of Buying the Rumor and Selling the News. The macroeconomic concern this year is primarily inflation and the repercussions of higher interest rates and a slower economy. In June we saw a modest inflation surprise when CPI ticked up slightly to 8.6% and the Fed’s PCE inflation gauge actually fell to 4.7%. This slightly negative news was greeted immediately with a panic 4-day surge in the 10 Year Treasury yield to multi-year highs of 3.5% and a sharp stock market correction as the market repriced valuation multipes. In July the news was far more negative, with 9 and 11% CPI and PPI inflation reports. Instead of triggering an even greater pop in interest rates, yields actually edged lower on the news as the markets took the reports as a sign of peak inflation. Furthermore, Central Bank voting members hinted they would consider a higher-than-expected rate hike at the next meeting. There was no new news that would indicate peak inflation, yet the Bond market sold the rumor and bought the news. In this uncertain environment, when bad news is viewed as good news. it’s indicative of a market that is primed for a reversal —> higher stocks with lower Dollar and interest rates. 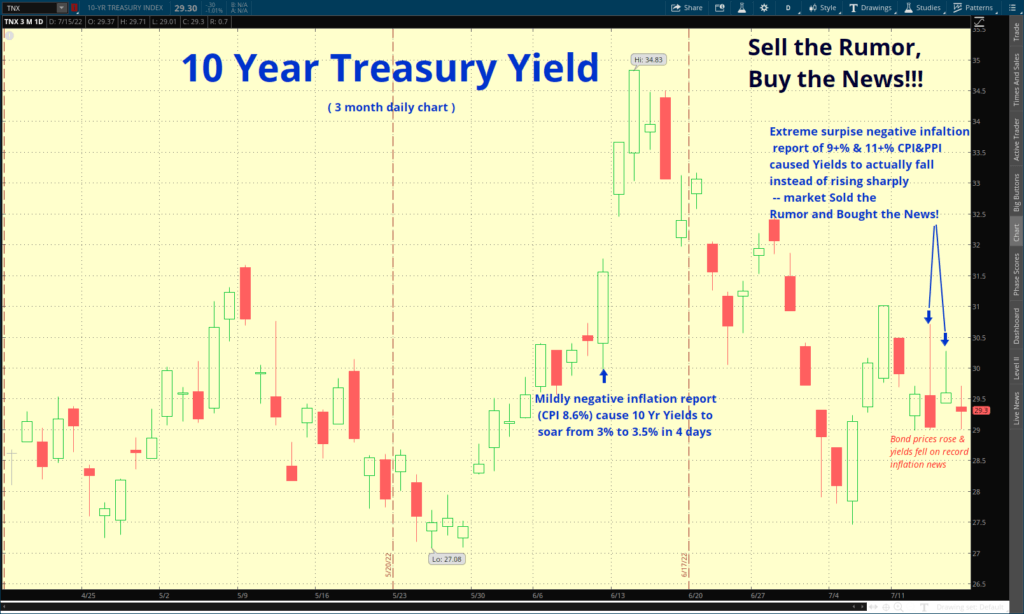 The reaction by stock investors supports the perverse falling Bond yield reaction to the surging inflation news. When the CPI news came out in June there was a surprise “over-reaction” by investors in selling off stock indices by 10+% in just 4 days. However, one month later in July, the far more Bearish news of almost double-digit inflation coincided with a modest rally in stocks instead of the expected plunge to new lows.

Looking at a 5-minute bar chart of this past week, we can see how the initial reaction to the inflation data caused the typical sharp corrections on July 13th and 14th. However, each sell-off was completely reversed within hours. This was a clear sign that money flows had discounted bad inflation that was peaking, which would soon lead to a less hawkish Fed. There were additional tea leaves foretelling an immediate rally in stocks, such as the calm volatility measures and falling Dollar after the “bad news” was reported. The positive news response action should have more room to run, but already stock indices are up 4% from their “inflation news” lows over the past 2 days. 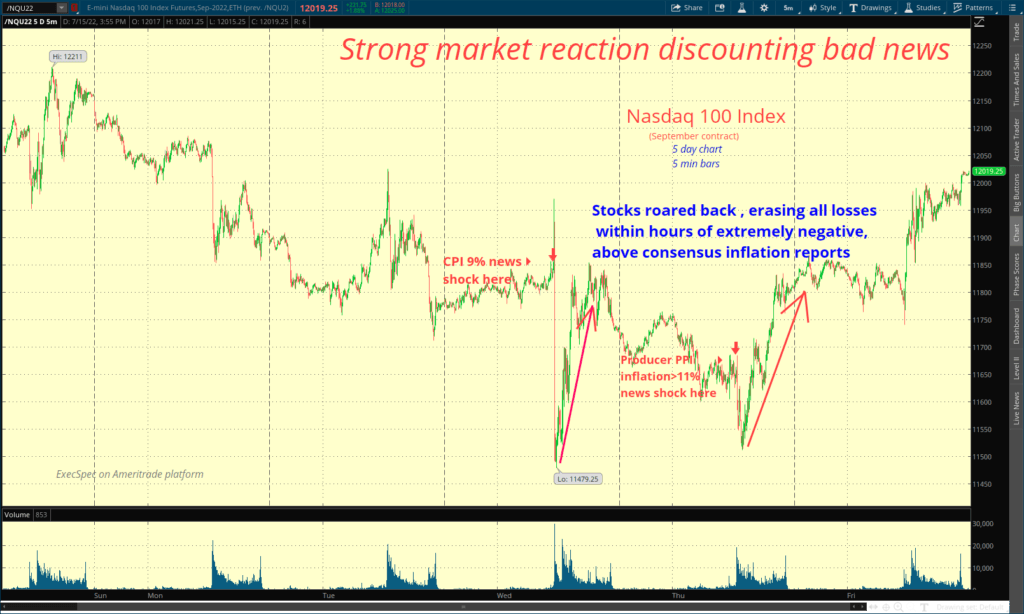 When excluding gasoline prices and adding in the deflating raw commodity prices that have been falling sharply this past month, investors have intuited that any bad news must be the end of the inflation spiral. The Fed must stay the course with further hikes until food and energy prices fall more sharply along with headline inflation, but the markets often lead Central Bank actions by one to three quarters. While the Federal Funds rate continues to climb, free market Treasury yields have been falling modestly for the past month already. The underlying market sees that, when excluding energy prices, most measures of inflation have been dropping each of the past 3 months. As we have talked about before, once Oil dips into the $80’s and average gasoline prices dip under $4/gallon ($4.54 now), then the markets will conclude that inflation has been tamed.

The summer stock market rally we were expecting from June to August remains valid, even if it has been more sideways than higher thus far. Risk of new lows later this year remains our base case due to the lengthy period of downward earnings revisions and weaker economic data that is required before the markets can fully anticipate when the Fed will stop quantitative tightening. The additional winter worry over a Russian energy crisis is an exogenous overhang the markets will also be watching intently that could interupt the falling inflation trajectory before the next Bull market begins in 2023.