It’s widely assumed that consumer spending and home buying will remain depressed while virus fears are elevated. When the US and most of the globe shut down their economies to slow the Covid pandemic in March, there was no time to examine unintended consequences. With a health emergency projecting Millions of deaths in the US and Millions more around the world, the economic fallout moved to the back-burner while the race to flatten the pandemic fatality curve raged. Now that death rates are falling, the focus is shifting to economic reopening, returning over 20 Million lost US jobs and quelling the cavalcade of delinquent loan and rent payments. Signs are already appearing that jobs are returning as continuing claims for those unemployed has fallen and hints that the momentum low for the economy was the first half of May. More historically awful numbers will keep arriving well into June, but the tea leaves are becoming more readable of an economy that is close to turning higher.

With an unemployment rate that could surpass 20% for May, mortgage delinquencies are fast approaching the 2009 subprime Mortgage panic peak. Currently we have a mini Depression statistically that is temporarily mitigated by Trillions in Government transfer payments and loan forbearance that covers over 9% of all mortgages. This number forgiveness of loans through forbearance will need to rise further and Mayors of many big cities have already prevented landlords and banks from collecting residential loan payments when Federal assistance expires.

The 80 Million homeowners in the US have mortgage debt totaling over $10 Trillion and over 5 Million currently require the new Federal Cares Act to avoid debt foreclosure on their home. With monetary and fiscal policy in full stimulus mode, this crisis is manageable as long as the economy continues to open and virus fears don’t rebound too far. 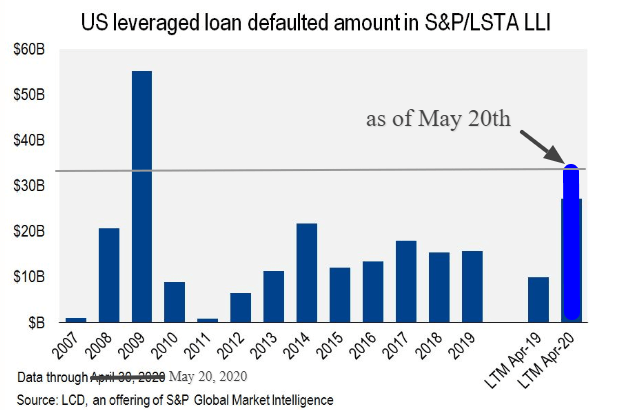 The current consensus of economists estimates a 33% GDP contraction in Q2 with a cumulative 19% reduction in output during the 1st half of 2020. Factoring in pre-pandemic forecast  production growth of $200 Billion during Q1 and Q2, it adds up to an estimated $2.3 Trillion in lost GDP goods and services. Fortunately, the Government is transferring $2.4 Trillion by the end of Q2 into the hands of consumers and businesses. While such income distribution is very uneven, if the Great Recession 1.5 multiplier is applied, then it replaces a major divot in economic growth and supports the record savings rate and pent up consumption evidence popping up now as the economy begins to open. Further recovery evidence can be seen in mortgage applications rising for the 6th straight week and 2% above year ago levels. Despite shutdowns and work from home edicts, home buyers surprised estimates this week with an increase in residential purchases with 140,000 more homes sold in April than expected. Home purchase applications this week are up 9% from the same week last year and 54% higher than early April, indicating that many buyers are undeterred by the depressed economy and incentivised by record low borrowing costs. While the stay at home economy may spur an exodus from city living to rural dwellings, the current strength in home buying is in the low income sector with the >$500,000 and >$750,000 home sales falling the past two months while the under $200,000 segment rose.

Mortgage rates have been falling for 40 years and the 30 year mortgage rate just hit a record low of 3.15% today.  Low rates, healthy income, Government handouts and full employment (until recently) support the affordability impetus to buy that starter home for a young family. Consensus forecasts currently foresee a steady economic recovery in the back half of 2020 with Unemployment falling from near 20% down close 10% or lower by year end. The Fed has assured us that borrowing costs will remain low until a firm economic recovery can be seen in the rear view mirror, thus an uptrend that employs a record 10 Million over the next 7 months should keep optimism and home buying supported.

The housing sector stocks, like many sectors, have become overbought and due for a worrisome correction. However, low housing inventories, Fiscal/Monetary stimulus, Millennial family formation demographics and record low mortgage rates augur well for home-building and suburban migration in the years ahead. Currently, both worlds of high unemployment and increasing optimism over consumption and home buying can exist together, as long as jobs steadily return through the 2nd half of the year. 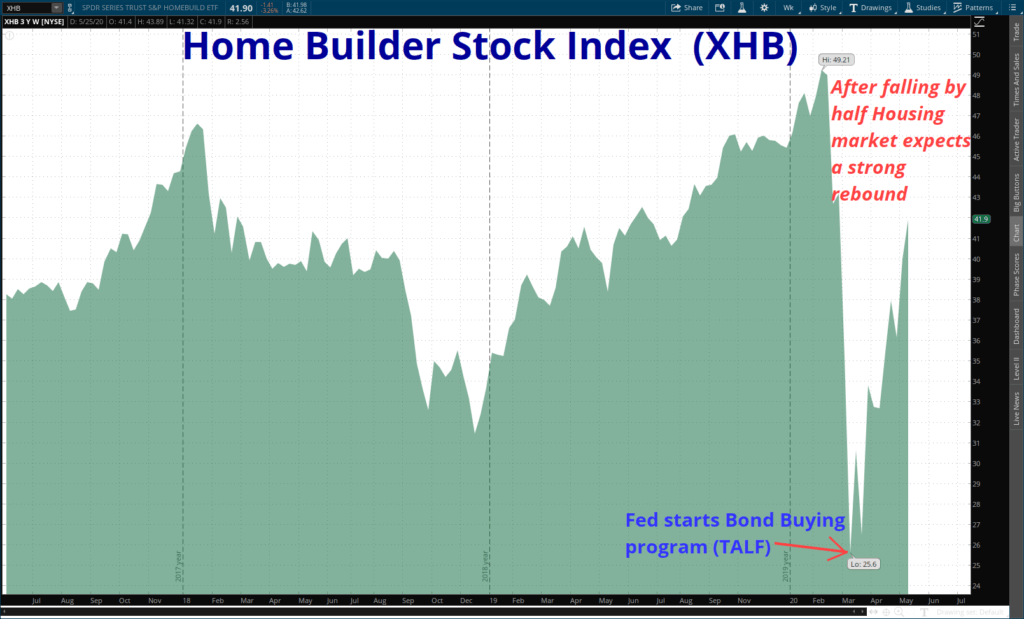 In the Fed We Trust

In the Fed We Trust
Ready to start creating financial success? START YOUR FREE TRIAL