In Search of Recession

It’s well known that bad news garners more attention than good. Record devastation from an approaching hurricane, burning down the rain-forest, financial panic in the investment markets are some of the recent hyper headlines sparking interest. Most of the time the bark is worse than the bite, as reality is better than feared. The dreaded “R” word has been in the news a lot lately with the arrival of an inverted yield curve that always occurs before a Recession. Thus, it’s interesting to see the huge spike in googlers searching for news about a pending Recession. The last time such browser activity surged from the depths of calm to the heights of calamity was in 2008, as a Recession was giving birth. While the current Google anxiety spike is worth noting and staying on high alert during this economic slowdown, having only a sample size of one to compare is thin evidence by itself. In the similar January 2008 spike in Recession anxiety, an economic contraction had already begun. Will August 2019’s spike in fear also manifest in a Recession and equity Bear market?

Perennial Bears add the ominous google search for Recession to a plethora of other bad omens: inverted yield curves, falling copper prices, weaker manufacturing/profits/freight shipments… and the list goes on. Yet these are indicative of a slowdown, not necessarily a Recessionary six month contraction.

What’s different this time than in January 2008? Our economic growth (GDP) was minus 2.3% in early 2008,  yet we are at +2% today with no hint of a contraction in the current quarter. Same store sales were growing under 1% in Q1 2008 on their way to zero, while today we remain consistently close to 6% growth. One more example is that Consumer Sentiment (Michigan Survey) had been crashing for 4 months as of January 2008 to under 77. Today it’s fallen to a still very optimistic 95.5. This is important as the consumer driven service sector accounts for almost 70% of our GDP

Others site Doctor Copper’s acumen in economic forecasting, stating that falling prices are indicative of a GDP contraction soon.  However, Copper fell more dramatically in the past without a negative GDP. In the 2008 Recession, Copper’s collapse arrived almost 10 months after the Great Recession began. Copper under $2 would be of concern that the industrial economy is contracting too sharply, but until the service sector stops growing, Copper may require more advanced schooling to be relied on for infallible forecasting. With the extreme oversold Copper Hedge Funds out there today, Copper prices may be heading higher, which could be a Bullish economic omen.

As for Yield Curve inversions where short term rates rise above long term rates, we have detailed in the past that this harbinger of Recession is more a symptom than a cause. Yields fall as a Recession approaches and free market long term yields fall faster than Fed influenced short term rates. Cheap money and falling interest rates as the economy slows is far better than the alternative. To further illustrate how this over relied upon indicator is behaving differently this time, note in the past that short term borrowing rates rose for 9 to 12 months after the yield curve inverted. This time short term yields began falling several months prior to the widely followed 10 year minus 2 year inversion. There is no guarantee that this time will have a different outcome, but the setup is not the same as with prior recessions. 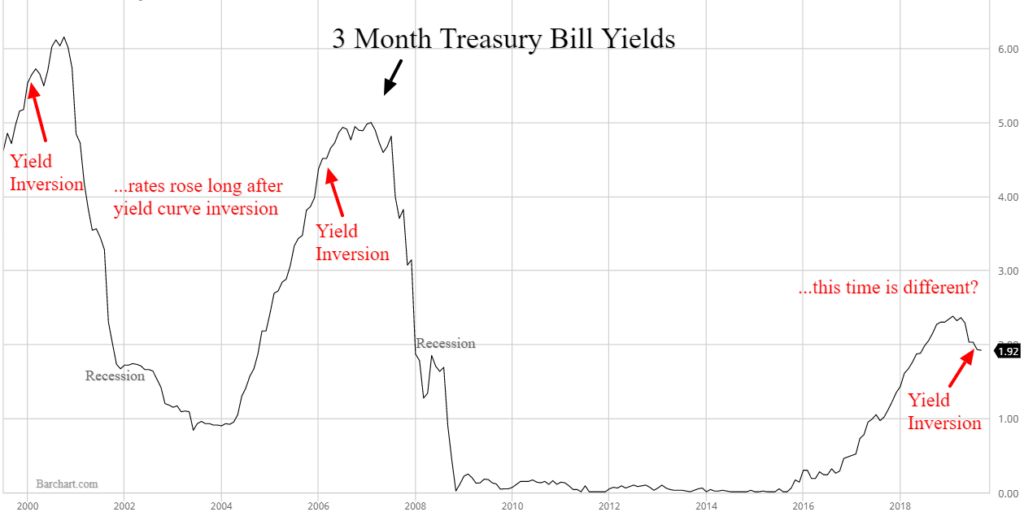 More good news is that Bank credit standards are acceptable, consumers are averaging over $15 Billion in new credit growth every month this year and higher risk credit cards delinquency rates remain near historic lows. The last time the Google search for recession occurred in early 2008, delinquencies were surging and triggered banks to tighten credit sharply.

Everyone knows that since 2018 a global slowdown has been underway and it can be challenging to know which of the tea leaves spell risk-on and which warrant risk-off. There are plenty of deteriorating conditions out there with a paucity of positive catalysts in sight other than extreme investor pessimism. Many are in search of a Recession, but until the consumer falters and labor weakens considerably, we look for the cyclical slowdown to taper off by late 2019 to early 2020 with ensuing modest economic acceleration into 2021.