For almost 1600 years Hong Kong was a part of Chinese dynasties. When more advanced Western countries asserted their dominance over Chinese trade, the Opium Wars were fought. The result was a humiliating defeat of China who ceded Hong Kong to the British crown in 1842. The British allowed China to regain official control  of Hong Kong (HK)  and nearby territories in 1997, satisfying a 100 year British promise, but Primer Minister Thatcher slipped in one last delay of game deal to preserve free market capitalism in HK until 2047. The 200 years of Western freedoms in HK  provides some context to the escalating  protests over mainland China’s attempt to change laws extraditing HK citizens to Chinese courts. As the Chinese economy and HK stress have risen recently, capital has been trying to escape Chinese capital controls and seek the safe haven of Gold.

With Gold and most commodities in the world priced in US Dollars, Gold and other precious metals move inversely. Since early June there has been a dramatic and rare break of this inverse Dollar Gold relationship. This run higher in price has coincided with the sharp escalation of HK protests. The safety trade in China along with the parabolic rise in negative yielding bonds may be sending more investors to buy Dollars and Gold and even even more Bonds which are all considered to be the most risk free assets in the world. Should the US Dollar actually fall, Gold will rise even faster. Below we show Gold and the Euro to represent the inverse Dollar currency.

In April and July we sent out reports highlighting the Bullish aspects of Gold and the precious metals group looking for a break above $1375 to signal a march to 1600 with pauses near the 1460’s and 1520’s along the way. The first 2 legs up have been completed and the current pause could complete over the next week setting up another push into seasonal highs due in early September. While the technical momentum is Bullishly embedded in overbought territory, we would wait for our primary target zone above 1600 before stepping away for a longer correction. The 1390’s is critical support for this long term Bullish breakout in Gold.

The 5 year Gold chart exemplified by the exchange traded fund of GLD illustrates the congestion pattern we were looking at supporting the forecast for $1,600 Gold in 2019 (150’s basis GLD). The hedging of Large Speculators and Managed Money are clearly in the normal overbought zone, however given the momentum in Gold hitting fresh 6 year highs, we favor record high hedge positions as shown here before Gold begins to melt. Normally Gold falls as economic conditions slow over fears of deflation, however we suspect the markets are not pricing in a 2008-2009 Great Recession scenario and suspect forthcoming stimulus will only boost the precious metals allure. 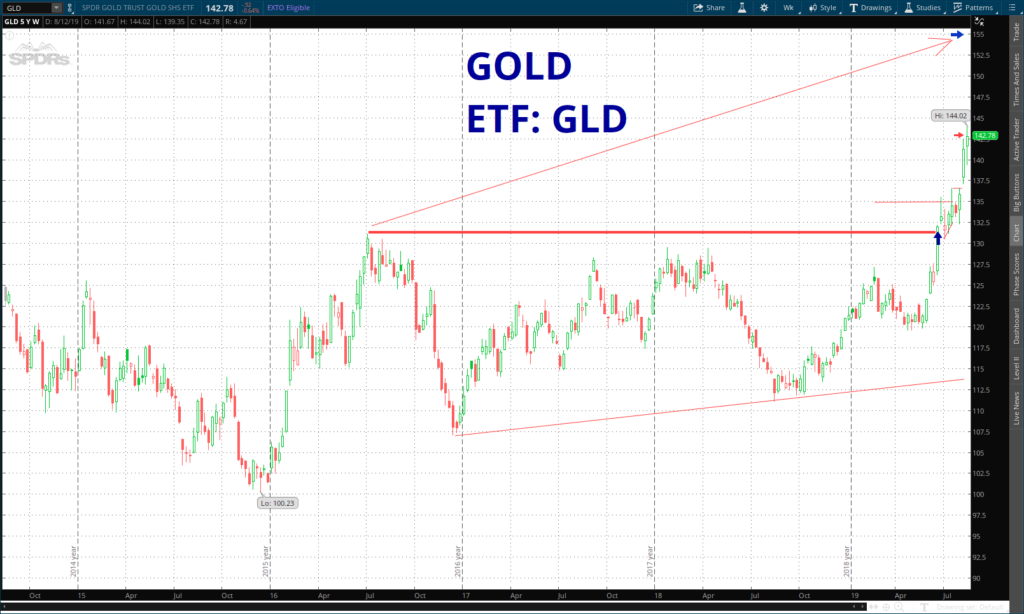