While we often downplay the importance of the inverted yield curve with short rates above long rates, there are many other warning signs of a slowing economy (GDP), weaker earnings and falling inflation. Bond yields have now fallen back to the moribund economic days of 2016 when the energy recession pushed the economy to the precipice of an overall recession with 2 quarters of 1 percent or less GDP. The major downtrend in Yields in 2011 also coincided with severe economic weakness with 2 of 3 quarters in contraction territory. Economic Bulls may doubt our expected slowdown by hailing the 3.1 percent GDP 1st quarter surprise as a sign this economy will continue to confound the consistently less optimistic economic forecasters. Economists have underestimated the Trump economy, stuck in their antiquated Phillips curve school of thought, but we believe their broken clock is correct in looking for sub 2 percent GDP growth the rest of this year. The 1st quarter performance was an aberration of higher exports and inventory that will be reversed. The stock market should heed the warning of falling interest rates and remember that when the Fed begins cutting rates, it almost always coincides with a recession. We expect a protracted period of slow economic growth, but no recession unless the trade war escalates again. Stocks have been climbing the classic wall of worry, but will be challenged to continue setting new records beyond July without significant progress on the Trade War with China. 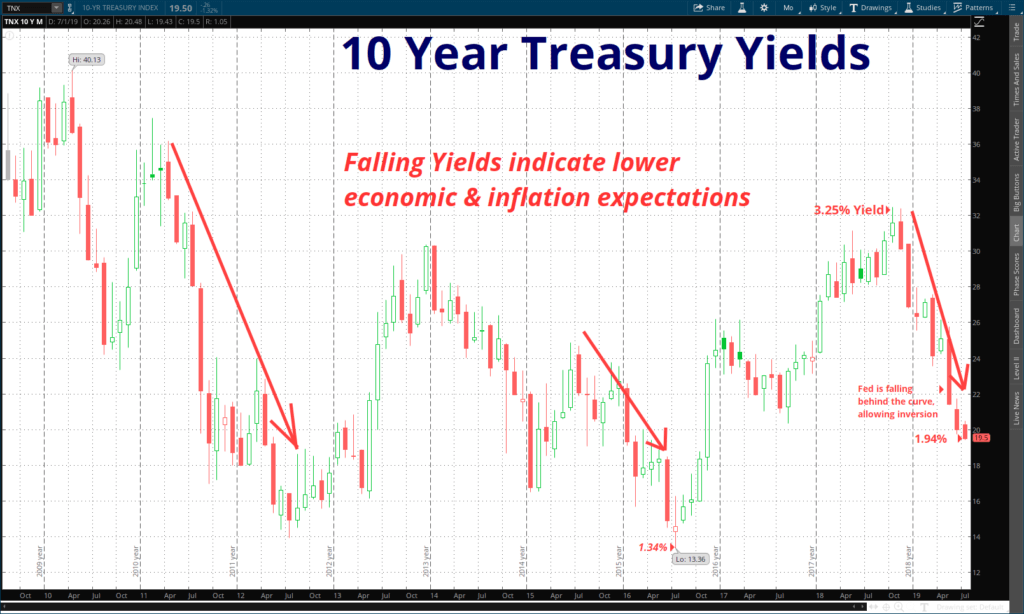 The US expansion is now the longest in history and many continue looking for the exit to a recession that seems overdue. The Aruoba-Diebold-Scotti (ADS) business conditions index is a compilation of the Philadelphia Federal Reserve Bank indicators that provides a comparative measure of the economy. In this long view we can see a common threshold (red line) when conditions contracted enough to tip over the economy into a contraction. In late 2015 and late 2018 we were on the verge of panic, but rebounded in time before irrational emotions could take hold.

It’s too early to declare the all clear signal given the widespread indications of economic slowing, but a move in ADS above the zero line would be encouraging. Conversely, a return trip back to the recent lows in the ADS would be a bad omen that may finally scare consumer spending in this record setting economic expansion. 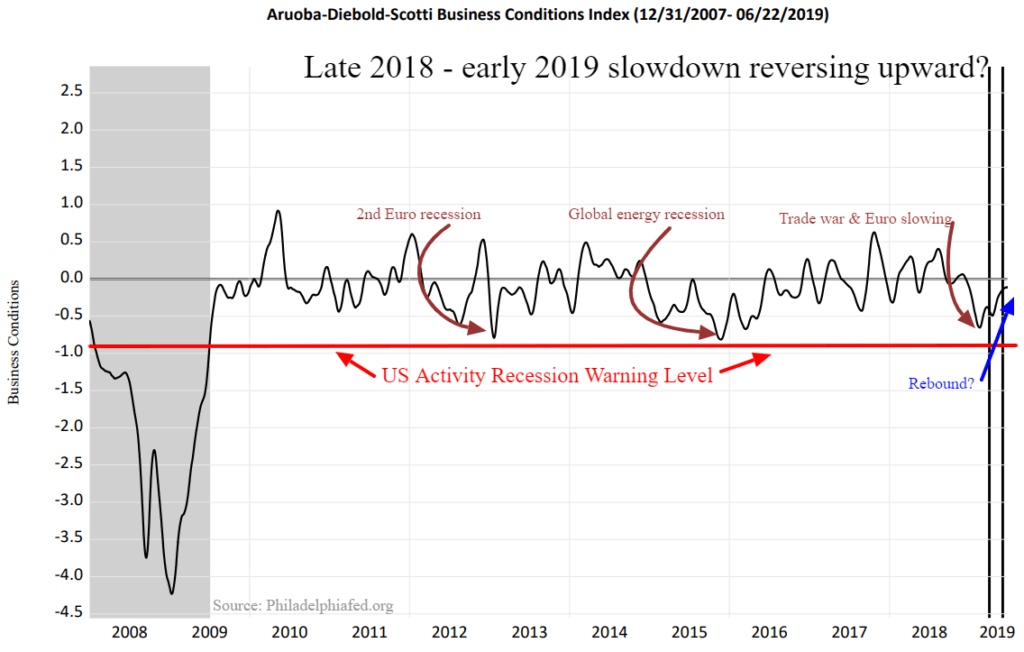 The US manufacturing expectations have fallen sharply over the past 7 months to a no growth outlook according to Markit Purchasing Managers Index (PMI).  Other than some upticks in June production and employment components, most measures of manufacturing are now in rare contraction mode, joining the Global PMI on Recession watch. While US Manufacturing is only 12 percent of our economy, the much larger Service sector unfortunately has mirrored the demise of industrials. Stock investors expecting a 1st quarter repeat of upside GDP surprises well above the current 1.25 to 1.75 percent GDP consensus, should be disappointed when the GDP report arrives July 26th. Other than geopolitics regarding successful trade war resolutions, it’s very difficult to see catalysts that would turn the economic tide higher until the markets become oversold.

In summary, we have flat to contracting service and manufacturing portions of the US and Global economy attached to the storm clouds of Global Trade Wars that elevate uncertainty and curtail capital spending. During a previous period of such obvious economic weakness in 2015, when no Trade Wars or inverted yield curves existed, we experienced the longest stock market correction of this 10 year Bull market. The obvious investor question today is: why are stock indices powering to record highs amidst the gloom of very slow economic growth and falling corporate earnings? We think this ebullient investing environment illustrates the underlying investor penchant for hope and positive change buoyed by ample bank reserves and consumer financial strength. In layman terms, there remains a lot of cash out there creating a very low financial stress environment. Debt defaults are low, debt service payments as a percent of income remains at record lows with an economy near full employment. The only credit warning we see is that banks are tightening credit standards for credit card holders which should slow consumption trends.

Eventually, protracted declines in business spending and consumer credit tightening will infect our resilient consumer led economy, which is why the only game changers in town are Central bank rate cuts and a resolution to trade wars. Currently investors may keep a bid under Bond and stock prices into the end of July when the 2nd quarter GDP numbers arrive and the Fed meets for the widely expected rate cut announcement. A reversal lower in August due to a failure to meet interest rate expectations is likely as many now expect a double Fed rate cut of 50 basis points at month end.

Window of War Opening with Iran