Record Economy: This Time Is Different?

“This time is different” are four famous last words considered by famed fund manager John Templeton to be the most costly phrase in history for investors. Prominent economists Reinhart and Rogoff have written extensively that throughout history cycles repeat in a similar fashion with excessive debt creation for economic growth until the elevation of risks from inflated assets create bubbles that eventually deflate in a massive crisis of confidence and asset destruction. This sets up another famous phrase by Spanish philosopher Santayana, “those who cannot remember the past are condemned to repeat it.”  There is no disputing the logic behind these well worn aphorisms and centuries of human folly that support their validity. However, this time is different in some respects. No, we haven’t repealed the business cycle and we expect doom and gloom recessions will return as Reinhart and Rogoff imply- someday. We also have many first time milestones this cycle that are different. Since World War II economic expansions have averaged 5 years before a recession. The previous record of 10 years in the 1990’s was an historic milestone that has now been easily eclipsed today with almost 10.4 years of uninterrupted economic (GDP) growth.  At the 5 year mark of the economic cycle in 2014, prognosticators began proliferating with proclamations that the end was nigh. These outcry’s have continued with an annual ritual of catchy phrases such as our economy is “in the later innings”, which appeals to our cultural sports addiction. Or we are “long in the tooth” just as older horses have longer teeth, before they die. These lazy expressions may eventually appear sage in hindsight, but lack depth and tend to heighten fear amongst investors. We are in an era of massive fiat money created out of thin air boosting debt levels beyond any expected risk metric from earlier decades. It doesn’t mean we have reached a permanent plateau of prosperity, such as proclaimed in 1029, but the Governmental and global Central Bank response can push risk metrics to extremes that were not conceived just a decade ago. The growing debt vulnerability keeps Western World Governments in a more proactive state of stimulation, pulling out every fiscal and monetary weapon in their arsenal to prevent an even greater recession than the last one. Without the massive accommodation since 2009 around the globe, who knows how short this growth phase would have been. However, economic expansions have no set end date, as Australia has demonstrated with 28 years of uninterrupted GDP growth. Thus it’s naive to blindly assume that US economic Bull market can’t continue much longer. Could this time be different? It has already been different with over 124 months without recession since our 2009 nadir.

Yield Curve inversions triggering a recession has been another investor focus that may be different this time. Yield inversions with short rates yielding more than long rates may always occur before a recession, but that doesn’t mean they are the cause. It often means that Government influenced short term yields are slower to fall compared to longer term free market yields as the economy slows. Inverted yield curves are commonplace in the expansion cycles of most countries, thus before any recession there is likely to have been an inverted yield curve. These inversions may occur with a 1 year, a 5 year or much longer lag, but inverted yield curves will precede contractions – eventually, however that is the effect, not the cause of a future recession. While Canada and many European countries show varying lag times from inversion to recession of a few years to over 10 years, Australia holds the record at over 2 decades without a recession despite multiple episodes of inversion. Short term rates above long term rates is not a dog whistle of an imminent economic contraction. Could this time be different? 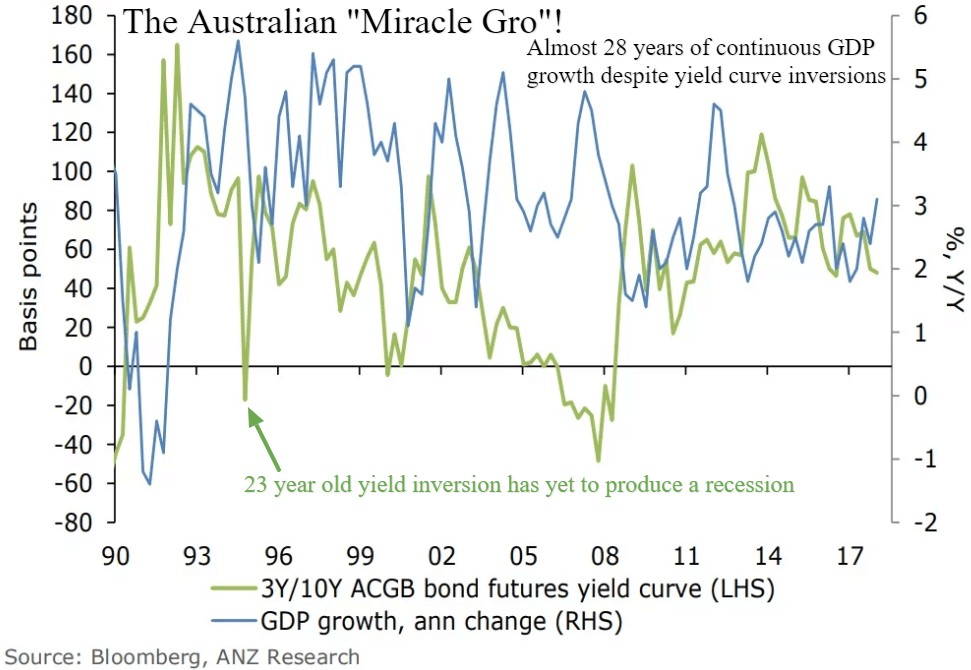 Since free floating currencies arose in the 1970’s, debt levels keep climbing inexorably to new records along with more relevant debt to GDP ratios. It’s common to associate rising debt with greater risk without consideration of underlying assets and income or even expenses. While many debt metrics today have breached levels of risk considered to be a harbinger of doom in previous expansions, more critical debt service ratios are still very manageable. Annual debt to annual GDP is still at an historically stable 5% ratio and the more critical debt service ratio of debt interest expense to GDP is just 1.6% after consistently touching an elevated 3% back in the 1980’s and 1990’s. Record Government debt headlines may appear every year, yet debt service ratios are normal. Could this time be different?

An even brighter picture emerges from the consumer sector despite a borrowing binge. Even with continual new record highs in home prices and mortgage debt held by home owners, the cost of servicing this debt keeps hitting new lows, at 4.1% today. With an exceptionally strong labor market, high savings rate and rapid wage growth there are no tea leaves yet forecasting a consumer debt crisis domestically. In the past, home prices and mortgage debt as well as the debt service burden have risen in unison to new record highs. Could this time be different?

The manufacturing sector has now witnessed multiple contraction phases during this record GDP expansion cycle, yet none have coincided with recessions as in the past. The stock market has been deemed to be in a Bull market, a somewhat arbitrary label, for a record 10 years and 8 months…and counting. Perhaps this time is different. This may not be what Reinhart and Rogoff  were thinking with respect to the business cycle progression from parsimony to profligate America, which in some form will be entrenched for eternity. However, we should look deeper before asserting the end is near just because historical measures imply we deserve to have a recession as we are overdue. As Clint Eastwood said, “deserve’s got nothing to do with it”.