Governments around the world have mandated a deep global recession! To better nuance such a preposterous sounding statement we would say the US and all Governments fear the COVID-19 virus more than an economic contraction and have determined that the only way to slow this pandemic is to severely restrict movement and economic activity, triggering a Recession. School classes, theaters and sports at all levels in the US are being canceled. The business and vacation travel industry has been shuttered. There is talk of quarantining the entire nation in their homes until this pandemic passes in a few months. The byproduct of such actions create fear and panic that will escalate until the virus peaks and begins inflicting fatalities at a reduced rate. The US and all afflicted nations have instituted massive fiscal and monetary stimulus actions that have had no effect calming investors or boosting the economy. No amount of money can instantly cure COVID-19 and normal life can’t resume with the Government stepping on the gas pedal while also deliberately applying the brakes. The economy (GDP) will contract at least short term and the lack of guidance or earnings clarity by companies have sent the stock market into free fall for the past three weeks. Fundamental and technical indicators or past comparison charts of the stock market provide little clarity when viewed through the prism of the COVID-19 pandemic. Investors need to watch these COVID-19 charts (below) when they begin to plateau. Then the world will anticipate a major recovery and optimism will return to the investment markets. 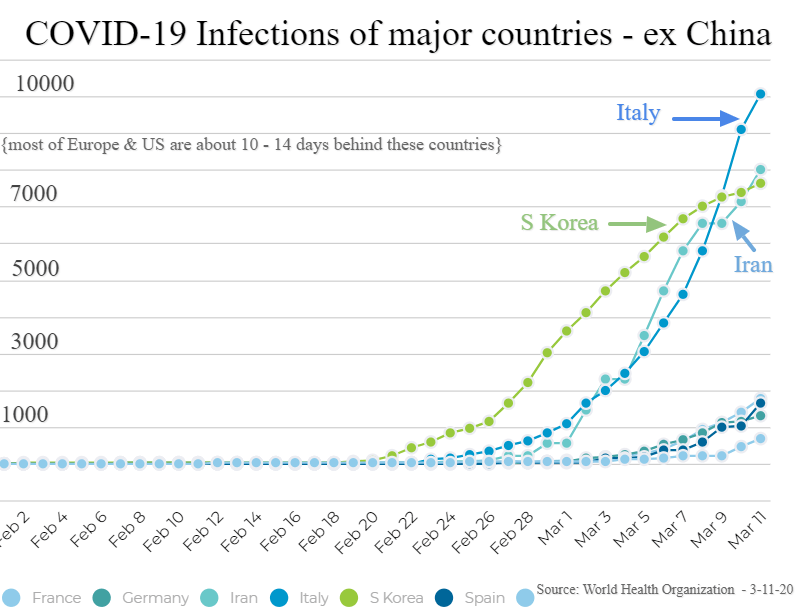 Other than the large but untrustworthy data from China, most of the contagion resides in Italy, S Korea and Iran. There are signs that other Western countries are following a similar infectious growth pattern with a couple week delay, thus it will be instructive to see if the same acceleration path of contagion occurs over the next couple of weeks in the US, Germany and elsewhere. Germany has estimated a potential 58 Million of its population will eventually test positive for Coronavirus, which would imply well over half a Million deaths under such extreme assumptions. Relative to the common flu from China, the contagion and death rates of COVID-19 are quite subdued thus far. The World Health Organization and our Center for Disease Control (CDC) continue to sound the alarm and estimate infections in the 100’s of Millions and fatalities in the 10’s of Millions globally. Such extrapolations seem chimerical given the current data progression and with warm weather just weeks away, perhaps there is hope for a path to normalcy appearing before summer. 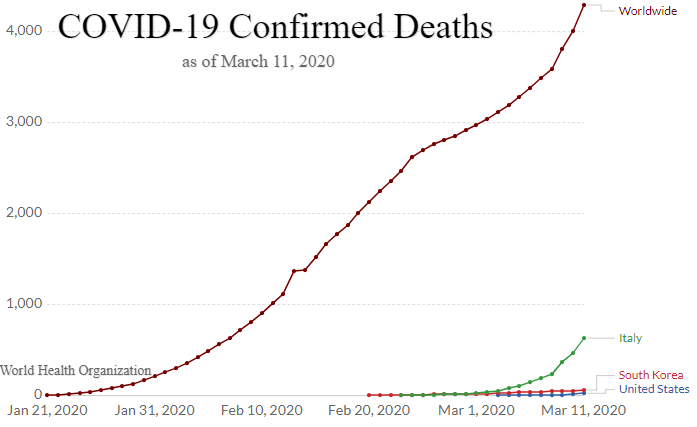 Meanwhile stock investors have been crushed with indices down almost 30% in just three weeks. We expect a significant initial bottoming area in stock indices to occur within 5% either side of their late 2018 correction lows; the Dow is there now. Forecasting the terminal price levels that will stop this Bear market decline during such a biologic panic is a bit fanciful until buyers and sellers begin to equalize in a more sideways bottoming pattern. More important than price is time at this juncture, as there is no shortage of bargain basement prices on many blue chip companies. No level of discounted cash flow valuations or oversold sentiment is as relevant as the slope of the Coronavirus mortality growth rate. A likely passage of another stimulus bill on Friday March 13th after a 31% correction in the Dow (DJIA) has sent the index up over a thousand points on the rumor and may even allow for some sideways to higher price action over the next week or so. However, until the progression line on contagion and mortality of COVID-19 flattens, rallies will be difficult to sustain.

Last November we shared a chart (outlined below in Blue) indicating a possible breakout that would take the Dow to a major peak in the mid-29,000’s. As our target was being reached we began calling for a normal Bull market top in late January or late February triggering a healthy 5 to 10% correction. While the price top and timing were accurate, the shock drop since then due the exogenous Coronavirus breakout had no initial downside clarity. Our outlook adjusted for the virus has been for a correction lasting one to three months, similar to most historical Virus progressions. Recent forecasts still favor this market collapse to lead to a brief but powerful GDP Recession ending this summer ideally. The stock market will anticipate a Bullish economic turn higher and form a bottom in the April to May time frame from our current perspective, for which a significant cash investment reserves should be maintained. Fine tuning such an end to this investment panic will become more apparent as COVID-19 reaches a climax in its spread for this flu season. Continued contagion acceleration into the summer would send stocks even lower once again over fear that the Global Recession will deepen. For now, Government mandates backed by world health authorities almost guarantee there will be a major contraction in our economy at least short term. The good news is that leaders around the world will keep trying to counteract this mandated Recession and throw massive monetary and fiscal stimulus at the economy until the Virus runs its course creating pent up demand. This will provide an abundance of fuel to power stocks and commodity markets higher once the fear phase subsides.